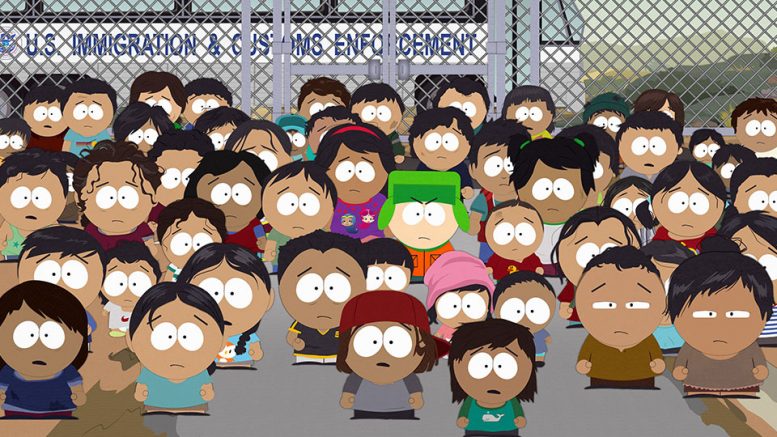 Pop culture TV shows such as "South Park," "The Simpsons" and "Family Guy" use their platform to criticize the negative impact and response of immigration laws in the United States. (Photo courtesy of South Park Studios)

On Sept. 25, Comedy Central aired its first episode of the 23rd season of “South Park,” titled Mexican Joker. In this episode, Randy Marsh defends his ‘tegridy’ (the name of his farm) while Kyle Brofloski is in an immigration camp, where he convinced the ICE members that they are taking part in creating a ‘Mexican joker’ by separating out the children from their families and forcing them to live under harsh conditions.

“South Park” doesn’t pull its punches, and makes it quite clear that immigration system is racist, and separating families is a terrible thing to do. The only way for people to understand the issue is by dumbing it down so anyone can understand its main point. What most people don’t understand is that separating children from parents is a monstrous thing to do, and doing so might cause more problems, all caused by the intolerant. By addressing this in such a public manner “South Park” reveals the problem that is still occurring.

This isn’t the only episode of “South Park” that parodies immigration, the episode Goobacks from season eight parodies immigrants and cheap labor, while the season 19 episode, Where My Country Gone, parodies President Donald Trump’s policy on immigration as well as his wall idea.

“South Park” isn’t the only show to address immigration. “King of the Hill’s” season two episode, “Three Days of the Kahndo” depicts its titular characters crossing the border. On “Family Guy”  Peter Griffin lost his job because he was an immigrant and on “The Simpsons,’” Apu was also under the threat of being deported.

There are even shows that immigration or living near the border are part of the main plotlines, including “Bordertown,” “Cop Craft,” and “Carnival Row.”

Popular culture is often on the side of the immigrants, revealing that ICE, Trump and anti-immigration supporters to just be angry racists who are pointing fingers at others to hide the fact that maybe it is the Americans who fail themselves. That is what modern television shows are trying to illustrate and hopefully educate the people spending their time watching TV.

Immigration is an ongoing issue that has been parodied a multitude of times. In the majority of these shows, America is depicted as a land of the free, with laws that protect the people, national security, technology that separates the US from third world countries and the ability to keep a living wage, hence why the majority of immigrants want to live here. Who can blame them?

In 2015, near the beginning of his campaign, Trump tweeted a lot of anti-Mexican, anti-immigration and pro-wall tweets.

He also used this line for his presidential candidacy announcement.

The US Customs and Border Protection themselves have made a chart depicting a fall in illegal immigrant arrests throughout the years. Are immigrants sneakier than before, or is it more realistic that they choose to come to the US legally?

Certain organizations dedicate time and money to collect data. The Cato Institute is a think tank that is libertarian in its political philosophy, and advocates a limited role for government in domestic and foreign affairs as well as a strong protection of civil rights. The Cato Institute, among others performed studies with the basis on immigration to find slander and libel.

In a 2017 study, the Cato Institute found that immigrants are less likely to commit crimes than native-born Americans in a research brief titled, The DREAMer Incarcerated. Some could say that they are being arrested at the border before they can commit any crimes, but couldn’t the immigrants just try not to commit crimes?

In a 2018 study, the Cato Institute also found in its research brief Immigration and the Welfare State: Immigrant and Native Use Rates and Benefit Levels for Means‐​Tested Welfare and Entitlement Programs, that immigrants are less likely to use public assistance. And, in a 2011 study, the Organization for Economic Co-operation and Development (OECD) published a paper, The unemployment impact of immigration in OECD countries, which found no connections to unemployment and immigration. Likewise, in a 2014 policy brief titled The Fiscal and Economic Impact of Migration, the OECD also found certain correlations between immigration and wages.

Knowing the common arguments against immigration, these studies and collections of data prove that immigration is a witch hunt and such overreactions to a non issue must be ridiculed.  The majority of the issues of wellbeing in the camps, can be correlated with being in camps too close to each other, but more information is needed in order to address properly.

Trump signed an executive order to end the separation of children from their families in June 2018, but it hasn’t truly been stopped and thousands of children are still separated from their parents, with the number still rising.

By showing data to prove that arguments against immigration are incorrect, and using the lessons that the television shows address, it adds up to stand with the immigrants, pro-immigration is on the right side of this political argument. If “South Park” portrays an organization on an antagonistic side, there is a reason for it.

Be the first to comment on "Pop media takes on immigration"