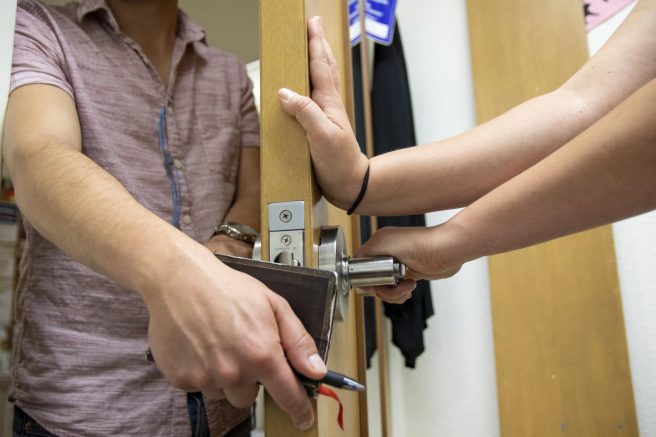 After several requests to speak to people within the UNITE and the Equity Departments about the controversial sign, the Current was repeatedly ignored or told to direct their questions elsewhere. (Photo by Emily Mello)

By the school’s own admission, it was placed there by a group of UNITE interns — who are paid employees of the college.

While these interns are encouraged to dig into complex and touchy concepts surrounding race, gender and social justice, and told to be bold and passionate about these topics, according to their own description on ARC’s website, it does not mean that they are infallible.

When they posted that sign, they targeted every single black male student attending ARC and created an unsafe learning environment for untold others, violating the fundamental principles of a learning institution. The administration responded by supporting the intern’s work, but refused to publicly clarify what prompted the flyer, instead only providing vague, roundabout explanations about the complexities of the context behind it.

A spokesperson for UNITE would later say the sign was posted as a result of internal dialogues about misogyny and sexism in the black community, and referred to an unknown incident that prompted the posting—but nobody who saw the sign knew that.

The message unclear, the sign hung on display for over a week. A discriminatory sign posted in a public office by paid school interns, with the administration’s blessing.

At best, it irresponsibly attacked an entire group of vulnerable students, and at worst, it was school-sanctioned hate speech.

When people, not surprisingly, started to take offense to the sign, multiple campus officials told staff and students that anyone insulted by the message should talk to them personally, forcing students to schedule meetings with faculty inside the very office where the sign was displayed.

Furthermore, when the Current reached out to multiple people from both UNITE and the Equity Department, to determine the cause and meaning of the sign, we were met with resounding silence or rerouted to a single source, Joshua Moon Johnson.

It became clear that the administration wanted to keep the fiasco quiet and try to control the narrative internally.

It is unacceptable for a college administration to condone this kind of targeted rhetoric toward one of its most vulnerable populations and then force them into closed door meetings if they are offended.

Internal faculty emails show that dozens of staff members argued about the sign and its intentions, with some labeling it as hate speech and others expressing that they were flat-out confused about what the sign even meant.

In response to this, administration and faculty members involved with UNITE refused to explain what the flyer was about, saying they didn’t want to reveal the reason why the sign was posted, because it could lead to misinformation—despite allowing the sign to hang in a public office without context, which in and of itself allowed nothing but misinformation and confusion to grow.

As word of the sign spread to Twitter and Reddit and the controversy grew, campus officials decided to hold a closed door Brave Space dialogue to try to clarify some of the context and provide a space for people to open up about how the sign made them feel. No members of the press were allowed in that meeting and the meeting was not announced publicly, save for the private faculty email thread that had been circulating.

It wasn’t until CBS13 showed up on campus that ARC President Thomas Greene decided the sign was worthy of public comment to those outside of the faculty emails, sending out a mass email to all students and faculty a day after the segment aired on TV—well over a week after it was originally posted.

“On behalf of the college, I want to formally and officially apologize for the hurt and pain some of you may be feeling as a result of the poster that was discovered on campus,” Greene’s email read.

This was a non-apology.

The sign was not “discovered” on campus, it was posted by paid interns with approval from faculty within the UNITE center and then defended for over a week by administration.

To ask someone who was hurt by the flyer to enter the space and talk with the people who are responsible is an unempathetic approach and to dictate how someone should express their concerns or hurt is manipulative and the administration is guilty of both.

In fact, a campus official told the Current that the person who originally took a photo of the sign, should have shown “humility” and tried to resolve the matter internally before posting the picture.

However, when signs reading “It’s okay to be white” were found posted on campus last year, Greene sent out an email that same day proclaiming that “hate has no home on our campus. We recognize that such language causes fear and anger, particularly for those who are the target of such messages. Everyone in our community deserves a safe and welcoming environment free from hate.”

Yet he remained silent as masuline black men were targeted by his own staff and held his tongue as his administration defended the sign.

The absolute lack of transparency over something that can be damaging to students is alarming. The school is more interested in saving face rather than actually dealing with the repercussions of allowing the sign to be posted, still leaving students and faculty in the dark to speculate about what actually happened and why the sign was allowed to hang in the school’s Community and Diversity Center for over a week.

There has been zero accountability. A closed door dialogue, a superficial apology and a refusal to speak to the media have not done anything to repair the loss of trust caused by the poster, if anything, they’ve added fuel to the fire by trying to distance themselves from responsibility.

Greene, the Equity Department, and UNITE need to hold themselves culpable for having abused the trust of their students.

Be the first to comment on "Current Editorial: Administration responds poorly to controversial flyer"