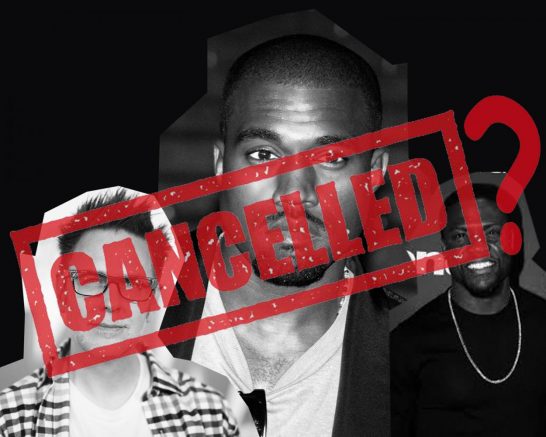 Cancelling a celebrity doesn’t lead to the end of their career. (Photo Illustration by Ashley Hayes-Stone)

It can be difficult to define what it means to be “cancelled,” because just like every other child of the internet, it exists in a nebulous, fluid state. To paint in broad strokes, being cancelled is to be rejected by some people on the internet, and it usually begins on Twitter. Common motivations for cancellation are sexism, racism and homophobia.

It is next to impossible to track whether or not the people who take to Twitter to cancel celebrities actually proceed to boycott the celebrity’s work and pull support from them, but it is easy to see that the general public does not follow their lead. At worst it’s a digital slap on the wrist, and at best, the real-world effects are impermanent. Why? Because some people can’t stop themselves from still liking those cancelled.

Among others, Kevin Hart, Sarah Silverman, Taylor Swift, James Gunn, Kanye West have all been cancelled. Some may be news to you, because cancellations rarely have any real effect.

In May 2018, rapper Kanye West said, “When you hear about slavery for 400 years … For 400 years? That sounds like a choice,” according to an interview with TMZ. Naturally, he was cancelled. Then, exactly one month later, he released “Ye” which went on to be the No. 1 album in the country, according to the US Billboard 200 album chart.

When comedian Kevin Hart was announced as the host for this year’s Academy Awards it was immediately met with backslash. People said that he shouldn’t host the Oscars because he had never apologized for homophobic tweets he made between 2009 and 2011.

Just days after the announcement, the Academy of Motion Pictures Arts and Sciences qualified its offer: Apologize for jokes and comments, or step down.

In an Instagram video Hart said, “I’ve done [addressed the jokes]. I’m not going to continue to go back and tap into the days of old when I’ve moved on and I’m in a completely different space in my life.”

Hart didn’t host the Oscars and as such this could be seen as a successful cancellation, yet he was still named the highest-earning stand-up comedian of 2019, making $59 million, according to Forbes.

James Gunn directed “Guardians of the Galaxy Vol 1” and “Vol 2” and was hired to direct “Vol 3” until old social media posts by Gunn making jokes about pedophilia and molestataion were dug up. The tweets were discovered by Mike Cernovich, the same man who created “Pizzagate” the conspiracy theory in which Hilary Clinton ran a child-molestation ring out of a pizzeria.

“The offensive attitudes and statements discovered on James’ Twitter feed are indefensible and inconsistent with our studio’s values, and we have severed our business relationship with him,” Alan Horn, Walt Disney Studios chairman, told the Hollywood Reporter.

Horn’s statement held true from July 2018 to March 2019, at which point Disney hired Gunn back. In the interim, a “cancelled” Gunn apologized repeatedly and continued to have a successful film career, directing Sony Picture’s “Brightburn” and being hired by DC to direct “The Suicide Squad.”

These cancellations have been detailed because they are the largest, most headline-making, “impactful” cancellations. Even these, the cream of the crop, were clearly not that detrimental to the victim.

Here’s one that was.

Shane Gillis was announced as one of three new cast members hired for the 45th season of “Saturday Night Live” on Sept. 16. Four days later, he was fired and cancelled for videos in which he used racist and homophobic slurs on his podcast. Gillis did not explicitly apologize.

“Of course I wanted an opportunity to prove myself at SNL, but I understand that it would be too much of a distraction, I respect the decision they made,” Gillis said in a tweet.

“The language he used is offensive, hurtful and unacceptable,” said an SNL spokesperson. “We are sorry that we did not see these clips earlier, and that our vetting process was not up to our standard.”

Gillis probably will not be the highest grossing stand-up comedian of 2020, chances he will release a Billboard chart-topper are low and almost certainly he will not be hired back. This is because Gillis’ cancellation is the closest he ever got to fame.

When the internet cancels the stars, it makes the news and we get upset with them, but this rarely marks the end of their career. The downfall of cancellation is our inability to follow through. In most, non-Gillis cases, the famous person has had time to prove the value of their personality or output before being cancelled.

Whether or not it’s morally right of us, it’s easier for us to forgive people we like than people we don’t know. Even though we may not like what they said, we usually still like them or their work. There isn’t any shame in that. Humans, even the extra-rich, extra-famous ones, are flawed.

Be the first to comment on "Cancel culture is useless"