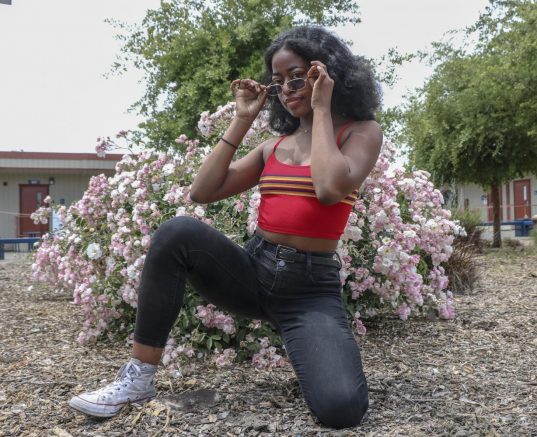 Opinion editor Imani Smith sports the current microglasses trend. It’s important to have your own sense of style without being influenced by what others find fashionable. (Photo illustration by Irene Jacobs)

You know that feeling when you’re flicking through old photos and come across a picture of yourself wearing something that causes you to cringe so hard you feel it in your core?

It happens to everyone — whether you’re sporting a skirt over bootcut jeans or a mullet that would make country singer Billy Ray Cyrus himself clutch his hat in horror, we’re all guilty of it: a widespread susceptibility to trends.

It’s an unavoidable part of life where we wear something that will utterly embarrass our future selves — a part that we expect to eventually grow out of. Lately, however, it’s becoming more and more widespread, and evolved into something akin to an epidemic.

However, now more than ever is when we need to keep a firm hold on our own clothing tastes and preferences without allowing them to be corrupted by herd mentality, as at best they can define who we are.

Fashion almost always reflects the attitude of the time period in which it originates: in the 1920s, shorter dress hemlines reflected women’s abandonment of rigid conformity. Later, in the 1970s, loose-fitting clothes reflected the lightheartedness of the hippie reign. And now, decades later, the late 2010s are the years of the hypebeast: in which materialism and brand flaunting is at its peak and looking your best is given importance above all else.

However, while normally we would expect “looking your best” to mean people put great care in to how they dress, it instead seems to be the opposite: people are throwing on brands thinking that if what they wear is all trending or designer, it must be a good look.

Now more so than ever, we see people are dressing in order to fit into the trends that they are being told are cool, instead of being able to look at the market objectively in order to decide whether they like something or not.

On one hand, there’s absolutely nothing wrong with seeing a trend that you think is cool and wanting to wear it, just as there is nothing wrong with disliking a trend at first and then warming up to it. The problem comes when people decide to hop on the bandwagon, regardless of if they love or loathe the trend.

For example, let’s take the dad shoes trend, one of the biggest offenders in my opinion. Years ago, many of us were made fun of in elementary school for our Champion tennis shoes that were all our parents could afford. Up until recently, the word “dad shoes” itself was still used as a negative connotation and mocked far and wide across the internet.

That is, until Balenciaga (the pioneer of making ugly shoes marketable — who else remembers those platform Crocs?) dropped its fall 2017 menswear collection, debuting its colorful take on chunky dad shoes priced at up to $1,000. Around that time, the brand FILA made its comeback by offering a cheaper alternative, thus allowing people to begin inexplicably buying their products in order to redefine them as cool.

In what seemed like no time at all, the same people who clowned their classmates for wearing dad shoes were now lining up to get their hands on them.

So, it begs the question: Do people actually like the aesthetic design and appeal of the trends they see, or are they just following along with what someone else tells them is cool?

Let’s be real with ourselves for a moment: If there wasn’t a million-dollar label behind that brand tag, would you still buy them?

With logomania now unavoidable in both high fashion and streetwear, it’s clear that companies are aware that all it takes is a tantalizing designer label to make the hypebeasts’ mouths water.

Many creative teams are aware that as long as they slap a popular label on to something it will sell — even if it’s horrendous. Why else would the streetwear brand Supreme decide to release a brick as a product (that eventually sold out)?

And therein lies the issue: as a result of people mindlessly following trends, the distinct styles of the individual are becoming eclipsed.