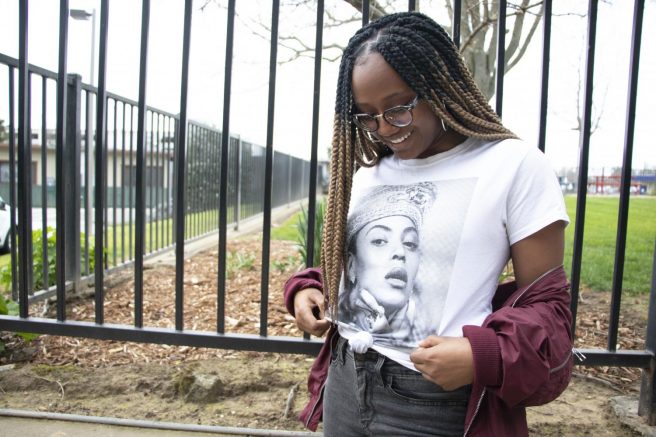 Social Media Editor Alexis Warren wears a Beyonce shirt to honor her as one of the black icons that Warren looks up to during Black History Month on Feb. 25, 2019. (Photo by Ashley Hayes-Stone)

Black History Month takes place during the second month of each year. It is dedicated to honoring and shining light on past and present historical black figures. These are people who have paved the way for African-Americans today because of the bravery they unveiled while breaking down barriers for future generations, and that is why I am choosing to honor them.

The most prominent black figures who have earned their spot as black icons and deserve to be praised are activists Martin Luther King Jr., Rosa Parks, Harriet Tubman and Malcolm X, to name a few.

These people are introduced to us in school at a young age because of the important impact they have had on society, such as King’s “I Have A Dream” speech and even Rosa Parks’ refusal to give up her seat. It is a given that we respect their influence, but this year, I am adding a few modern day black icons to honor to my list.

To begin, I would like to acknowledge the Queen Bey, Beyonce Knowles-Carter.

Beyonce is more than 20 years into her career and still breaking down barriers. Her most recent accomplishment is being named the first black woman in history to headline Coachella, an annual music and arts festival, on April 15, 2018.

She is also the first black female recording artist to flawlessly grace the cover of Vogue, in the 2015 September issue. In fact, when Vogue’s Editor-in-Chief Anna Wintour gave Beyonce control of her most recent 2018 cover, she got the first black photographer in the history of the magazine’s existence to photograph the cover — Tyler Mitchell.

Beyonce makes me proud to be a young black woman and encourages me every day as she uplifts and shines light on other black men and women as well.

Another black icon I am honoring is former NFL quarterback, Colin Kaepernick. In addition to playing for the San Francisco 49ers, Kaepernick is famous for kneeling during the national anthem before his football games in response to the police brutality against blacks, in 2016.

One of my favorite quotes from Kaepernick is, “I am not going to stand up to show pride in a flag for a country that oppresses black people and people of color.”

As of today, Kaepernick is a free agent but many celebrities, activists and fans stand by his side in support of his decision to take a stand for minorities. Recently, Kaepernick settled a legal battle with the NFL that settles claims that team owners conspired to blacklist them for their activism, according to npr.org. He is rumored to have won $60 million to $80 million

Shahidi is a Black and Iranian 19-year-old actress and activist. She also is the star of hit show “Grown-ish.” Shahidi is on my list simply because of her ambition to get young adults to vote. She founded Eighteen x 18 which is “a platform designed to uplift our generation of voters to take action into our own hands and discover the issues that impact us through our own stories and experiences,” according to information posted on its site.

Last but not least, Martin. Martin is named the youngest black executive producer in history with the movie she’s starring in, “Little,” hitting theaters April 12. I applaud her for taking on such a strong lead role and I can only imagine how bright her future will be.

These modern day black icons have caught my eye because of their ambitious ways to break down walls and barriers and make black history evolve more and more each day. They make me proud of my color, give me hope for my future and makes me want to work even harder towards my dream career.

Beavers lose in a close game by just three points