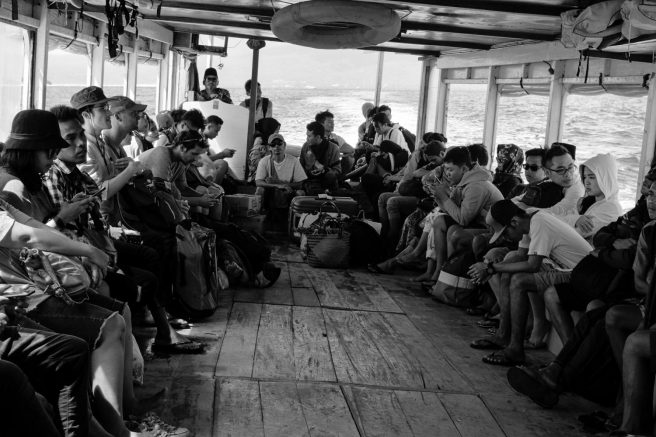 This photograph is used to question the narrative possibility in photography. Depicted in the photo are a group of people, in a barge, on a body of water, but is there really a narrative? (Photo by Patrick Hyun Wilson)

The cabin is dark; rocking on the sunbeat waves, people wait for shore.

The haiku above encapsulates the entirety of the photograph that accompanies this essay. The photograph creates more questions than it answers. Who are they? Where are they going? What lies ahead for them?

These questions can’t be answered by looking at the photograph. There is nothing in the photo that gives a viewer any clue as to the story of the people or why they are on the boat. This is an inherent truth to all photographs, despite the idiom ‘A picture is worth a thousand words,’ photographs have no narrative possibility whatsoever.

In order to begin to question the narrative capability of a photograph, one must consider narrative as a concept in itself. The hero’s journey consists of a series of events which change the character of the story. Consider Jack and The Beanstalk.

Each action logically follows the action before it, leading to the conclusion that Jack lives happily ever after. Jack left his familiar world as a poor dairy farmer and returned a rich giant-killer. The essence of the story is the change in his character.

Photographs, on the other hand, represent a flattened moment in time, showing from a single angle, what something looked like at the moment of capture. If the photograph contains meaning deeper than its surface, then it would be an external meaning from the context of where and when the photo was taken.

Photographers have debated the narrative characteristics of photography for decades. It was articulated best by legendary photographer Garry Winogrand who said, “A still photograph is the illusion of a literal description of how a camera saw a piece of time and space.”

Since Winogrand’s declaration, photographers like Joel Meyerowitz and Teju Cole have debated the topic heavily through lectures and essays. One such essay, written by Cole in the New York Times entitled “What Does It Mean To Look At This?” discusses a photograph by Susan Meiselas captioned, “Neighbors watch as dead bodies are burned in the streets of Estelí, 1979.”

“We know something awful has happened. But finding out exact details, through the photograph alone, is more difficult. Who these sufferers are, why they suffer, who or what caused the suffering and what ought to be done about it,” Cole wrote.

A look at a photograph will tell you that something is happening or has happened, but to understand the full narrative requires looking outside of the edges of photograph.

Photographs represent singular and distinct moments in time, divorced entirely from the context of the moments that preceded it and the moments that will follow it. The photograph literally depicts the light at a particular moment as it appears to a camera.

Consider the photograph that appears in this piece. Examining the details of the photograph, one sees that it seems to describe a group of people sitting on a boat. The floorboards look crooked and in conjunction with the fact that one end of the boat is higher than the other- reinforced by the horizon in the background- it appears to be a turbulent boat ride. On the top edge of the frame hangs a life preserver, hovering above the passengers. The inside of the boat is dark and composed of sharp edges and high contrast.

If I were to tell you the people in the photo are college students on their way to an unexplored island of Hawaii, you’d have no way to know for sure whether that’s truly the case just by looking at the photograph.

There is no inherent quality that tells you the truth of its narrative. It is a depiction of a singular event, taking place in the context of a larger narrative of which the single photo is incapable of depicting. The truth of the photograph is as innocuous as it gets; a group of tourists take a ferry from Lombok island in Indonesia to Gili Trawangan island. The photograph alone is incapable of telling the viewer any of those details and so thus there is no narrative element inherent to this photograph.

The limit of photography, however, is also its strength. Taking a strong photograph is in a lot of ways closely related to writing a strong haiku. A powerful haiku uses imagery, conjured through text, to create beautiful meditations on the nature of life in much the same way that a photograph can do so using literal imagery. In the same way a photograph is constrained to a single moment, a haiku is constrained to a few syllables of text. While narrative can be explored more in a haiku, compared to a photograph, both are extremely limited in their narrative possibility.

The narrative of a haiku or photograph depends on the assumptions a person reading/viewing makes based on the given descriptions. A thing that is described to be dark and made of jagged edges and sharp lines, has a different inherent quality than something that is described as bright and made of curved lines. These descriptions contribute to the imagined narrative a person may create when reading a haiku or looking at a photograph.

Poetry in photography is its strongest attribute. The photograph is nothing but a collection of information contained within the edges of its frame. By selecting what items to represent in a photograph- and how to represent those items- the photographer implores a viewer to find a connection between them.

A photographer can depict information about what a thing or event looks like to a camera. While that may not seem like much, it is a powerful tool to depict reality in an extremely accurate if limited way. The job of the photographer-documentarian is to place objects within their frame in a way that is responsible to the truth of how those items appear in reality.