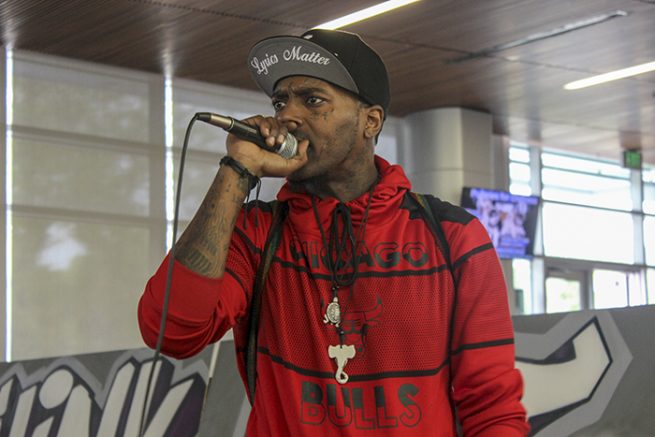 Aurellius the Siant performs at American River College's artivism event on April 18, 2018. ARC's UNITE program invited Aurellius to lecture on the importance of words on April 17 and to perform at their artivism event the next day. (Photo by Jennah Booth)

In the wake of unrest and injustice, people grasp for ways to communicate their frustration. Discontent within society can ignite campaigns for change, some violent, some not. The frustrations of our nation have hit home in recent events and have sparked some of these campaigns in Sacramento.

As activists march in protest, block freeways and Sacramento Kings’ games in ‘peaceful’ protests, Sacramento residents are left questioning the best way to create change. Is there a right way? How can we communicate our frustration, question our society and enact change within it?

While there may not be one true answer, art has always held loving hands with activism and may be the purest form of peaceful protest.

As a home to many activists and artists, American River College is working to create an environment that celebrates art as a tool for change through Artivism events and recognition of student art.

Art is a universal language. Whether it’s music, performance or visual; art has a way of connecting to everyone in some way and is a powerful tool for communication and expression.

Art asks people to examine themselves as well as the world around them. It asks questions, conveys pain, illustrates history and can impact the future.

In literature satire has been used as a tool to examine societal norms for centuries.

Music in the 1960’s reflected the unrest of the Vietnam War and the Civil Rights Movement.

Anonymous graffiti artist Banksy has been the non-existent face of mainstream artivism since the 1990s.

Art has the ability to bring forward issues in a non-violent and non-confrontational way and, because of its ability to connect, leave a powerful impact on its viewers.

ARC’s Universal Engaging Inclusive Transformative Education (UNITE) program celebrated this impact on April 17 and 18 with its first ever Artivism Celebration.

Illinois based rapper and activist Aurellius the Saint lectured the first day and performed the second day of the event.

With a strong history of activism, Aurellius advocates for the importance of words and the power that lyrics can have on an individual and society as a whole.

Aurellius has worked with an array of organizations, including Black Lives Matter, WEAVE and We the People. His work with We the People gave him the opportunity to teach the fundamentals of poetry to children in Ferguson, Missouri.

“When I got to teach and mentor children, I cried every time I left,” he said. “Cried. All these tattoos, looking into these innocent eyes, knowing they looking at me like, ‘Dang.’ Because they know I represent self expression.”

Aurellius saw the power of artivism firsthand, in a community in turmoil after the fatal shooting of Michael Brown by white police officer Darren Wilson in 2014.

“It was a terrible tragedy, out in Ferguson … It took something like this, it took artivists, it took consciousness, it took passion. These are the words that we need to be using a lot more,” he said. “When we were in Ferguson, you know who created that movement? It was conscious artists. It was artivism … Support that substance. Music has a lot to do with the revolutionary. A lot.”

ARC has its own examples of artivism, which are proudly displayed in the James Kaneko Gallery on campus.

Renee Marie is a retired Army veteran and an art student at ARC. On April 25, Marie’s mixed media piece, “In Free Will We Trust,” won first place at the ARC Annual Student Exhibition.

Marie’s work brings into question many issues surrounding gun laws and violence in society today. Her other piece on display, “The Painted Lady,” addresses today’s beauty standards and pressures on women.

Marie’s pieces are textbook examples of how art can bring forward ideas and frustrations in a nonviolent way.

“I think art is a way of almost crying out. It’s a nonviolent call to action,” Marie said. “It’s asking people to consider empathy. I feel like almost all art is universal.”

Artivism uses that universal connection to instill a message in people. It asks viewers to turn their perspective inward and find something within themselves.

“Once you know the artist background and you know the viewers’ background, you find out that there’s something that connects you,” Marie said. “In all of this work, we’re called to look deeper or ask questions because we find a bit of ourselves in the story. We find forgiveness, we find meaning, we find the political angst.”

Marie said she allows her work to speak for itself. She observes the objects she finds and searches for the message within them, then creates her pieces around that message.

“I like it when artists use their time and their talent to create that visual stage where we all can be invited in and consider what is being said. And if that brings someone to a state of apology or curiosity that, for me, is what art is about,” she said.

In times of unrest, people have always taken different paths in order to express injustice and frustration. While there is debate over how aggressive that expression should be in order to enact change, there is no debate over a truer form of expression.

Art in activism is often underestimated but always necessary and the purest form of peaceful protest.

Be the first to comment on "Artivism: The true peaceful protest"