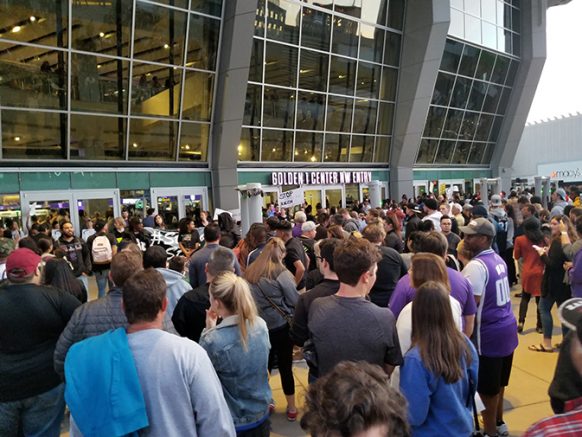 Sacramento Kings fans were prevented from entering the Golden 1 Center after protestors blocked all openings on March 27, 2018. This was the second such protest in the last week after the fatal shooting of Stephon Clark. (Photo by Hannah Yates)

While the protest that occurred in front of the Golden 1 Center during the Sacramento Kings vs. Atlanta Hawks game on March 22 may have been inconvenient, it got the point and message across. Another young black man was needlessly gunned down and we need to have a discussion about it — and see change.

This protest made most people recognize the issue and understand why it was happening.

Stephon Clark should not have lost his life. Should he have been questioned? Yes. Arrested? Probably. Shot 20 times for holding a phone in his hand? Absolutely not. The city’s response to the incident didn’t sit well with some people, so they took the the streets to show their displeasure.

The Kings organization took steps to show solidarity with the protesters after the first arena shutdown. Team owner Vivek Ranadivé came onto the court following the Hawks game to say that the issue was “bigger than basketball.” Kings player Garrett Temple was vocal about the issue. The players stepped up and championed the idea of wearing T-shirts about accountability with Stephon Clark’s name printed on them. They made a video with members of the Boston Celtics, showing they were committed to the cause and willing to promote the issue.

The Sacramento Kings organization did everything right. And still lost.

While the protestors stayed away from the Boston Celtics game on Sunday, they returned with a vengeance for Tuesday night’s game against the Dallas Mavericks, once again preventing thousands of ticketed fans from entering the arena, and forcing the team to issue refunds for the second time in five days.

They chanted as they blocked the arena; “No justice, no peace, no racist police” and “It’s just a game!” By halftime, the Kings told everybody that the arena would remain closed and wished anybody outside a safe trip home.

The protesters left the arena that night with smiles on their faces having denied thousands of people their right to watch a game they paid for, but what have they accomplished?

While their cause may be just and many people, including myself, sympathize with them and the Clark family, this second show of protest towards an organization that has nothing to do with the problem diminishes their message.

It makes the protesters look hypocritical for not protesting Sunday’s game, but coming to Tuesday’s game. One protester said, “It doesn’t matter when we show up.” If demonstrators were going to protest one game, why not all of them? It lulled people into a false sense of security in travelling to the game thinking there would be no problems getting in or not having to fear for their safety.

These protests are beginning to raise questions, and not necessarily the ones they were intending: Why are you protesting the organization that is standing with the cause? The Kings took several steps to show they were onboard with the issue, and this is how the franchise was repaid.

If the people who support you aren’t spared from your wrath, then who is? Are the protesters really looking for change, or are they just looking for a chance to get some publicity and seize the moment? Why not protest at a place that can make change, like City Hall or the Sacramento Police Department? Surely they can do more for this issue than a basketball team could.

What they have succeeded in is alienating a member of their fellow race. As an African-American man, I was drawn to the initial protest and while I felt like a Kings game was not the proper forum for this, I knew it was somewhat necessary.

However, when I am losing money and wasting my gas and my time to come and watch my beloved Kings, I have a right to feel angry. Not only because I lost out on seeing the game, but because it felt like a protest that was unnecessary. A protest that had already targeted and impacted these type of individuals — especially individuals who may have agreed with your cause.

I also have a right to feel angry that some of those protesters told me I’m not “black enough” for hanging out with my friends who happen to be white. This kind of stigma will not lead to change, and will only lead more people to question their support for the cause.

Investigations and questions absolutely need to be asked about the Stephon Clark shooting. We can all agree on that. But protesting and obstructing the organization that supports you is not the right way to rally support. In fact, all it did was hurt whatever support that had been built up.

1 Comment on "Protesting another Kings game has only hurt support"