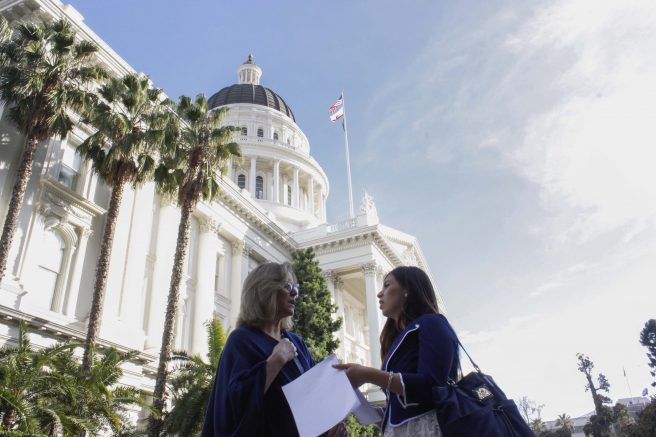 After an almost four-day government shutdown, Democrats and Republicans voted on Jan. 22 to resume operations until Feb. 8 in hopes of keeping the approximately 700,000 “Dreamers” in the states.

Democrats and Republicans reconvened Feb. 8, however, and still couldn’t come to a decision on how to keep Dreamers in the U.S. permanently.  DACA is set to be terminated March 5 and there is no solution in sight, so Republicans and Democrats need to act fast.

Once that March 5 deadline hits, the almost 700,000 Dreamers will gradually start losing their work permits and deportation protection.

Dreamers are individuals who were brought to the U.S. illegally as children and given temporary citizenship. The Dream Act was passed in 2012 by the Obama administration and requires Dreamers to renew their permit which lasts two to three years.

Despite misconceptions, Dreamers are young people trying to get and education and aren’t people who want’ to take from the government/ U.S. citizens. As Americans we need to do a better job of looking at dreamers as people and not thieves.

The uneasiness and fear that comes with being undocumented is all too real for Dreamers all across the country.

Having this shutdown happen, and the government not being able to agree on how they should— or even if they should grant citizenship for dreamers—is adding insult to injury for these young people.

American River College alumni Jazmin Sanchez is a Dreamer who says she sees this disconnect between undocumented individuals and the rest of the country first-hand. Sanchez says she has been a victim of this lack of understanding between documented and undocumented people throughout her educational career.

“They don’t understand and it’s exactly that, a lack of understanding and a lack of empathy which I think every human being should have,” Sanchez said.

The most obvious reason behind politicians not being able to come to an agreement on how to keep dreamers in this country is a lack of empathy. This lack of empathy is in abundance all throughout Washington and can be seen in every corner of the United States.

Humanizing dreamers and not labeling them as a drain on resources or criminals is the first critical step in creating a plan for the permanent residency of these young people.

“They’re threatened by people like me, by students … it’s honestly just hate; It’s their own hate and their own bias getting in the way of something that can help this economy grow,” Sanchez said.

Former Sacramento City College student Karen Vargas says she can also attest to feeling discrimination and hatred as a dreamer.

“The people that have problems with dreamers are the same people that say that immigrants came here to ‘steal their jobs,” Vargas said.

Dreamers in general want their own version of the “American dream” and many work hard to achieve that by going to college, working, etc. Vargas is working toward that herself.

“They think we want to take more than what they have, when all we want is to be equal and to have the same opportunity as someone who was born here,” Vargas said.

As Americans, we have to check the privilege we have of our citizenship and stop labeling dreamers as less than or not American.

We need to include dreamers by creating a space for them to feel safe and to share their stories. There needs to be conversations had so people who’ve never had to question their place in this country a day in their life can see what it’s like to have to live in fear everyday.

Politicians and citizens alike need to evaluate the way we look at and treat people who are different from ourselves, and the issue of DACA has brought this to light like no other. Protecting DACA has brought together people from all walks of life in hopes of doing the right thing by dreamers.

Despite the uncertainty of their future, the strength of the 700,000 plus dreamers won’t be diminished and neither will the support from the people who rally behind them.