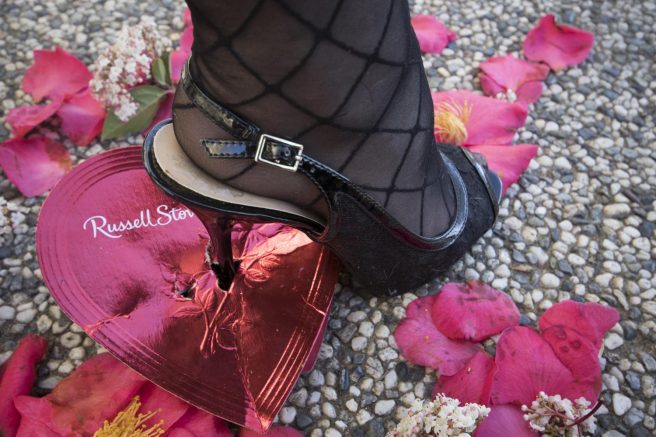 As Valentine’s Day quickly approaches, the public is bombarded with eager merchants desperate to sell their wares.

As consumers, we are blinded by the red and pink propaganda that assaults our eyes at every turn.

Retail stores from Frederick’s of Hollywood to Walmart, are touting the best deals on lingerie for that ‘big night’.

Fashion blogs across the internet are writing articles on what to wear for that ‘special’  Valentine’s Day date.What they should be writing about instead is how to stop the holiday’s incessant degradation of women.

The media has set the precedent for how we should look, act and dress which ultimately results in the objectification and sexualization of women everywhere. And that’s not okay.

All of this for a holiday whose true origin and purpose was lost a long-time ago.

“There is different aspect in which women are sexualized on Valentines Day,” said Elena DeNecochea, president of American River College’s Feminists United Club.

According to DeNecochea, even the moniker ‘V-Day’ itself is hinting at the female anatomy.

“It does have a lot to do with the commercials you see on television. Like lingerie commercials for example; if you notice, it’s always women who have the same body figure so it’s not really body-positive,” DeNecochea said.

The impact of being objectified and sexualized due to the variety of media outlets weighs heavy on the mind of women in the United States.

According to the American Psychological Association, being exposed to what the media dictates as the preferred body type can lead to increase feelings of body shame and appearance anxiety which often leads to eating disorders such as an anorexia and bulimia.

Another study from the American Psychological Association, shows that approximately 91 percent of women are dissatisfied with their bodies, and resort to dieting to achieve their ideal body shape.

The media presses such propaganda in unconventional ways such as with movies such as “50 Shades Freed” and its predecessors, that promote relations based solely (at least in the beginning) on sex.

It is movies like this that lead young women to believe that their body may be imperfect, or that it is their job, their responsibility, to perform sexual acts to please men.

There are constant pressures placed on women to fit into a mold of what they have been programed to consider the ‘perfect body’ and on Valentine’s Day that can also mean contorting themselves into complex contraptions of straps and lace because that’s what they have been told men like.

Based on 2017 studies by J. Walter Thompson New York Agency and The Geena Davis Institute on Gender in Media, women in advertisements are more likely to be shown in revealing clothing five times more than men.

The fundamental idea of the ideal Valentines Day date is flawed. Both parties dress to impress, the woman is pressured to purchase the skimpiest most revealing lingerie the store has to offer, and then the man is expected to fork out money on an expensive dinner. But that’s not where it ends.

Because after that fancy dinner he paid for, it’s heavily implied by the media that the night will end with sex. Which brings up a larger issue: consent can be ignored on Valentine’s Day.

With the increase in awareness regarding sexual misconduct and social actions such as the MeToo movement and the Women’s March, it is now more important than ever that emphasis should be placed on consent for both parties.

“Sometimes we think someone is consenting just by like the way they look, or because it’s Valentine’s day and you’ve been dating for awhile,” DeNecochea said. “But you really have to get consent verbally.”

DeNecochea went on to say that commercial industry also focuses on herterosexual relationships, excluding those who are a part of marginalized communities.

“It’s usually heterosexual-oriented commercials. So that doesn’t include LGBTQ or any of their rights,” DeNecochea said.

Because Valentine’s Day is the holiday of “love,” women or anyone for that matter should channeling that love into themselves. Nowhere does it say the only relationships that can be celebrated are sexual.

Valentine’s Day doesn’t have to be a day of dubious consent and sexual implications. If you want to buy flowers because you love your mom, do that. If you want to give a box of chocolates to your best friend, do that.

And most importantly have an open communication with your partner. Not all women want to have sex on Valentine’s Day, and that’s OK.

Make the day fun, plan a day at home with your significant other, eating pizza or baking a cake. Or go out and have that fancy dinner, but if you do make sure it’s because you want to and not because society told you that you should.

“Valentine’s Day really can be a pro-feminist day if we choose to make it that way,” DeNecochea said.

Women shouldn’t feel that they have to fit into a certain mold in order to be loved or desirable.

“We should be teaching women and young girls to be empowered so that they realize that they don’t need to buy into what are being fed,” Hermosillo said.