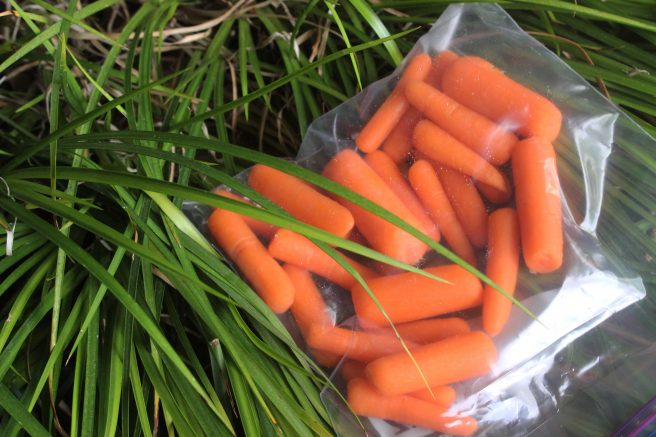 Eating healthy doesn't have to be expensive. Carrots are an easy snack that are cheap and low-calorie. (Photo by T.J Martinez)

Eating healthy doesn’t have to be expensive. In fact, it can be accomplished fairly easily even if you are on a budget.

What is a healthy diet? According ARC nutrition professor Jana Gonsalves, a healthy diet consists of fruits, vegetables, and whole grains for carbohydrates. For protein, the diet emphasizes lean meats, poultry, fish, eggs, legumes, and nuts.

The key element here in moderation is portion control. Gonsalves said that in the last 20 years food portions have “exploded.” An 8 ounce soda is now a 20 ounce bottle for example.

A healthy diet limits such things like added sugar, trans-fats, sodium, and saturated fat. It’s important to note that these should be limited not excluded, except trans-fats. Trans-fats have been linked a various amount of health issues that can be avoided by simply not consuming them.

One way to keep a healthy diet is to stay away from liquid calories. That doesn’t mean you can’t have them, just in moderation. Soda and Starbucks drinks can really add to your daily total amount of calories. For example according to Starbucks’ nutritional information, a Java Chip Frappuccino is 600 calories. Meanwhile, a Big Mac from McDonalds is 563 calories.

According to Gonsalves, ways to stick to your diet include planning your meals, sticking to your grocery list, cooking larger portions at home so you have easy meals for the week, and buying whole foods.

Whole foods can be found by staying away from the aisles in the grocery store and sticking to the perimeter. Gonsalves said that frozen fruits and vegetables are acceptable though.

One of the ways to save money while shopping for your diet is to avoid buying packaged foods. According to Myplate (Myplate.gov), convenience foods often cost more than preparing and eating these foods at home. This includes foods like frozen dinners, pre-cut fruits, vegetables, and take-out meals.

Both Myplate, and Gonsalves recommend buying produce that is in season as it’s usually cheaper. By going to farmer’s markets you are not only directly supporting local farmers, but you are also getting good deals on fresh produce.

Gonsalves recommended trying to go towards the end and negotiate with the farmer to see if you can get a better deal, as some farmers won’t want to take all of their produce home.

Some examples of foods that are low cost and very nutritious, are eggs, beans, sweet potatoes, apples, bananas, oatmeal, peanuts, and lean meats like chicken.

According to the USDA, a dozen large eggs in California is just $1.36, And according to Gonsalves a pound of dry beans is just $1.79, which is 12 servings of beans opposed to the three found in canned beans priced at $1.69.

Eating healthy on a budget is not hard. By avoiding pricey sugary drinks from the likes of Starbucks, avoiding spending money on high-priced frozen meals, having a healthy diet, and a happy wallet can be achieved.

Be the first to comment on "Eating healthy on a budget"