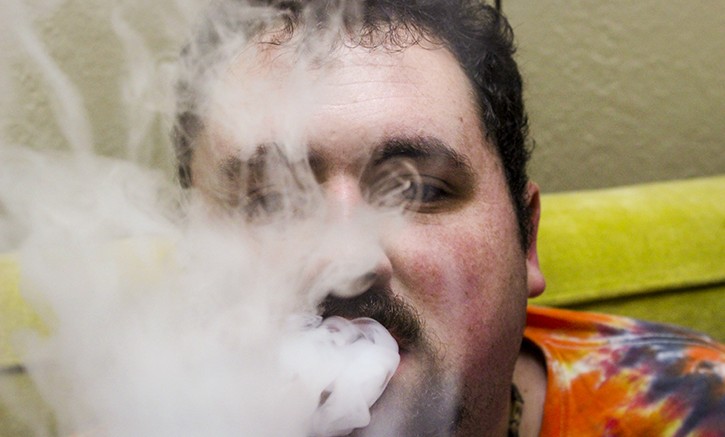 An American River College student takes a hit from his vaporizer. Vaping, along with smoking, will be banned at ARC starting on Jan. 1. (Photo by Jordan Schauberger)

American River College is scheduled to become a smoke, tobacco and vapor-free campus on Jan. 1, 2016, but many at ARC, including fifth semester student Hunter Anderson, are outraged by the inclusion of vaping in the ban of on-campus smoking.

“I don’t see why something that is not directly harmful to a bystander, causes no bad or remaining smell, or any intrusion into another person’s life would be banned to try to make the college look ‘nicer’ or ‘more attractive,’ ”said Anderson.

Vaping and smoking are clearly different enough that vaping shouldn’t be banned along with smoking next semester, or at least a new survey should differentiate between them.

In a press release earlier this year, ARC President Thomas Greene said the ban on smoking is geared towards creating an atmosphere of “mutual respect, wellness and sustainability” on campus.

“This decision more closely aligns with our institutional values,” said Greene. “ARC is committed to supporting a culture of health and wellness for all its students, faculty, staff and visitors. Key to that commitment is establishing an environment free of all tobacco use and exposure to secondhand smoke.”

For those who are against the vaping ban, it would be easy to see the flaws in Greene’s statement.  Many vapor products don’t contain tobacco and secondhand smoke is almost nonexistent.

The majority of research related to vaping released thus far has indicated that the health ramifications of inhaling the vapor from e-cigarettes are miniscule in comparison to those of traditional cigarettes.

In 2013, more than 50 expert scientists signed and sent a letter to the World Health Organization (WHO) urging them not to jeopardize the success of e-cigarettes and claimed that the vapor product is “among the most significant health innovations of the 21st century — perhaps saving hundreds of millions of lives.”

Since the popularization of vapor products in the early part of this decade, however, more and more negative reports have come out against the claim that e-cigarettes are a healthy alternative to smoking.

The newest and most popular trend for anti-vaping is the production of formaldehyde at high voltage vaporizing. In 2011, the US National Toxicology Program described formaldehyde as “known to be a human carcinogen” and it is a significant consideration for human health.

However, EcigaretteResearch.com claims that in commerical vaping (3.3 volts) no formaldehyde is produced.

One of the biggest downfalls to vaping is that there isn’t any regulation for the liquid by federal authorities, so the composition of e-liquid varies from company to company.

Traditionally, e-liquids are made up of nicotine, flavoring and a base, with the base differing heavily between brands.

Among substances used to create a base are propylene glycol, which is used in theatrical smoke, and diacetyl, a chemical known to give butter its “buttery” taste.

Propylene glycol is known to cause irritation to the eyes and respiratory infections and inhalation of diacetyl can cause scarring in the lungs over a long period of time.

According to a study published last year in the Nicotine & Tobacco Research Journal, about a third of the people who quit e-cigarettes and returned to smoking did so because they were concerned about the health ramifications of vaping.

However, there still seems to be a large population of smokers who use vaping to as a crutch while trying to quit smoking.

According to a study published by the journal Addiction in 2014, smokers who attempted to quit smoking without professional help were 60 percent more like to succeed with the help of vaporizers with 20 percent of those using the aid of vaporizers completely stop using traditional cigarettes.

Regardless of which side of the argument is being looked at, vaping has yet to have the long life that traditional cigarettes have in society and has, therefore, not has not had the same long-term studies and any definite conclusion about the product can be considered faulty.

Outside of the scientific negatives and positives of vaping, there is a strong case to be held on the claim that the survey taken last semester, that resulted in support for a smoking ban, didn’t properly represent the student body.

Out of the 30,000 plus students who attend ARC, only 1,687 students actually responded to the survey.

Hannah Luz, a student at ARC last semester, felt that many students who may have voted differently than what the results show were not aware of the survey.

“I thought it was vague,” said Luz. “People don’t usually equate smoking with vaping when you say smoke free and a lot of people I talk to didn’t even know that it was being voted on.”
If the school administration took the time to go out and talk to students they would almost certainly be inclined to submit the survey to a re-vote and, at the very least, recategorize the vote to provide a specific distinction between vaping and smoking.

2 Comments on "Opinion: Vaping shouldn’t be a part of the smoking ban"