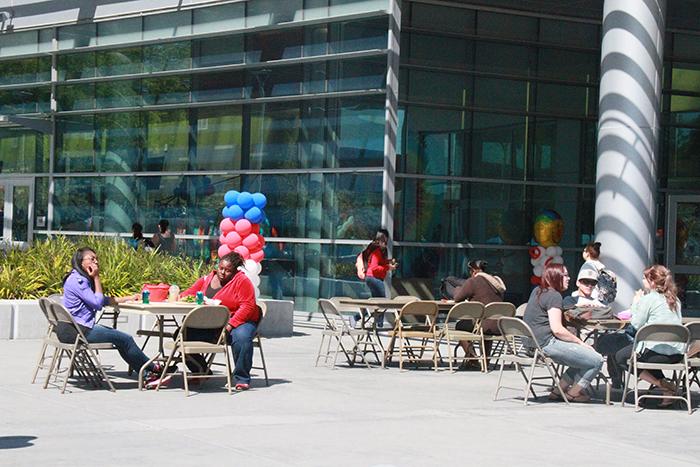 In 2014, the Black Friday shopping numbers shamed the number of people who voted in the midterm elections.

If saving $400 on TV is important, saving a country billions is also important, too.

We have a student body government here, but few, really few, students actually vote when the Associated Student Body elections take place. In last Fall’s election, 153 votes were cast in the presidential election. That is down from Spring 2014, when 457 students voted.

That’s out of 28,175 students enrolled in American River College.

That’s a little more than half a percent.

What’s worse, sometimes we don’t vote and lie about it. According to a University of Chicago study, peer pressure makes us lie about whether we voted or not because we want to be liked.

Of course, just wondering why there are so few voters doesn’t help much.

National voter turnout isn’t the best it could be. “Voter turnout in the United States,” according to the Center For Voting and Democracy, “fluctuates in national elections, but has never risen to levels of most other well-established democracies.”

When it comes to presidential and midterm elections, a huge number of us, 40 percent and 60 percent respectively, just don’t vote.

According to the CVD, “In countries with compulsory voting, like Australia, Belgium, and Chile, voter turnout hovered near 90 percent in the 2000s.”

It’s our responsibility to vote. And it’s in the students’ interests to vote. My Ramen Noodle eating, coffee gulping, all-nighter pulling fellow Beaver: it’s your responsibility to make your voice heard so that your representative is representing your perspective. What will he or she say when an issue is discussed?

It’s not just the students’ responsibility, though.

Los Rios District Student Trustee Omba Kipuke contends that setting an example that spotlights the community of the community college will affect responsibility in students, which includes voting.

If you are running, you share the responsibility of getting people to vote.

Like a good teacher who ignites passion in a student and the student learns, the candidate ignites the interest in the voters. People learn best by example.

The person running should campaign and do all he or she can to get the word out about who he or she is, what the platform is and what the plans are, what he or she will do and did.

So, candidate, bust open that social media page because that’s where your students are. And because if you are not using mobile web and or social media, you, my friend, need to catch up: Obama and Romney spent money on digital campaigning and so should you. Online is where your voters are.

Besides students taking responsibility, and candidates setting an example and reaching out to where students are and to student where they are at (note, those two are different things), there are things administration can do, too.

A study published in the Journal of Higher Education Outreach and Engagement suggests that while there are limited results to dorm door-to-door, change can come about if more students, faculty, administration and community leaders get involved.

One thing the study suggests is “widely disseminating election information via website, social media, e-mail, and text,” which is what administration is already doing.

Another is “developing a corps of student educators and community leaders to deliver in-class election presentations,” (which don’t have to take up the whole class, I might add, just a few minutes, as with teacher evaluation surveys).

But democracy is a shared responsibility and we ought to each pitch in, however we can, to make change happen, and to set example for other colleges and universities.

Then maybe we can have 99 percent of students voting, in stead of just one percent.

1 Comment on "Opinion: What we can all do to increase voter turnout"