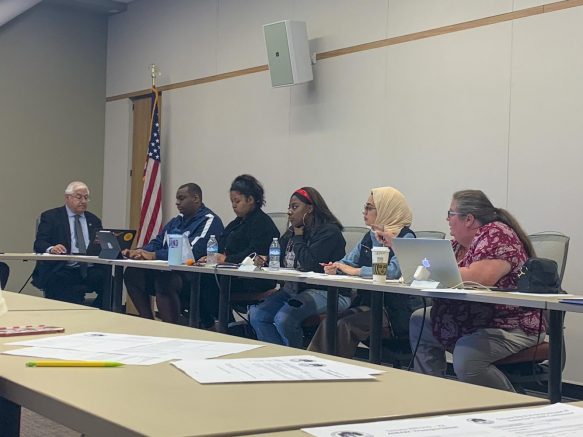 Senator Alexxandria Paige walked out of the ASB meeting after citing insufficient training, at American River College on Nov. 1, 2019. (Photo by Jack Harris)

Senator Alexxandria Paige walked out after citing insufficient education on how to appropriately write bills and other procedures, such as submitting an item to be put on the agenda. Items can only be acted on by ASB if they appear on the agenda for that meeting.

“Will we be getting more training on this? Because we don’t know a lot of this language that we need to know,” Paige said. “I don’t even have the skills to send an agenda item request.”

After the meeting Senator Laurie Jones said that the senate does need more training.

“As [Paige] pointed out, we haven’t had a lot of training,” Jones said. “The parliamentary procedure will hopefully do a workshop for us.”

Senate President Aesha Abduljabbar began the meeting by acknowledging that ASB missed the deadline to sign up for the Circle of Change Leadership Conference in Los Angeles. This comes after ASB members granted themselves up to $15,000 to fund the trip, according to Abduljabbar.

ASB also amended Bill F19-07, the Plastic Display Holder Bill, to now allocate $350 towards the purchase of plastic display holders instead of the previously designated $250 after they incurred more fees from the manufacturer. The holders will be placed on ARC cafeteria tables and be used to advertise campus news and events.

Next, ASB brought forth an amendment for F19-06, the Food for Slate Conference Bill. They added the words “and supplies” after the word “food” in order to use the bill for the purchase of ARC keychains, t-shirts and more for the raffle at the Slate conference. The amendment was approved after some clarification of correct procedures.

ASB also passed Bill F19-XX, which allocates $500 to reimburse senate members and advisors for travel expenses to senate-related activities, as long as they announce the travel in advance.