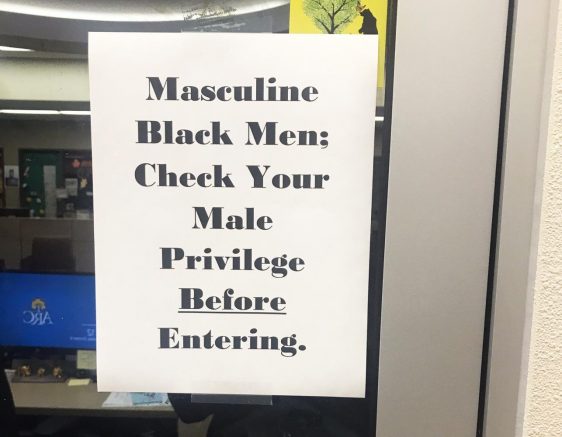 A flyer ignited a campus-wide conversation after this photo, taken by an unknown person, was shared in an American River College faculty email thread, as well as on Reddit and Twitter.

A flyer posted outside of the UNITE office in the HUB ignited controversy among both staff and students, and prompted a formal apology from American River College President Thomas Greene.

The flyer which read, “Masculine black men; check your male privilege before entering,” was posted without explanation by paid UNITE interns after internal dialogues about misogyny, according to Joshua Moon Johnson, Dean of Student Services, Equity Programs and Pathways.

“The student interns were having conversations around women of color … and the experiences they have within the black community,” Moon Johnson said in an interview with the Current. “From that dialogue, it became an 8 and a half by 11 word documented printed sign that was placed on the glass door in the UNITE office.”

The flyer was removed on Oct. 8, about a week after it was posted, when a faculty email thread brought attention to the poster’s wording, with many faculty members pointing out that the language seemed discriminatory towards black men.

Greene addressed the situation in a faculty email on Oct. 9.

“The sign was part of the work Black student HUB leaders were doing in exploring issues related to sexism and misogyny,” he wrote. “[T]he sign was posted in a way that individuals not involved in this dialogue saw it, and became concerned and upset about the language. The sign did not provide the necessary context or background.”

Although they were asked for clarification, staff members within UNITE and the Equity Programs initially refused to explain the exact context of the poster to their colleagues in the faculty email thread, saying it would instigate misinformation.

In his faculty email response, UNITE Faculty Coordinator Rod Agbunag said he would be willing to explain the context to those who wished to reach out to him individually.

Agbunag has not responded to multiple requests for comment from the Current.

Satya Chima, equity supervisor for ARC’s Equity Programs & Pathways program, also did not clarify the context of the poster in her email response to faculty, but instead said the Equity Program staff fully supported the posting of the sign.

“The situation which led to this sign being put up, by both Black men and women UNITE interns, was fully supported and continues to be fully supported by Equity Programs staff and faculty coordinators,” she wrote. “Please know that we are willing to engage in a dialogue about this with you individually, rather than on a public forum which often results in much more misunderstanding than clarity.”

Chima also did not respond to the Current’s request for an interview.

Moon Johnson said that while he understands the mentality that prompted the initial faculty email and he agreed that the impact of the poster needed to be addressed, he said he also believes the issue with the poster could have been handled better with an in-person conversation rather than via a faculty email thread.

“Our typical approach as Equity programs … is, when someone does something that’s micro-aggressive … hurtful, or offensive to you, the best approach typically is to inquire, ask questions, assume good intentions and approach it with humility,” he said. “Typically that’s done best face-to-face. That was not done in this situation.”

With no official explanation as to the context of the sign, staff, students and commenters on a public Reddit thread about the flyer were left to speculate, many noting that the sign seemed to generalize and single out an entire group of people. Some commenters said the flyer was in response to an internal incident within UNITE, although they didn’t provide any evidence to support the claim, nor was it clear if the commenters had any actual internal knowledge of the situation.

“The sign was in response to an incident that happened weeks before and the student that works within the center decided to post this on the door,” one anonymous Reddit commenter wrote. “Thing is the person who took this photo knew what the sign was referring to but still sent the photo to staff etc.”

Moon Johnson did not directly confirm or deny the speculation that a specific incident prompted the flyer.

“I think a challenge with saying that this poster is in response to one woman’s isolated experiences is to say that sexism and misogyny only happened one time,” he said. “In UNITE’s perspective, we don’t address individual specific experiences. We’re looking societally and institutionally and when a sign is put up like that, it’s because sexism and misogyny is rampant everywhere.”

Joshua Harris, one of the UNITE interns who was part of the dialogue that prompted the flyer, said he wanted to clarify that the flyer’s intention was not to single out a specific person, but instead call out a system of oppression.

“[O]ur job is to protect and open up a safe space for all of the students here on campus, especially marginalized students and students of color,” he said. “I don’t want the impression to be that we would ever use our position as student interns to … try and drag somebody else’s character down. That’s not what we stand for.”

On Oct. 10, UNITE held a closed door College Dialogue on Masculinity & Communities of Color addressing the poster; the meeting was open to both students and faculty, but was not open to the media.

According to Greene’s initial email, those who wished for clarification regarding the context of the sign could attend the UNITE dialogue, or reach out to Moon Johnson who facilitated the event.

“I think that meeting definitely had a lot of emotions and a lot of people talked about a hurt and anger, specifically around racism and specifically around anti-black racism,” he said. “Some of the conversation did revolve around experiences here at American River College, but the themes that people were bringing up are true across society.”

Since the UNITE meeting, no other explanation for the poster has been made publicly by the school to students or staff who could not attend the meeting, but Greene issued a formal apology on behalf of the college in an email sent to students on Oct. 11.

“To all of you in the ARC community who do not feel welcomed and included, particularly in our African American community, please know that I care, and I am listening,” he wrote.

According to Greene, additional counseling services will be available to students who were negatively affected.

“Your voice is also important in next steps to create a more welcoming environment for all students,” he wrote in his apology. “We will be providing opportunities for our community to come together to dialogue, learn and heal.”

According to an ARC Communications email sent to students Oct. 18, ARC will hold a facilitated Talking Circle on Thursday, Oct. 24, from 2 to 4 p.m. in Student Center community rooms 3 and 4.

The Talking Circle will address the flyer and provide a space for students to express their feelings without interruption.

“As the Faculty Coordinator, I take full accountability for allowing the poster to be placed on the door,” he wrote. “[I] hope over time, I can show through my actions where my heart and intentions stand. I may make mistakes along the way and if so, I plan to remain accountable and learn from them.”