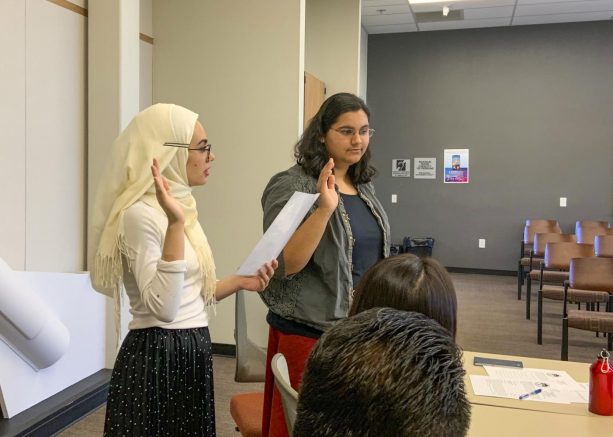 The American River College Associated Student Body met Sept. 13 to swear in a new senate member, approve Bill F19-XX and confirm whether or not the spring Student Senate for California Community College (SSCCC) General Assembly should occur during the college spring break.

In this meeting, the board appointed a new member, Naomi Dasari, for the Legislative Analyst position.

“I am to help [the Director of Legislative Affairs] document bills and research them,” Dasari said. “I was in Student Council when I was in middle school, but that’s as far as my experience goes.”

The only bill on Friday’s agenda was Bill F19-XX, which states the allocation of up to $700 for the purchase of food for the board’s Student Leadership and Development Educators (SLADE) conference. This conference is for all Los Rios Community College student senate boards to train and gain leadership skills.

With a unanimous vote between board members, the bill was adopted. The SLADE conference will be on Sept. 27.

Next, board members went back and forth in discussion of whether or not the spring general assembly should be set during spring break. When the topic was first proposed, Senator Laurie Jones motioned that the board contact SSCCC to request that the assembly not intentionally be set during Spring Break. Sen. Jones withdrew her motion with no objections after further discussion from other board members.

One of the resolutions the board hopes to present at SSCCC is the Stipend Resolution for undocumented students campus wide, according to Aesha Abduljabbar, Student Senate President.