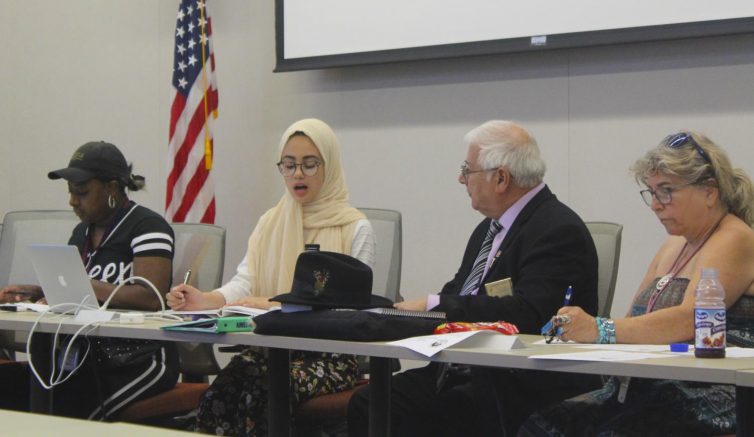 The first meeting also served to introduce members of the senate to the public. It also introduced the Senate’s new president Aesha Abduljabbar to the Senate and the student body. It is her first semester as Student Senate President.

The ASB Training Bill F19-XX would allow for the senate to spend $300 to reimburse senate advisor Brett Sawyer for a two-day training in parliamentary procedure and lunch. The bill passed unanimously.

The Senate then passed the Parliamentarian Consulting & Training Bill F19-XX bill which would provide training to the student senators. The senate agreed to reallocate up to $5,000 to pay for the training. This will pay for training for the entire semester for all members of the Senate. This bill also passed unanimously in favor of the reallocation.

The next bill that was voted on was The ASB Desktop Color Printer Bill F19-XX  that would seek to reallocate $1,000 to pay for a desktop color printer for the ASB. Though the bill passed 7-1, Senator Alexxandria Paige said she felt that it was an unnecessary purchase because there was no need to spend the money on a printer when there are plenty of places on campus available for color printing.

“I object towards [the bill]. There are resources on this campus that will provide those services, without touching any type of money like that,” Paige said.

However, other senators like Abduljabbar, said they felt that because of the volume of the papers that ASB needs to print, and their need for making colorful, eye catching flyers, that the color printer was a necessary purchase for the Student Senate .

“CAEBE and ASB will use it in case we have an event. You see, we can force students to look at color, we can’t print on black and white because it will just be ignored,” Abduljabbar said.

She also expressed the importance of being able to print in a timely manner and not spend time walking across campus to the art and design department to print colored pages. Abduljabbar also felt like it would save time not having to go and check to see if the order was finished on time.

“I truly truly hope that we have a great semester together and I truly hope that we get to learn together… but we all accepted this challenge and we all wanted to do something for our students.” said Abduljabbar, as she introduced herself to the new senate members and the American River community.

The meeting ended with opening the floor to public comments.

The next ASB meeting take place at 10:30 am on Friday September 13.