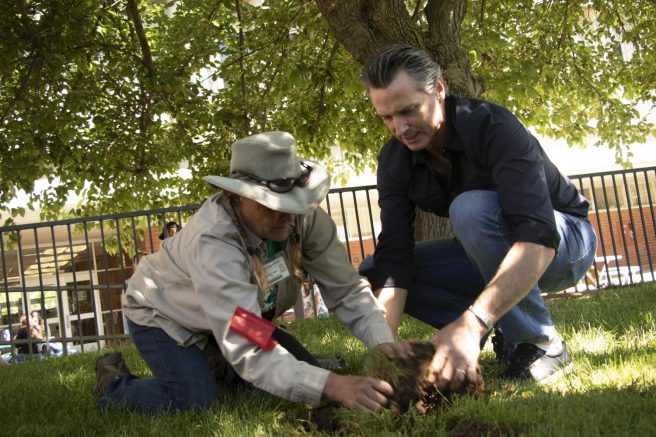 California Governor Gavin Newsom assists American River College groundskeeper Brenda Baker with fixing a sprinkler outside of the Ranch House during International Workers’ Day on May 1, 2019. (Photo by Ashley Hayes-Stone)

Newsom also discussed and signed an executive order at ARC which acknowledges California’s growing globalization and technological advancements, and how they often lead to the automation of jobs which threatens many workers’ job security.

During the Governor’s visit, Arambula, who has worked at ARC for 23 years, coached Newsom through changing a light and repairing a paper towel dispenser in Davies Hall. Arambula said she voted for Newsom in November 2018.

“I think he’s an honest man and he’s going to do good for California,” she said. 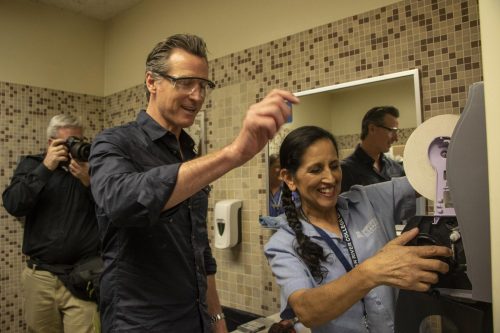 Newsom also helped Baker dig up and extend a sprinkler fixture outside of the Ranch House. Baker, who attended ARC before being hired by the school in 1997, and Arambula discussed their feelings surrounding their job security. Neither worker said they felt confident in the future of their careers and the rising cost of living in California.

“I don’t know anyone who’s confident at all,” Baker told Newsom. “I don’t get a lot of raises, but I know a gallon of milk costs more and I go through two gallons a week.”

According to Newsom, the executive order addresses concerns surrounding job security by organizing a work group who would look at areas of the economy that are more vulnerable to automation, and define ways to protect and retrain people to adjust for the changing workforce. The coalition will present its findings in February 2020.

“Every milk carton has a sell-by date. In many ways we do in terms of our education,” Newsom said. “You’ve got to keep upping your skill, you’ve got to keep investing in your own development.”

Newsom emphasized the role that community colleges play in the working economy and the dignity in their work.

“Two-thirds of people that walk through the door of higher education, come from community colleges,” he said. “And yet we focus so much on CSUs and UCs, but two thirds of that opportunity is taking shape right here.”

Opinion: The thirst for something more at ARC