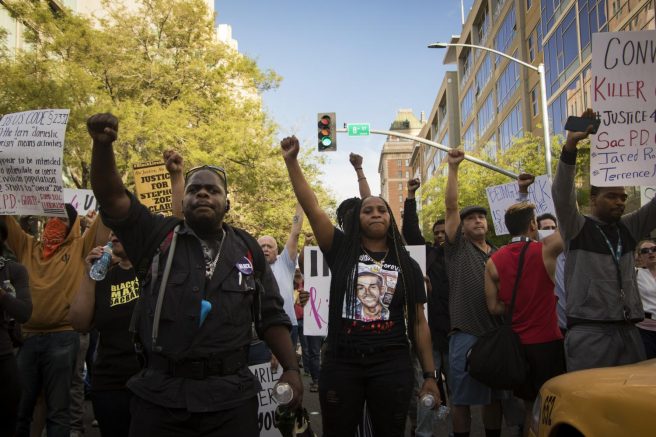 Demonstrators raise their fists as they block the intersection of J and 8th in protest of Stephon Clark's death on March 29, 2018. (photo by Ashley Hayes-Stone)

Sacramento District Attorney Anne Marie Schubert announced Saturday there would not be any charges filed against the officers who shot and killed 22-year-old Stephon Clark almost a year ago.

Following a nearly hour-long PowerPoint presentation detailing the case, Schubert declared the shooting justified. Schubert said the two officers believed Clark was armed with a gun when they confronted him and chased him into a backyard last March. Investigators later discovered that the officers had mistaken an iPhone for a weapon, according to the report.

Schubert’s announcement was met with reactions across Sacramento from local groups, activists and politicians, as well as from the American River College administration and groups on campus.

Responses included protests organized by Black Lives Matter Sacramento and a statement from Gov. Gavin Newsom, who called for “increased community policing and other efforts to build trust between residents and law enforcement agencies,” according to the Sacramento Bee.

The death of Clark ignited multiple protests across Sacramento last year, adding to a nation-wide series of protests against police brutality and racial profiling against black people.

“This has undoubtedly been a tragic chapter in Sacramento’s history,” King wrote. “As leaders of our colleges, we will continue to foster understanding, compassion and optimism on our campuses.”

Greene also addressed the situation in a similar, school-wide email on Saturday.

Greene said the announcement has caused a range of emotions, from confusion to anger, for all LRCCD campuses, because Clark was a former Sacramento City College student.

“As we seek to make sense of his death, and the deep social dynamics present in our communities … it reinforces for us that the work our colleges are doing to address issues of equity and social justice has never been more important,” he wrote. “Our commitment must and will be to expand those efforts and accelerate that work.”

The Universal Engaging Inclusive Transformative Education (UNITE) group at ARC set up a space for students to write messages to Clark or about his killing.

Dronme Davis and Raven Kauba both work with UNITE and said that having a visible way for people to express their emotions was important to them.

“I think a lot of times when tragedies like this happen, people have a lot … of visceral sadness and fear and anger and not a lot of outlets … and if they do show it, especially if they are people of color, it comes with a lot of criticism,” Davis said.

ARC will hold a discussion and support space for students affected by Clark’s death, Monday at 4 p.m. in the HUB. Greene also reminded students that the Counseling Center is open Monday through Friday for students to express concerns.

“We understand that many people may have fears, sadness, anger, and other emotions during this time,” Greene wrote. “We hope to come together as a community during this time to support one another and discuss ways in which we can move forward with actions that move our community towards social justice.”

Davis said it’s important for ARC and the district to acknowledge tragedies like this.

“I think that this whole idea that we can like be neutral in times like this is completely ludacris, especially with things that have already happened on our campus this year, like the ‘It’s okay to be white’ flyers, in general vandalism and hate crimes,” Davis said. “It’s super necessary that they make it very clear that we are against this verdict as an institution and that black people need to be protected.”

Unauthorized flyers reading “It’s okay to be white” were found posted around ARC on Nov. 1, and SCC had multiple incidents of racist vandalism found on campus last semester.

“We have this expectation that people are going to be able to learn and soak in information even if they’re in danger the moment they leave this campus,” Davis said. “We have to make it clear we don’t stand for that.”

SCC will host a series of events and support in the coming week, Acknowledging the Life of Stephon Clark, concluding with a vigil outside of the Performing Arts Center at 5:30 p.m. Thursday.

According to Kauba, UNITE is sending members to participate in the SCC events and is also trying to coordinate events with University of California, Davis and California State University, Sacramento.

“[S]chool is supposed to be a place that people can expand themselves and learn and have a community,” she said. “If the community that’s there isn’t responding to a tragedy that’s affecting people, then it’s not doing its job.”

UNITE is also working on scheduling a march on campus at ARC in the coming week, according to Kauba.

Black Lives Matter Sacramento is planning a March For Stephon Clark on March 18, the one year anniversary of his death, beginning the Meadowview Light Rail Station at 6 p.m.