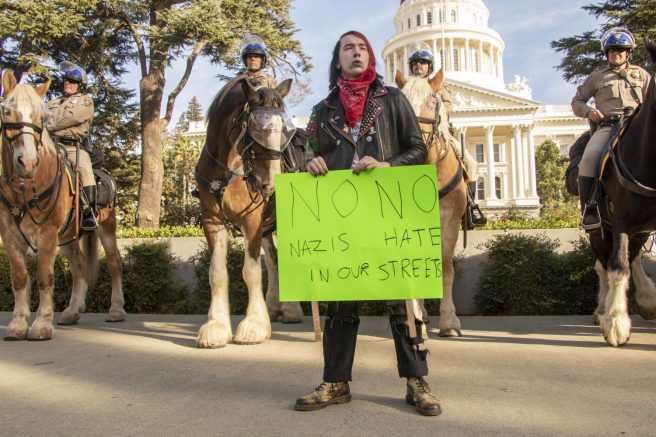 Counter protester Jules Miller holds up a sign that reads “No Nazi No Hate in Our Streets” during a “Turn California Red” conservative rally at the California State Capitol in Sacramento on Nov. 4, 2018. (Photo by Ashley Hayes-Stone)

Swastikas, racial slurs and death threats were found on Oct 1, scrawled on the stalls and mirror of a men’s restroom at Sacramento City College, according to the Sacramento Bee. The phrase “Time 2 fight back” and “#MAGA”—the letters a reference to President Donald Trump’s 2016 campaign slogan— were found among the graffiti.

This marked the first in a series of other incidents of racially charged vandalism, unauthorized fliers and incidents of intolerance on Los Rios campuses in the months leading up to the 2018 midterm elections.

A week later, on Oct. 8, a second incident of hate speech graffiti was discovered in the South Gym at SCC, according to the campus’s newspaper Sacramento City Express. This was followed by the discovery of more threatening and racist graffiti in a women’s restroom at SCC, on Oct. 15.

While the administration was criticized for taking almost two days to report and remove the graffiti in the first instance, by the third incident, the Los Rios Police Department promptly issued a district-wide RAVE alert in compliance with the Jeanne Clery Disclosure of Campus Security Policy and Campus Crime Statistics Act, notifying students of the incident.

The Clery Act, which was implemented in 1990, “is a federal statute requiring colleges and universities participating in federal financial aid programs to maintain and disclose campus crime statistics and security information,” according to the Federal Student Aid website.

In compliance with the Clery Act, the Los Rios Police Department released its 2018 Annual Clery Report on Sept. 25, which lists all reported crimes across all Los Rios Community College District main and satellite campuses.

According to the 2018 Clery Report, hate crimes have been on the rise on Los Rios campuses over the last three years.

Hate crimes are defined by the Clery Report as “a criminal offense that manifests evidence that the victim was intentionally selected because of the perpetrator’s bias against the victim.” Factors can include race, sexual orientation, gender and religion, among others.

In 2015, there were no reported hate crimes across all Los Rios campuses. The number climbed to one on-campus simple assault regarding race at ARC in 2016 and then rose again in 2017 to five across ARC, SCC and Cosumnes River College main campuses.

Three of the five reported hate crimes in 2017 happened at ARC: one “simple assault for sexual orientation” and two “intimidations for race,” according to the Clery Report.

Kelvin Burt, a sociology major who facilitated a Black Minds Matter session at ARC on Nov. 5.

After seeing the number of hate crimes and photos of the graffiti at SCC, Burt said he wondered about the mentality behind the crimes and that he hadn’t noticed the increase directly until he began to study at ARC.

“Coming from a background to where I didn’t have the same opportunities as some of my white counterparts when it comes to the type of curriculum or education that I’m getting, it wasn’t noticeable until I actually got to ARC’s campus and when I started to read about it in the literature,” he said, describing the realization as a veil being lifted from over his eyes.

The rise in intolerance seemed to reach its peak in the months before the election.

In pattern with the inflation of racially charged incidents on campus, at least two unauthorized fliers were also found taped around American River College on Nov. 1. Both read “It’s okay to be white.” 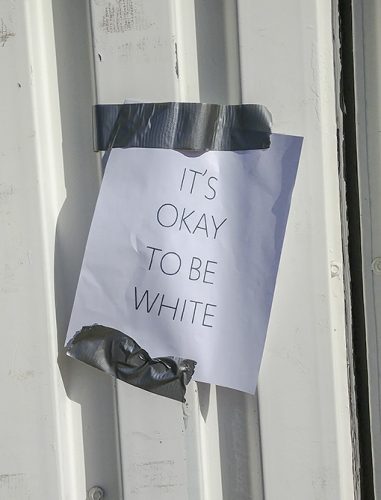 An unauthorized flyer was found posted on the ticket booth at the far right side of the football stadium near Stadium Parking Lot S. At least two flyers were found on American River College’s campus on Nov. 1 2018. (Photo by Jennah Booth)

According to ARC’s Public Information Officer Scott Crow, staff removed the fliers as they were found and the LRPD is looking into the incident.

Similar fliers were also found on and off campuses in cities across the country in the days leading up to the elections.

Burt said he was confused about the fliers, unsure if they were meant to be a joke or if they were somehow related to white supremacy groups.

“It can be confusing, from how I’m seeing it, it could be hurtful… the realities of it, especially when you haven’t even learned the history behind it,” Burt said.

According to the Washington Post, the “It’s okay to be white” fliers originated from the online forum 4chan, with the intent of instigating arguments over it’s own inherent racism, while not being explicitly so.

The fliers found at ARC sparked debate over the Current’s Facebook page where readers debated the intent behind them. This is what the people who ignited the slogan intended to happen according to the Anti-Defamation League’s website, a civil rights and human relations organization.

“The idea was to create a flier that had an (ostensibly) inoffensive phrase on it that would nevertheless be treated as racist by people who viewed it, particularly liberals or members of the media,” according to the ADL’s site. “Their subsequent ‘overreactions’ would in turn ostensibly make those people lose credibility in the eyes of others and seem like hypocrites.”

The phrase “It’s okay to be white” however, has a long history in white supremacy, according to the ADL.

“While far from the most common white supremacist slogan, it was in use enough that white power music band Aggressive Force even used the phrase as the title of one of its songs; a song that dates back at least to 2001, if not earlier,” the ADL explains.

There was also speculation on Facebook, yet no confirmation, that the fliers were related to a “Turn California Red” conservative rally at the State Capital on Nov. 4, which was met with counter protests. 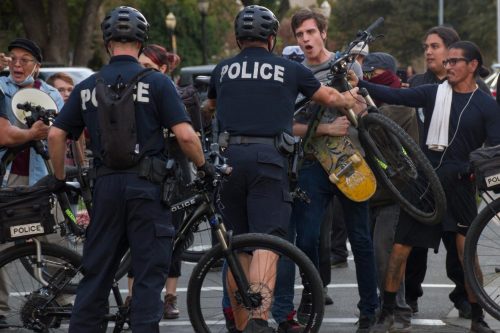 Sacramento Police use their bikes to push counter-protestors off the street during a Pro-Trump rally at the Capital on Nov. 4, 2018. (Photo by Patrick Hyun Wilson)

Burt said he felt media, specifically social media, acts as a double edged sword in these situations. While it’s given a voice to those who did not have one before, it can also shift and change too rapidly.

“It’s more in your face than it was before and now that you actually see it, on a national level and everything happens so rapidly, it makes it hard to kind of cope, and understand the impact,” he said.

ARC President Thomas Greene addressed the fliers, the hate graffiti at SCC and the shooting at a Pittsburgh synagogue on Oct. 27, which left 11 people dead and six injured, in a campus-wide email entitled “Hate Has No Home at ARC,” sent out to ARC students on Nov. 1.

“Many of us are concerned about a national increase in incidents that involve hate or racist speech and crimes,” he wrote, expressing shock and sadness over the tragedy in Pittsburgh and sending support to the ARC Jewish community and anyone who had been impacted.

Greene went on to address the acts of hate speech vandalism at SCC, which he confirmed are “consistent with reports that indicate incidents of hate, graffiti and otherwise, are on the rise nationally.”

He assured students that ARC is increasing its efforts to prevent vandalism and to promptly remove it if it’s found. Green encouraged students to report any vandalism to staff. If any hateful graffiti is found, it will be reported to the LRPD and students will be notified if it results in a law enforcement investigation, Greene wrote.

While administration attempted to get a handle on illegal or unauthorized vandalism, controversy reared its head in a legal form at ARC on Oct. 31, when a protester violated Admin Regulation 1413 in an attempt to express his personal beliefs.

The protester’s sign targeted all sorts of ‘sins’ from “LGBTQ,” “idol worshipers” and “weed smoker(s),” to “psychics,” “sex freaks” and “sports nut(s).” 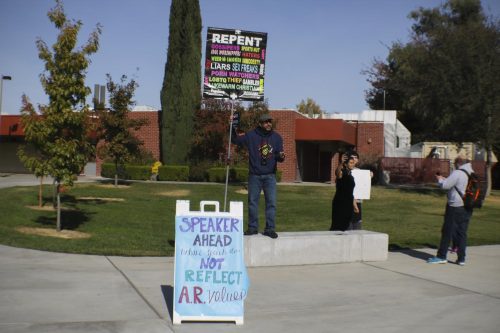 A protester holding a sign stands outside of the Student Center, while students display their own posters in response on Oct. 31, 2018. A sign reading “Speaker ahead whose speech does not reflect A.R. values,” is set up in the foreground. (Photo by Tracy Holmes)

Protected by District Board Policy 1413, District Administrative Regulation 1413, and District Board Policy 7142, which requires ARC to “provide a space for constitutionally protected free speech, irrespective of the beliefs expressed in that speech,” the protester was only guilty of not obtaining a permit before using a speaker to amplify his message.

Crow addressed the situation on behalf of ARC in an email to the Current.

“The fact that demonstrators are on our campus is not necessarily an indication of American River College’s values or views,” he wrote. “We are required to allow all organizations to exercise their rights to present their views by the Constitution, the law and Board Policy.”

Students underscored Crow’s message by creating counterprotest signs, passing out paper hearts and inviting others into the Hub and Pride Center.

After extending a business card to the protester, which was denied, Dean of Equity Programs and Pathways Joshua Moon Johnson encouraged passerbys to ignore the man. He said that engagement of any kind is exactly what the protester wanted.

According to Burt, the school is doing its best to create an inclusive and safe environment for it’s students.

Despite this, Burt said there is more students can do to better respect each other, such as having an open mind about others beliefs and ways of life.

“Historically, when it comes to students or individuals, especially who are in my community, you have to always cope with a lot of things that are going on.” he said reflecting on the recent events and comments from the President.

“I love America. I grew up saying the pledge of allegiance and I’m pro-military, veterans and all of that,” he said. “It’s just sad seeing that coming from a president and the influence and rhetoric that he’s putting out in regards to immigration and people of color. How can you challenge that when it’s in American history?”

According to Burt, the best thing anyone can do it to try see where others are coming from.