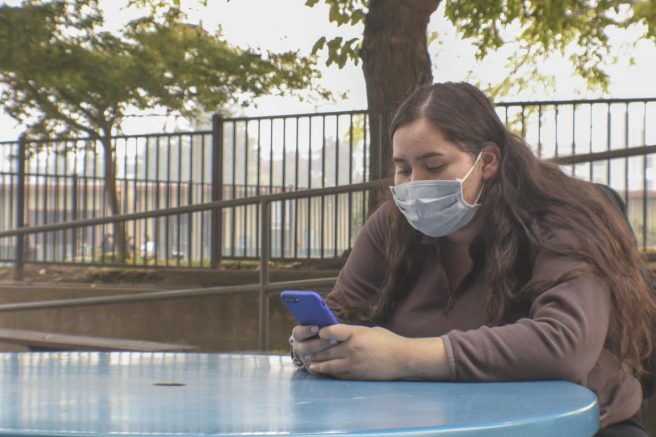 Shania Villafan, a communications major, wears a mask at American River College to combat the unhealthy air from the Camp Fire in Butte County, on Nov. 14 2018. (Photo by Tracy Holmes)

Los Rios Community College District announced through a district-wide RAVE alert on Wednesday that classes across all Los Rios colleges are cancelled through the rest of the week, effective immediately, due to poor regional air quality conditions.

According to an email sent by ARC’s Public Information Officer Scott Crow, all college and district offices are closed through the week as well, “except for essential operations such as security/police and critical IT operations.”

The district closure came after California State University, Sacramento, University of California, Davis and Yuba College had already cancelled classes because of poor air quality due to the Camp Fire in Butte County.

This is the second day of closures for Sac State and UCD; both campuses were expected to resume classes today but due to student backlash, remained closed, according to the Sacramento Bee.

Los Rios campuses have remained open since the Camp Fire started last week. The fire is now the largest and most deadly fire in California history, leaving 63 people dead and over 600 missing, according to CNN.

Air quality index (AQI) readings are considered unhealthy if they are 150 or higher, meaning there are particles in the air that can cause health issues or exacerbate existing health problems. The air is considered very unhealthy when the AQI is over 200. At 9 a.m. this morning, Nov. 14, the AQI was 241 and at 2 p.m. it was 181, according to Sacramento region’s Spare the Air site.

The decision to cancel classes followed a few hours after an email was sent to students from LRCCD Chancellor Brian King and co-signed by the four Los Rios colleges’ presidents, including ARC President Thomas Greene, addressing the district’s decision to keep campuses open earlier in the week.

“While some regional organizations like K-12 school districts, other community colleges, and state agencies have remained open, others like Sac State and UC Davis have chosen to close. There is no perfect solution, and either decision has potential negative impacts on students,” the district wrote in the email. “The colleges are working to mitigate negative impacts of the smoke in our buildings.”

Before ARC cancelled classes, students, faculty and staff tried to work despite the smoke. For example, oscillating fans were put in Davies Hall to keep smoke out of the building. 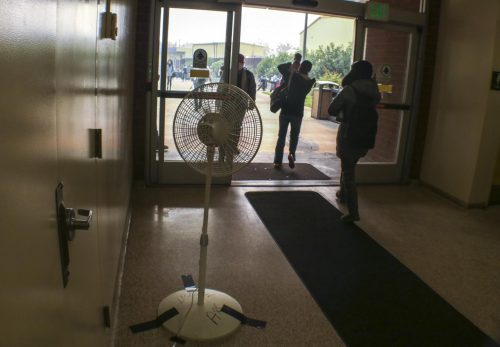 Fans were placed at both ends of Davies hall to combat the smoke at American River College on Nov. 14, 2018. One student wore a mask to filter the smoke particles from the Butte County fire. (Photo by Tracy Holmes)

The nursing office was also handing out masks, however, they were not the respirator N95 type masks that the Environmental Health Investigations Branch of the California Department of Public Health recommends, which will filter out small debris in the air.

Despite ARC restricting and cancelling outdoor activities, the district’s initial decision to stay open Tuesday and Wednesday was met with criticism from students and staff, as well as over social media.

Elizabeth Johnson, a receiving clerk and Vice President of Service Employees International Union, Los Rios Support Services chapter, said she was concerned for her colleagues when the Operations Office did not initially provide workers with masks.

“[I] know we have a lot of blue collar workers that have to go outside to work, at [minimum] traveling from building to building, also doing trash runs,” she said. “I called the Operations Office and asked if they were going to have masks, I was informed that they weren’t going to be providing them.”

According to Johnson, workers were eventually provided with adequate masks today.

Prior to the notification that classes had been cancelled, Ray Singh, a culinary and hospitality student, said he wished that professors would not take roll while the air quality is bad.

“I would like the school to be closed because it’s terrible outside, but since it’s not I just go to school,” Singh said.

The district send out a second RAVE alert Friday morning informing students that they will be notified by 5 p.m. on Sunday, Nov. 18, of the colleges status on resuming classes Monday.