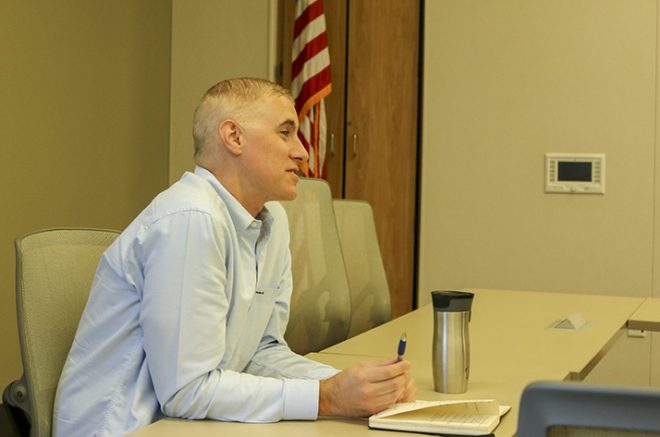 The Associated Student Body Clubs and Events Board met Oct. 16 to introduce its new adviser Brett Sawyer to the club representatives, address available positions, and to promote active clubs.

The CAEB meeting started with an announcement from Student Senate President Rebeca Rico-Chavez, who introduced Sawyer as the new adviser. He also serves as the Student Life Supervisor.

“This is my second day on the job so I am learning,” Sawyer said. “I have been on the campus in a different role. I use to work next door in the Hub, so [I’m] looking forward to meeting with all of you if you have any questions.”

The discussion was then moved forward by Rico-Chavez, who announced a point-earning system which works to promote clubs at ARC.

The points are awarded to the clubs who attend CAEB meetings and for the participation of club representatives. At the end of the academic year, the points will translate to an amount of money the clubs can use to buy the supplies they need.

The discussion was then moved forward by Sawyer, who announced that CAEB is seeking new representatives.

“[A]nyone who is interested on being (on) CAEB … we are looking for people,” Sawyer said.

Rico-Chavez continued the meeting to announce the available positions to club representatives.

“We need members on CAEB,” Rico-Chavez said. “The only positions that can be filled this semester are Director of Activities, Director of Communications [and] Director of public relations.”

The three announced positions are a great opportunity for ARC students to build their career and skills in leadership positions.

Rico-Chavez then moved the discussion by asking the club representatives if they had any reports to share regarding their clubs.

Tina Hardoin, a business and accounting major, is a representative for National Alliance on Mental Illness student group on campus; she spoke at the meeting about her club’s needs.

“[Our club] is coordinating and gathering resources such as housing, counseling, foods or any sort of services that students might need, and we are combining [it] into database and making an app and website to make it very accessible to the students on campus,” Hardoin said.

Rico-Chavez asked all club members to provide NAMI club branch located at ARC with any sources or information they may have.