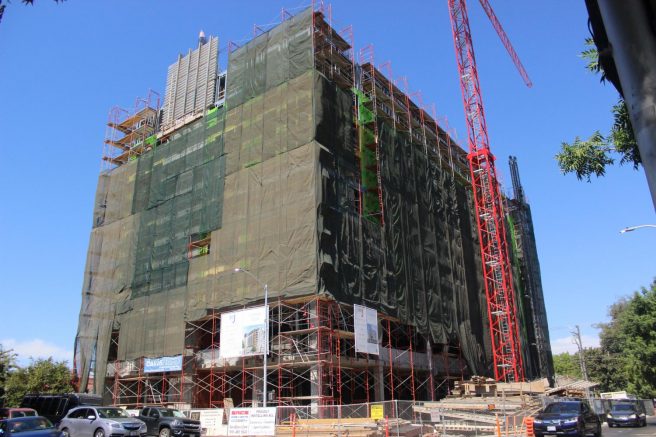 The 19J Apartments under construction on Sept. 9, 2018. The apartments will offer over 173 residential units with a size range from 312 to 480-square feet, of which the smallest will cost less than $1,000 a month, according to Mohanna Development Co. The project is expected to be finish by December 2018. (Photo by Itzin Alpizar)

As students at American River College struggle to meet the high prices of the city’s rental market, the Sacramento City Council and Mayor Darrell Steinberg held a public housing workshop on Sept. 4 to set a plan for temporary rent control provisions as part of the four-part plan to bring housing relief to the city’s residents and college students.

The proposal’s intention is to provide short-term protections for tenants while minimizing the risks to developers and property owners.

“I would like us to consider within 30 to 60 days … [bringing] back proposals that would allow us to more efficiently utilize housing stocks to increase availability of housing units by exploring rental assistance for intergenerational student housing,” Steinberg said.

The plan would also allow owners of less than five units and or with units built after 1999 to be exempt from the proposed 5% cap on rent increase per year within other exemptions, which means that new developments will not be rent controlled.

Dobrew said her commute to campus has also gotten longer in order to get that price.

At the same meeting, Assistant City Manager Michael Jasso, who presented a detailed overview of the city’s housing crisis, said that Sacramento is not building enough units to keep up with the growth in population in the last years.

“Over the last five years only about 3,000 units have been produced in Sacramento. There were only 1,600 [units] completed in 2017, none of which was regulated as affordable,” Jasso said.

According to Jasso, the city had an average of a 9% year-to-year rental price increase in 2017, making it the highest in the nation in which the homeless population rose 30%, from 2015 to January 2017.

All these statistics show the struggle in the market that is affecting ARC students.

“I see a lot of houses but [they’re] not affordable, many housing complexes, but I can’t afford those. We are barely holding up [in] the apartment that we have, and it is $1,300 a month for 1,000-square feet and those are like $3,000,” said Kandice Thomas, a psychology major at ARC, who lives with her fiance and her mother.

Rental advertisements on websites like Craigslist and Zillow often list the minimum qualifications for renting at two or three times the cost of rent in monthly income, a credit score over 600, and good rental history. Some ads don’t include parking and utility fees in the listed price.

In order to rent a unit, a student will need a security deposit and the first month of rent when signing the lease. These expenses are high enough on their own, but for a student, they are added on top of the cost of tuition, books and supplies, along with the rest of their living expenses.

“I live with my parents. I keep trying to move out, but it just doesn’t happen for me,” says Aiden Smith, a psychology major. “I cannot get an apartment if I only have seasonal jobs.”

ARC, like most community colleges, does not offer housing facilities, but students looking for rentals can use informational resources on campus.

The Center for Leadership and Development offers contact information cards for students to fill out if they are looking for a roommate, a rental, or tenants, but ARC is not associated with any of the people who list their information.

“I share an apartment with my friend. I cannot afford an apartment by myself and I wanted to get that experience on how it is to move away from home,” said Anthony Barreto, an undecided major in his first year at ARC.

Programs such as Disability Services and Programs for Students (DSPS) sometimes have lists of low-income apartments, but calling some of the numbers for low income-based apartments gave unsuccessful results: some units were already taken and others have a waiting list that is more than two years long, such as La Valentina Apartments in Midtown.

If a student is facing special housing circumstances, such as those experiencing homelessness, domestic violence, and other high-risk situations, ARC’s Health Center can guide them to additional resources.

New changes in the city’s rental market will be expected by the end of the year after California voters decide over the measure of Proposition 10 on Nov. 6. The proposition, referred to as the Local Rent Control Initiative, would change the limits on rent control imposed by the Costa-Hawkins Rental Housing Act of 1995.

According to the website ballotpedia.org, the act provides that “…cities cannot enact rent control on (a) housing first occupied after February 1, 1995, and (b) housing units where the title is separate from connected units, such as condominiums and townhouses… landlords have a right to increase rent prices to market rates when a tenant moves out.”

Passing proposition 10 would repeal the act, allowing rent control by the local government, which would have a say in how much landlords can charge to tenants renting a house or an apartment, according to ballotpedia.org.

International real estate business person and ARC professor of economics Kamau Kinuthia said it is not a good option to control the prices of housing right now. He set forward the example of New York City, where tenants stay in their apartments for many years to avoid paying two, three or even four times what they are paying, and the list for rent controlled apartments continues to grow.

“People are going to be converting their apartments into condos because condos are not subject to rent control, so where they [property owners] can just sell them to investors and developers if you cannot charge what you want,” Kinuthia said. “A developer is not going to be interested to invest on a place that might affect their profit market, so they will invest somewhere else.”

Some developments are planned to offer more affordable units to highly-needed areas downtown, such as the 19J Apartments and the Press Building. 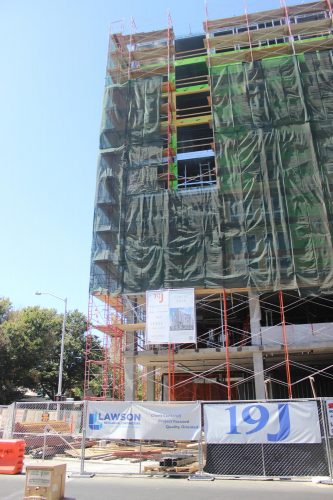 19J Apartments will offer over 173 residential units with a size range from 312 to 480-square feet, of which the smallest will cost less than $1,000 a month, according to Mohanna Development Co. The project is expected to be finish by December 2018. (Photo by Itzin Alpizar)

19J Apartments, located on the corner of 19th and J streets, will offer over 173 residential units with a size range from 312 to 480-square feet, of which the smallest micro-unit will cost “less than $1,000 a month,” according to an interview on Comstock’s Magazine with developer Nikky Mohanna, principal of Mohanna Development Co.

The Press Building started construction during the beginning of August, at 21st and Q streets, in the old parking building for the Sacramento Bee. It will have 277 units, according to the Sacramento Business Journal.

Kinuthia said that finding a solution for the housing crisis of ARC students is “controversial.”

“The correlation between tuition and the rental market is a catch-22,” Kinuthia said.

The  funding for education in California comes from federal government, but some comes from property taxes as well.

“I’m talking about the catch-22 because as the property values goes up, the tax from that property is definitely going to go up, they [IRS] can collect more property tax, so that means there’s more money available … and that money is used for services such as education,” he said. “However if the property values are too high, students are going to have a hard time finding a place to stay.”

The best option, according to Kinuthia, is to let the market decide and to not implement rent control.

“Unfortunately, if we don’t do this carefully we’re going to send ourselves deeper into more problems,” he said.

During his presentation, Steinberg said that he wanted to make it clear that he does not favor permanent rent control in Sacramento.

“I believe that building more affordable units is the only successful … long term strategy to stabilize [rent prices] and provide quality housing for Sacramentans of all income levels,” Steinberg said.

The third meeting for the Sacramento City Council to address the housing crisis does not have a set date at publishing time.