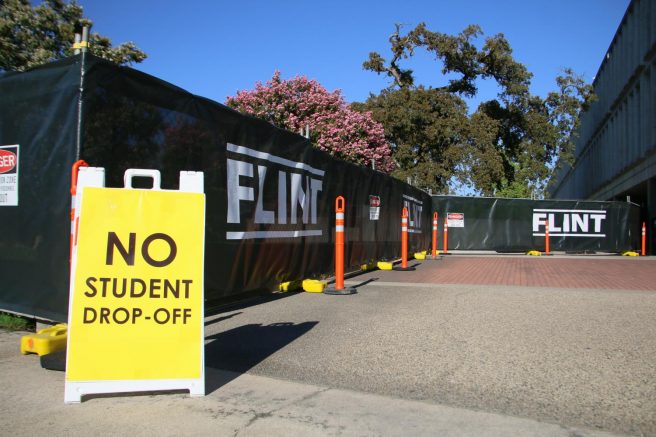 Half of American River College's staff parking lot E is fenced off on August 30, 2018, due to the demolition of the old Liberal Arts building. The demolition will make way for the construction of a new Science, Technology, Engineering and Mathematics (STEM) facility. (Photo by Jennah Booth)

Students attending classes at American River College may find parking, getting across campus and avoiding disrupting noise increasingly difficult this semester as construction begins on the new Science, Technology, Engineering and Mathematics – or STEM facility.

Cheryl Sears, director of Administrative Services Operations at ARC, has been in her role for a little over a year and a half, but says she has been working with the district for much longer.

“My job is to facilitate the pain the campus is going to feel with construction,” Sears said.

While students have only recently begun to see and feel the effects of the campus renovation, Sears says the plan for the new STEM facility has been in the works for over a year.

According to Sears, once the STEM building was approved by the state, the Los Rios Community College District hired architects to optimize the alloted 57,000 square-feet and to ensure “we don’t have a brand new building and we’ve already outgrown it.”

They eventually decided on a three-story design by architect Gould Evans.

“About a year ago, they put everything up to bid and so the construction companies, they bid on it to say who can do the job for however much money,” Sears said.

Los Rios Facilities Management is a group that manages facilities across the district and deals with contractors and vendors. They chose Flint Builders to construct the new STEM building and presented the package to the Los Rios Community College District Board of Trustees for approval.

The district evacuated and fenced off the Liberal Arts building area in early 2018 in preparation for construction, but it wasn’t until the Board of Trustees approved the bid from Flint Builders for construction in July that the fencing was expanded.

An e-mail sent to staff by ARC’s Public Information Officer Scott Crow, on behalf of the American River College Operations Office, spelled out the new construction developments on campus and noted the expansion of the fencing in early August.

“We know this construction will impact the campus because of the loss of parking spaces as well as walkway changes. We will work hard to mitigate impacts from the situation,” Crow wrote.

According to Sears, when Flint was contracted with the project, they had to evaluate the construction zone and expand the fence to fit their standards.

“They needed to be able to get all of their equipment in there and be able to tear things down and create a safe zone for our campus community,” Sears said. “So there’s no chance anyone is going to get hurt.”

Since the construction area was originally fenced off, additional parking spaces behind the Learning Resource Center and half of the staff parking lot E have been blocked off as well.

According to Crow’s email, parking lot E will no longer serve as a drop off and pick up location for students. Signage and police are now instructing students to be dropped off and picked up near the Oak Cafe or in the area just north of stadium lot S.

“The police are really trying to get everyone to go to those [new] spaces because I went over [to lot E] today and there were cars lined up … it’s just too congested,” Sears said.

In addition to the blocked off parking, “the walkways between Davies Hall and the [Learning Resource Center] and the [Information Technology Center] and the old Liberal Arts facilities will be off-limits because of the demolition work,” Crow wrote.

Josh Bonzo is a filmmaking making major at ARC and works with the Universal Engaging Inclusive Transformative Education – or UNITE program.

Bonzo said the construction hasn’t been much of a problem for him or other returning students but he thinks it might be a hassle for new students trying to get around. “I dont think it’s a big deal for us, but since there’s new students, they obviously don’t know how the campus was before,” he said.

Sears said her top priority is to get the pathway between Davies Hall and the LRC open so students have better access to the campus.

The hydronic line will run from the Fine Arts facilities, all the way across campus to the STEM building. It will support the school’s heating and cooling system across all buildings and facilities. According to the ARC Campus Operations website, metal plates will be placed in pathways over the trench to allow students to cross safely through construction areas.

Until the pathways are opened, Campus Operations is working to alleviate the disruptions the construction has on students by providing a golf car shuttle to help people get around the fenced off areas and across campus.

“We’re trying to be as helpful as we can, especially for people who have any mobility issues,” Sears said. “One of the biggest complaints we get is the noise.”

Bonzo said that while he doesn’t currently have any classes in Davies Hall, he can imagine that the noise is disruptive to the students there.

“I could hear the people blowing the leaves outside of the classrooms at Davies, so if I was in those classes I would definitely be hearing those drills,” Bonzo said.

In terms of students with sensitivities to sound, the ARC Campus Operations will post construction dates weekly on its website so that students are aware well ahead of time.

Demolition of the 32,000 square-foot Liberal Arts building will happen during school hours and in multiple sessions. In a tentative schedule provided through e-mail by Matthew Blevis, operations technician of Administrative Services at ARC, Flint currently predicts the first demolition to be Sept 24-26.

Before then, Flint has to remove any potentially hazardous materials from the buildings, which were originally built in the 1960’s, according to Flint’s website. Due to the structures’ age, many materials used in its construction can now be considered dangerous, especially if inhaled.

In order to remove these materials, the buildings must be sealed off and a fan will suck out any particles stirred up as the inside of the buildings are gutted.

“It’s called abatement,” Sears said. “What they do is they go through and they tear up the floors and the walls and anything in the ceiling so that there’s no concern when they destroy the building … There’s no dust or anything that could float out of the areas and we could breath in.”Consecutive demolitions are scheduled through Nov 6. ARC Campus operations will provide an updated schedule on its website. Blevis warns that the schedule may change.

Once the area is fully demolished, Flint will begin constructing the STEM facility; the entire project costing an estimated $32,053,000, according to its website.

The three-story structure will feature standard classrooms and faculty offices. In addition to the basic amenities like outlets and efficient heating and cooling due to the new hydronics line, the building will also be equipped with an engineering yard, a multi-story art piece, many indoor and outdoor gathering spaces and collapsable glass walls.

“It’s exciting, because the outcome is going to be awesome,” Sears said. “We can open it and have an indoor and outdoor learning environment.”

Despite the new STEM facility’s modern features, many of the currently enrolled students facing the effects of the construction will never reap its benefits, as they may graduate or transfer before the structure is finished and the facility opens.

While working closely with ARC administration and Campus Operations to provide updates and timelines, the speed of the entire project is dependent on Flint Builders pace of construction and is predicted to continue through the fall of 2020.

In the meantime, students and faculty can refer to the ARC Campus Operations website for updates and information on upcoming construction dates.