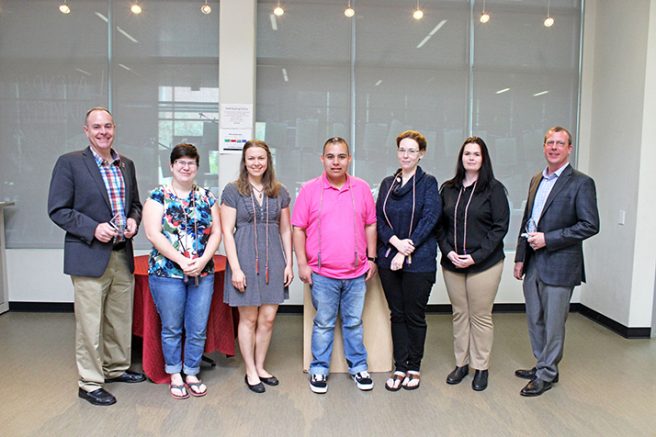 A Lavender Graduation is an event that is held in addition to a college’s main graduation ceremony to provide a space for LGBTQ+ graduates to celebrate alongside their biological or “chosen families”. “Chosen family” are those who LGBTQ+ people may recognize as family members or their support system, regardless of a lack of biological relation.

The event was held in The Hub, outside of the Pride Center, and was lined with rows of seats full of students, family, faculty, and alumni.

After a welcome speech and a brief history of Lavender Graduation given by Melanie Dixon, Associate Vice Chancellor, and Joshua Moon Johnson, Dean of Student Services, the five graduates were set to accept their certificates. Emilie Mitchell, Pride Center Coordinator, introduced the students.

Wendy Campbell was one of these graduates; she received her rainbow tassel and certificate of achievement for her Sociology degree.

“I think it’s important that we have a space to specifically recognize LGBTQ+ students, and to give them room to share their experiences to each other and staff,” Campbell said. “It’s nice to see all the intersectionality in the room, and everybody is so happy for each other, getting through life and making it to graduation.”

Additionally, three Pride Awards were given out; a student award, a faculty and staff award, and an alumni award. These awards were given on the basis of their contributions to the campus and LGBTQ+ community. 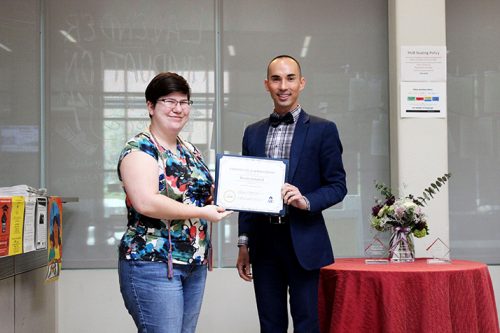 Wendy Campbell receives a Certificate of Achievement from Joshua Moon Johnson before giving a short speech. (Photo by Hannah Yates)

After the awards, ARC English professor Susan Howe gave closing remarks, during which she described the accomplishments and struggles that LGBTQ+ students face in higher education, including the campus climate during Prop 8 — the 2008 proposition to make same-sex marriage illegal in California.

She recounted her experience taking part in an organized moment of silence on campus and rally against Prop 8 that was disrupted by noisy counter protestors, a notable event in ARC history, but ended by emphasizing the changes she has seen on campus.

“And now as I stand here, 10 years later, I look out at all of you, you graduates especially,” Howe said. “Successful graduating college students, in front of ARC’s first newly open Pride Center, in our historic first ever Lavender Graduation ceremony, I am overwhelmed with pride. In you, and in our college.”