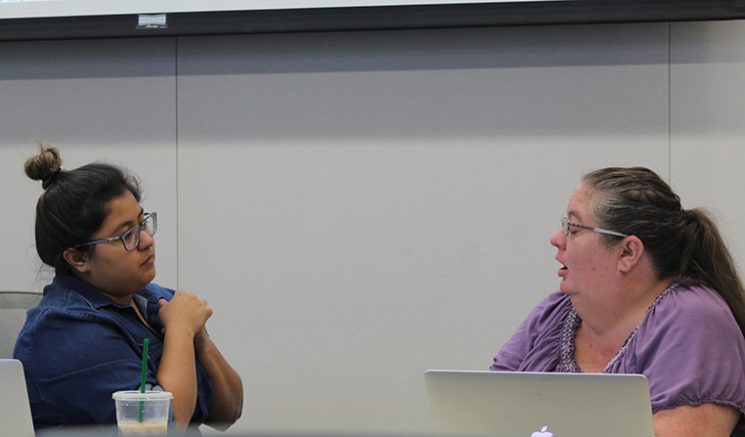 American River College’s Associated Student Body Student Senate met April 27 in its second to last meeting of the academic year. The main intent of the meeting was to review and discuss recent amendments to the ASB Constitution and Bylaws.

Student Senate President Deborah Hernandez passed the Presidential chair to the sitting parliamentarian to be able to join in the discussion.

This means that for this specific debate, Hernandez, who as president does not have the ability to vote, relinquished her position to the parliamentarian who would act in her stead as president, letting Hernandez vote as a member of the board.

Vice President Earl Crouchley III made a motion to adopt the amended ASB Constitution, which was the seconded by Hernandez in order to make amendments.

A large portion of the time was designated to discussing the removal of a section titled “Absences, Tardies, Election Failures.”

The section read as follows: “The existence of a vacancy based on unexcused absences, unexcused tardies, the failure to elect a candidate at an election, or recall, shall be determined by a unanimous vote of the remaining elected members of the component of the Associated Student Body.”

Crouchley, who also serves on the Governance Committee that helped create these amendments, said that the reason for removing this section from the constitution was to give each of the student boards, such as ASB, Club and Events Board and Joint Budget Committee more freedom.

“The Constitution is way more difficult to revise and make changes to in general, instead of putting it in each bodies’ bylaws, which can be altered by those governing bodies themselves,” Crouchley said.

Senate Adviser Juan Blanco disagreed with the amendment however, and said he was worried about inconsistencies throughout the three boards.

“My only concern with that change is that if CAEB decides to change it, so let’s say CAEB decides that one absence constitutes a removal but Senate and JBC keep it the same at five or whatever number, it’s going to be inconsistent,” Blanco said. “I think having it in the constitution has that blanket for all three boards.”

Hernandez agreed with Blanco and made a motion to keep the section in the constitution, meaning that any absences or tardies would be the same for all three boards.

Senator Alexandrina Chavez seconded the motion, however Crouchley objected instead making a motion to amend the wording, striking the word “unanimous” from the section and replacing it with “two thirds.” Hernandez seconded this motion, letting it pass with no objections.

Student Senate will reconvene May 4 for its last meeting of the school year.

Instructors dispute the validity of Rate My Professors