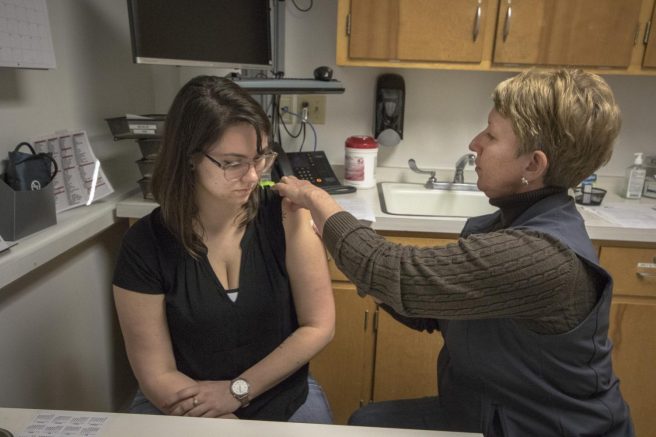 As this year’s flu season tears through the country, the American River College Health Center is advising students to get their flu shot.

In response to the recent media buzz, Arnott said that people should be concerned about the flu every year.

“This year is really no different,” Arnott said. “The reality is flu seasons vary in severity depending on a number of factors including the characteristics of circulating viruses, the timing of the season, how well the vaccine is protecting against influenza infection, and how many people got vaccinated.”

According to the CDC’s website, the most important thing to do in preventing the spread of the flu is to get a vaccination. The CDC defines the flu as: “a contagious respiratory illness caused by influenza viruses that infect the nose, throat, and sometimes the lungs. It can cause mild to severe illness, and at times can lead to death.”

“As a [registered nurse] and public health nurse I highly encourage students to get the flu vaccine,” Arnott said. “I always ask students if they can afford missing two weeks of class or work. The answer is usually ‘no’ but that is potentially what you are looking at if you come down with the flu.”

Getting a vaccination can also protect those around you, according to Arnott, especially those who are more vulnerable.

“It’s not possible to predict with certainty if the flu vaccine will be a good match for circulating flu viruses,” Arnott said. “The flu vaccine is made to protect against the flu viruses that research and surveillance indicate will likely be most common during the season.”

Recent studies have shown that vaccines can be about 40 to 60 percent effective in reducing illness during seasons when the shot is a good match to the circulating virus, according to Arnott.

“As a [registered nurse] and public health nurse I highly encourage students to get the flu vaccine. I always ask students if they can afford missing two weeks of class or work. The answer is usually ‘no’ but that is potentially what you are looking at if you come down with the flu.”

Getting a flu shot may also reduce the duration and severity of flu symptoms if someone still gets sick, according to Arnott.

According to the CDC, the flu is spread through small droplets made when someone who is sick coughs, sneezes or talks. These droplets can land on people and objects up to 6 feet away.

Arnott said the virus can survive on objects for 24 hours.

“Routine cleaning of surfaces, frequent hand-washing, and coughing into your arm/covering your cough should reduce the chance of spreading the flu,” she said.

According to the CDC, anyone, including healthy people, can get the flu. People with chronic medical conditions like asthma, diabetes or heart disease, people over the age of 65, pregnant women and young children are at a higher risk of developing serious flu-related complications.

Carissa Polk is a nursing student at ARC and says she is aware of the severity of this year’s flu season. She got her flu shot in November.

Her 2-year-old son also received his first flu shot this year. Polk says while her son hasn’t had the flu this year, her grandma has.

The campus Health Center offers a very limited number of free flu vaccinations to currently enrolled students on a first-come, first-served basis. More information can be found on the Health Center’s website.

Be the first to comment on "With flu season here, experts advise people to get vaccinated"