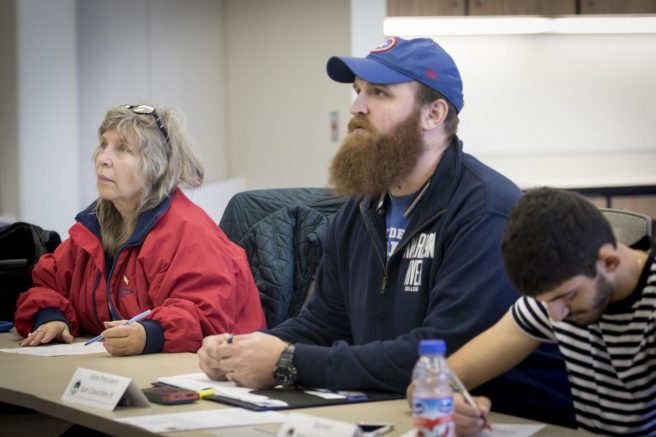 Senators Laurie Jones (left) and Earl Crouchley III listen to the reading of a letter that could potentially be sent to Secretary of Education Betsy DeVos. (Photo by Ashley Hayes-Stone)

DeVos has issued new guidelines which will change how public colleges and educational institutions must handle cases of sexual assault and sexual harassment in accordance to Title IX. These new guidelines will raise the burden of proof for victims.

The letter was written by Chas Newman, a senior at Georgetown University, and has been sent to colleges across the nation requesting signatures of support before it is to be sent to DeVos.

It is stated within the letter that DeVos’ proposed revisions would place “… an undue burden on victims of sexual assault.”

Student Senate advisor Juan Blanco explained that in the court’s decision is based upon the idea of a reasonable doubt, whereas in the collegial system it is based upon preponderance of evidence. When a case is reported to a college or university they then have the right to intervene in the situation until the case has been solved.

“Raising the burden of proof may make it more difficult for colleges to act quickly,” Blanco said.

The topic has been tabled until the next senate meeting, at which members will have time to review the letter more thoroughly.

Campus Pulse: What would make you [a professor] strike?