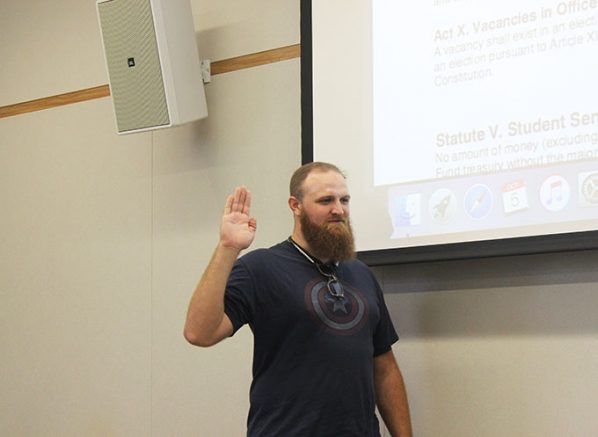 Before running for office, Crouchley hadn’t attended any Student Senate meetings, but decided to run after being approached by three fellow military veterans.

“You know, here’s how I honestly found out about it; I did not attend any of the meetings, I did not go to anything and I’m not even hip on all of the events,” Crouchley said while campaigning on September 26.

It was the veterans, Crouchley says, who inspired him to run for office.

“I was working one day in the Veterans Resource Center and I had three other vets come up to me and say ‘hey, we think you should do this’ and I laughed and said ‘okay, if you really think so, show me the paperwork’.”

After providing Crouchley with the necessary paperwork he decided that if that’s what people want, that’s what he’ll do.

Crouchley will be working with Senator Laurie Jones on a consent action item for the Deferred Action for Childhood Arrivals (DACA) Advocacy Week which will take place between October 16-20.

“Senator [Lidia] Lara is currently writing a…we had a student voice during public comment that they wanted senate to write a resolution to support a Dream(er) center on campus, so I know Senator Lara is currently working on that resolution,” Student Senate Adviser Juan Blanco said.

The board voted unanimously to approve the allocation of $200 in funding to the Computer Science Club’s “Debugging Bee” contest. The bill was sponsored by Senator Mahmoud Abduljabbar.

CAEB reflects on Club Day and plans for future events