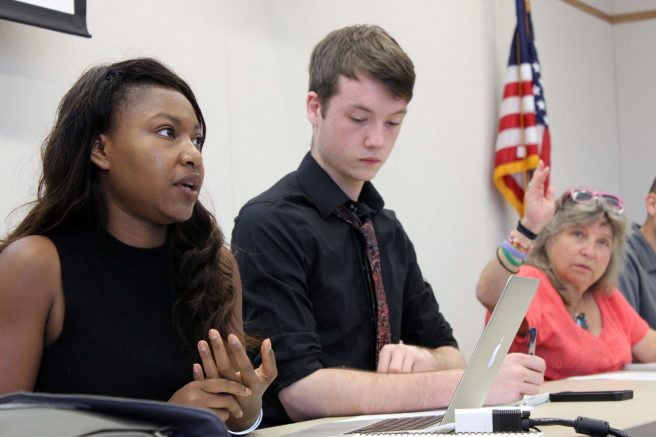 Senate President Valencia Scott (left) discusses the fomation of the judiciary committee as Justin Nicholson listens and Laurie Jones waits to be called on at the first senate meeting of the fall semester on Sept. 1. (Photo by Robert Hansen)

A previous version of this article stated that the ASB was considering creating a lactation room. The lactation room already exists, the ASB was considering renovations to it. The previous version also stated that a bill was passed to contract Lorenzo Cuesta as parliamentarian, but his name was removed before the bill was passed.

In their first meeting of the fall semester, the American River College Student Senate discussed a bill for the renovation of the lactation room, a bill for new cards for Associated Student Body members and newsletter announcements on Thursday.

The lactation room is next to the restrooms in the cafeteria and is intended to be a designated area for ARC mothers to breastfeed or pump for their children.

According to Student Senate Vice President Alejandra Hilbert, in order for the funds to be allocated, the bill will have to be approved by the Buildings, Grounds, & Safety Committee.

The bill would allocate $2,000 for possible items such as a rocking chair, a table to use a breast pump, improved lighting, a diaper changing station, cleaning supplies and literature for the mothers to read.

Murals and pictures were also discussed as decorations to improve the aesthetic of the room.

Senator Julian Lopez asked the board if they knew the cost to maintain the room per semester to which Hilbert replied that she did not have an estimate, but the cost to keep courtesy supplies stocked was, according to her research, “a couple hundred dollars.”

A bill to allocate $300 for ASB to contract a parliamentarian for the board passed unanimously.

Student Senate Advisor Juan Blanco explained that contracting a parliamentarian “provides a different perspective in regards to running meetings” and the contracted individual will sit next to Student Senate President Valencia Scott to advise on the ins and outs of parliamentary procedures.

Another bill to allocate $150 to design, print and replenish business cards for ASB members passed unanimously.

At the end of the meeting, Clubs and Events Board President Justin Nicholson shared an ASB newsletter intended to “display things that student government is doing, give clubs a forum to address their projects, to get calendars out there, to really show what the student body is doing on campus and what it looks like to be an active member.”

Nicholson stated that he hopes to have directors of communications and media relations to participate in constructing the newsletter with their presidents or vice presidents having purview over editing and publishing.

The newsletter is currently untitled and the release is to be announced.