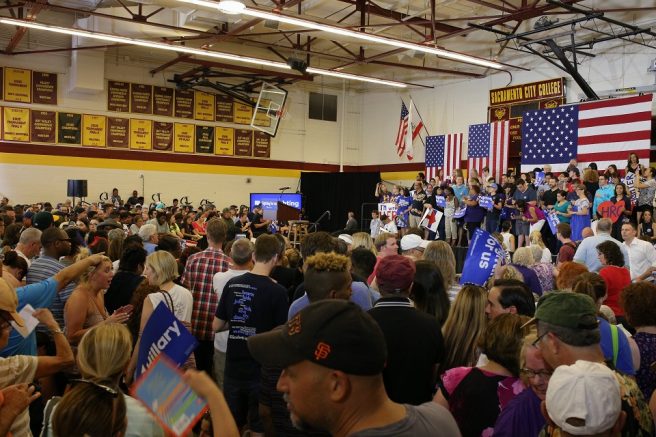 Attendees pack the North Gym at Sacramento City College to hear Hillary Clinton speak at her rally in Sacramento on Sunday. (Photo by Kyle Elsasser)

The blistering heat didn’t stop the line of hundreds of Hillary Clinton supporters as they waited to waited for the Democratic front runner to speak in Sacramento on Sunday.

The line started forming around 7:45 a.m. with some attendees driving over six hours to see the former first lady.

Among the line that snaked throughout Sacramento City College’s campus were former and current American River College students, including Annette Miranda, who is majoring in English. 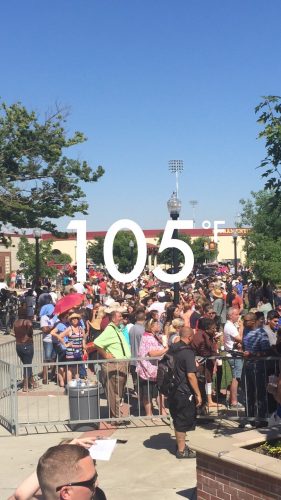 Attendees waited through triple digit heat to get into the Hillary Clinton rally in Sacramento.
(Photo by Jordan Schauberger)

Miranda said that she thinks Clinton is the only candidate who’s “powerful and intelligent enough” to get anything accomplished in the White House.

“I think she’s more aware of those who come from lower income households,” Miranda said. “She’s a strong advocate for women’s issues, a big supporter of Planned Parenthood and believes in higher education.”

Although she would be “OK” if he was elected president, Miranda said Bernie Sanders “doesn’t have the strength” to initiate change, but adamantly stated that she thought Donald Trump was “a joke.”

Also in the crowd was Sacramento mayoral candidate Darrell Steinberg, who came out to show his support for Clinton.

“Hillary is the most qualified and we have to unify to get her in the White House,” Steinberg said.

Several attendees said that they’ve been fans of Clinton since Bill Clinton was in office, but Tali Torres said was a women’s studies major in college and researched Clinton all the way back to the 1970s. 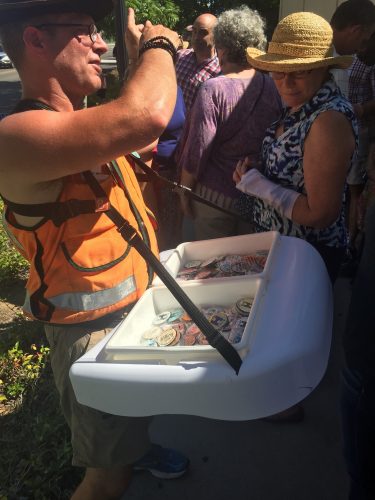 Torres, who graduated from ARC in 2008, said that her research into Clinton opened her eyes to how much work she’s been doing for the country her whole life.

“What she started doing even all the back in college is astounding,” Torres said. “She worked with the Children’s Fund and has been working for women’s equality as far back as the ‘70s.”

There was a general consensus among the supporters in line that it would bad for the United States to have Donald Trump in the oval office.

Torres said that she agreed with Clinton’s statement on Trump that the U.S. should “build bridges, not walls.”

Hundreds have showed up to hear #HillaryClinton speak in Sacramento. #HillaryinSac pic.twitter.com/r7ZNN0uhqT

However, not all Clinton supporters completely disagreed with Trump’s policies. Max Dixon, who took an accounting class at ARC last semester, said he was voting for Clinton, but thought that Trump also had some “desirable qualities.”

“Trump definitely has some pros. I like that he’s self-funded,” Dixon said. “Keeping jobs in the country is important and that’s what Trump brings to the stage. (Hillary’s) husband, Bill, signed NAFTA when he was president and that took jobs out of America.”

The North American Free Trade Agreement (NAFTA) was agreement that came into effect in 1994 and created a trilateral trade bloc between Canada, the U.S. and Mexico.