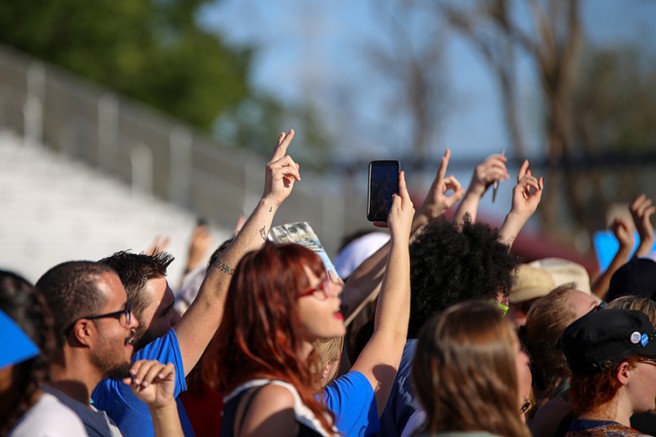 A member of the audience holds up a peace sign while waiting for presidential candidate Bernie Sanders to begin his rally at Bonney Field in Sacramento, California on May 9, 2016. (Photo by Kyle Elsasser)

Thick anticipation swirled with an early summer heat last night at Bonney Field as 15,000 people waited for Bernie Sanders to take the stage at the first stop of his California tour.

A crowd that had started lining up as early as 8 a.m. sang, laughed and chanted together, ignoring the blazing sunlight and packed conditions.

In the massive line snaking through the parking lot earlier in the day, there were pizza parties, poster making and sing-alongs.

Once inside, filling the crowd were seniors, families, and young people – some who are still too young to vote in even the next election, but wanted to show their support now for issues that are important to them.

“I’m about to go to college next year, and I can’t afford college.” said Aria Schwartz, a high schooler from Sir Francis Drake high school. “Bernie is talking about that.”

This abundance of youth evoked a definitive air of change and progress, and displayed the rapidity with which the political climate has changed.

The amount of young people who showed up directly contrasts the traditional idea that teenagers and twenty-somethings are uninterested in the world around them, especially in regards to those who govern it.

This shift is felt not just by observers, but by the participants themselves.

The rally evoked the oft-over dramatized but truly uncommon essence of Woodstock, which saw groups of college students bonding over common interests, demonstrating for their causes and sleeping on the short lawn of the soccer field.

Is it Sanders convincing the millennials to stand in line for hours and creating this environments, or is it something else?

According to Jessica Sanford, an English major at Sacramento City College, it’s a little bit of a lot of things.

The audience aren’t alone in feeling like the youths are ready for change.

During his speech, Sanders directly referenced his popularity among younger and first time voters.

He outlined his plans to make the first two years of college free, an announcement that was swiftly followed by a deafening roar of approval from the attendees.

“Every week I’m challenged by the establishment media, asking me how I’m going to pay for it,” said Sanders. “We should impose a tax on Wall Street speculation. That’s how we’re gonna pay for it.”

Every few words, Sanders would have to pause, as chants broke out across the masses, shouts of “Feel the Bern” or simply, “Bernie.”

These moments, more than anything, showed how an unlikely candidate has truly engaged a group of people often overlooked in the political arena, and galvanized them to action as well as activism.