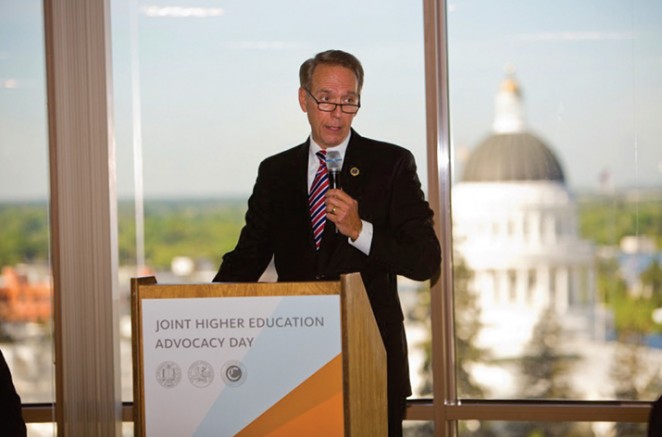 State community college chancellor Brice Harris, who was the chancellor of the Los Rios district from 1996 to 2012, announced that he will retire from his state position in April 2016. (Photo courtesy of the California Community College system)

Harris joked that he “failed” at retirement last time — he was only retired for about a month in 2012 — and plans on spending time with family and doing things that his career wouldn’t allow him the time to do.

“My wife and I have some travelling that we want to do,” said Harris. “In a job like this, it really does take an awful lot of time, and I’m getting at a point where I want to make sure I do some other things before I get to where I can’t,” said Harris, who is 67.

His path to becoming the chancellor of the nation’s largest community college system, with 113 colleges and 2.1 million students, took him from the Midwest to the South to California.

After finishing graduate school at the University of Arkansas at Fayetteville, Harris, an Oklahoma native, landed his first community college job in Kansas City, Missouri.

In 1991, Harris came to California to become the president of Fresno City College. In 1996, he  came to Sacramento, accepting the position of chancellor of the Los Rios Community College District.

Hired to lead California’s community colleges in September 2012 after retiring as head of the Los Rios Community College District the month prior, Harris spearheaded several policies that he hoped would improve the system as a whole.

He was instrumental in implementing the community college bachelor’s degree pilot program, which makes it much more affordable for students to earn a bachelor’s degree, and he oversaw the system’s recovery from spending cuts.

“It has been an honor to work with and for Brice,” said Crow. “Brice is first and foremost a man of great character and integrity, someone who always draws spotlight back to students and their success. His greatest legacy will be his commitment to student access and success.”

Harris said he was lucky to have the opportunity to work as Los Rios chancellor.

“As always the case with people who sit in chairs like I do, (we) really aren’t the ones who do all the work,” said Harris. “I think the system had tremendous success while I was lucky enough to be here.”

Harris said he believes that the Student Success Initiative that he launched was “the greatest thing that happened” during his tenure as chancellor.

“The greatest of those (achievements) was the implementation of the Student Success Task Force recommendations, which are designed to ultimately help students succeed at greater and greater rates and also to close the performance gap by raising ethnicity and age and gender education rates,” said Harris.

Harris’ tenure was not without challenges. Accreditation issues were always prevalent during his time as chancellor, with City College of San Francisco being the most troubling.

Harris worked with the Sacramento Chamber of Commerce as the chairman of their board. He said that he was flattered to be the first educator to hold that post.

“I think the connection between the community colleges and the community is really important and the chamber is a really good example of that,” said Harris.

ARC professor Ronald Morris praised Harris’ business acumen and viewed him as a great leader for the system.

“During his time as Chancellor of the Los Rios Community College District, the four colleges did well and we enjoyed his managerial and financial leadership.” said Morris. “Harris is a great leader and a very nice man.”

Harris had a few parting words for the students that he served.