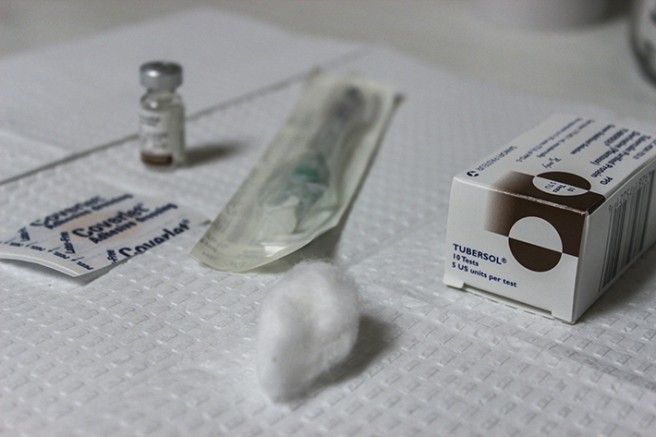 The diagnostic agent Tubersol, right, is used to test for tuberculosis by causing a mild allergic reaction in those who have contracted the disease. (Photo by John Ferrannini)

By Matthew Peirson and John Ferrannini

In an original version of this story, the word tuberculosis was misspelled in the last sentence.

An unidentified American River College student is in isolation after having been diagnosed with active tuberculosis, according to a statement made by the Sacramento County Division of Public Health on Nov. 17.

As many as 160 students and faculty may have been exposed, according to Laura McCasland, the public information officer for Public Health.

The school does not know if the student was diagnosed with multidrug resistant tuberculosis or standard tuberculosis,

according to Pam Whipple, a nurse at the ARC Health Center.

Those who may have been exposed were sent an email through their Los Rios gmail accounts, according to ARC public information officer Scott Crow

Letters of notification were also sent in the mail.

“The email is asking for them (those potentially exposed) to be tested or screened,” said

McCasland, who added that “you have to be in close proximity for extended period of time” to contract tuberculosis from one who has it.

The school originally had no plans to send a general notification to students. After local media ran stories on the diagnosis, the Health Center did send an email on Nov. 18 advising caution.

“There is no longer any risk of TB exposure to ARC students and staff,” the email said. “Exposure to a person with the active disease must be very close and over a prolonged period of time for others to become infected with this germ. Further, the majority of people who have been infected with tuberculosis do not progress to having active tuberculosis disease and, therefore, they are unable to transmit the germ to others.”

Symptoms of tuberculosis include a cough that lasts longer than three weeks and coughing up blood or mucus.

Be the first to comment on "Health Center conducts tuberculosis tests"