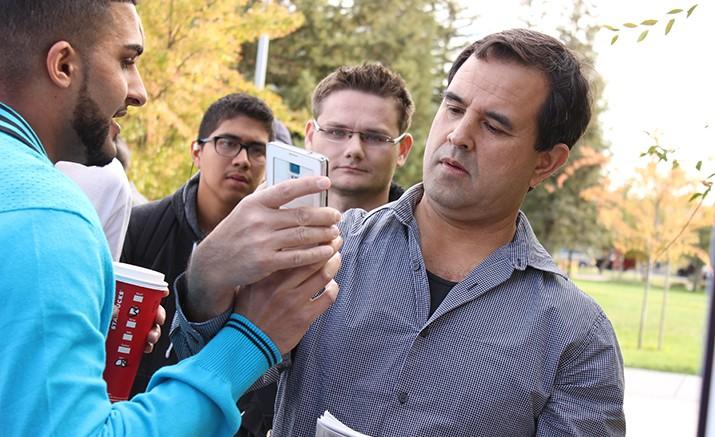 ARC student Nate Ihsan uses his phone to show a verse in the Quran denouncing killing to anti-Muslim activist Vincent Bradshaw, who erected a sign reading 'Why Islam Kills' in front of the Student Center on Tuesday. (Photo by Barbara Harvey)

Anti-Muslim activists sparred with students Tuesday after they erected a booth and sign that said “Why Islam Kills” outside of the American River College Student Center.

Coming on the heels of the Islamic State’s attack in Paris that left 129 people dead and hundreds injured Friday, the activists — who identified themselves as Christians but refused to identify with a particular denomination or any organized group — said that they wanted to “engage people.” 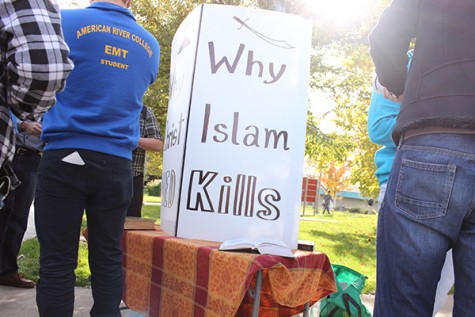 A sign reading ‘Why Islam Kills’ sits near the Student Center on Tuesday. The sign sparked discussions between ARC students — many of them Muslims themselves — and anti-Muslim activists. (Photo by Barbara Harvey)

Another activist and former ARC student, Victor Chan, said that his goal is to convert Muslims to Christianity.

“We’re trying to raise awareness to the gospel of Christ in contrast to the teaching of Islam,” said Chan. “Islam was spread by the sword, not the missionaries.”

ARC student Holden Aguirre said that he had been listening in to some of the arguments between the activists and students, and felt that the activists were making unfair assumptions.

“Brash generalizations are never good,” said Aguirre. “You can’t just group people under one umbrella you can’t just say that some people are doing something that they are all the same.”

“There is a fine line between hate speech and free speech,” said Blanco. “I think there needs to be a Brave Space set up to talk about this.”

1 Comment on "Students debate with anti-Muslim activists on campus"