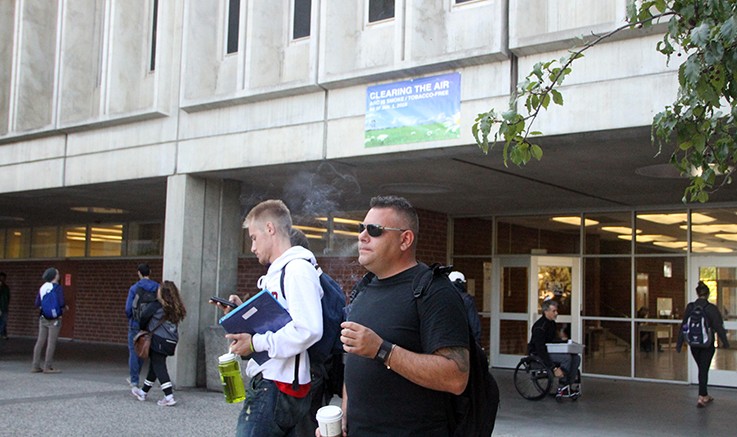 Matt Paiva smokes a cigarette in front of Davies Hall beneath a sign alerting students to the change in American River College policy that will ban tobacco use effective Jan. 1. (Photo by John Ferrannini)

Implementing American River College President Thomas Greene’s decision to ban tobacco on campus beginning Jan. 1 is up to a committee of administration, faculty, staff and students that meets on the second Thursday of each month in the administration building.

“The decision has been made,” said Dan McKechnie, the co-chair of the Tobacco/Smoke Free Committee. “This committee is more about the implementation of it.”

The committee plans to discuss how the new policy, which bans all use of tobacco products – including electronic cigarettes – at ARC, will be enforced.

On Nov. 19, ARC will be one of more than 1,000 campuses participating in 1DayStand, a national event that challenges people to quit smoking for one day, according to Laurie Jones, a student representative on the committee.

“They won’t be doing cessation services here but the Health Center will have referrals for them,” said Jones.

Ray DiGiulio, who co-chairs the committee with McKechnie, said that the committee has not discussed enforcement, but that the plan is to take a “soft approach probably for the first semester.”

“There will be people who go to the public sidewalk who we will not be able to restrict from doing so,” said DiGiulio. “We can control the environment of the campus, but we are not the smoke police who are going to tell everyone who’s a smoker that they are breaking the law when there is no such law to that effect.”

Whether the college police or student discipline will handle violations is not something the committee has the purview to decide.

“It’s not a black and white decision,” said McKechnie. “Enforcement is not necessarily a vote decision as to who enforces because there’s so many other details that go into it.”

DiGiulio said that the ban will not be enforced in people’s cars.

“Somebody’s car is their personal place,” said DiGiulio. “Someone in the car, even with the window down, is not impacting other students. They’re impacting themselves and that became the threshold.”

Both Jones and DiGiulio said that the ash trays will be repurposed.

“They are are probably going to become flower planters,” said DiGiulio.

According to DiGiulio, Carol Maytum of Breathe California helped to come up with the motto for the new policy — “Clearing the air.”

Students to protest at March in March

Be the first to comment on "Smoking to still be allowed in cars, on sidewalk"