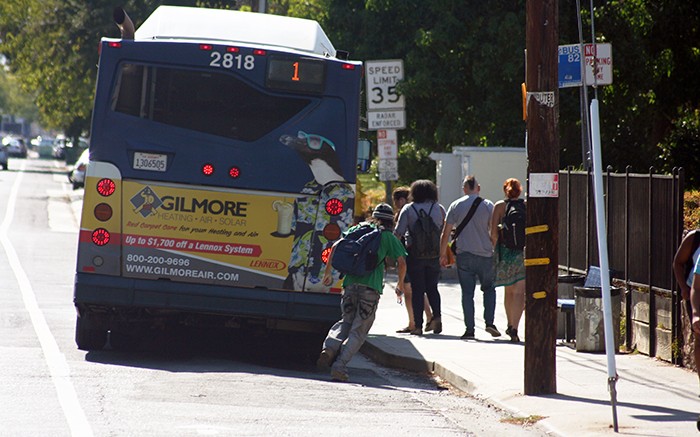 Students walk toward the entrance of the No. 1 Bus on the corner of College Oak Drive and Orange Grove Avenue on Aug. 31, 2015. Measure A, which renewed the universal transit pass, has passed after a vote by Los Rios students on eServices. (Photo by John Ferrannini)

A previous version of this story falsely reported that the student body presidents of the Los Rios colleges asked regional transit to exempt disabled students from the three unit minimum for the universal transit pass. Also, it has been clarified that a 50 percent discounted bus pass would be $50.

Like many other students, Romy Ewing regularly catches the bus and light rail to travel between Los Rios campuses to get to her classes. That may change, however, if students reject a measure up for a vote on eServices on Sept. 22 and 23 that would renew the universal transit pass until 2021.

The universal transit pass (UTP) currently allows Los Rios students to travel on all Sacramento Regional Transit (RT) light rail and buses for a fee ranging from $5.54 to $16.62 per semester paid by all students as part of their registration fees.

The contract between Los Rios and Regional Transit ends in November 2016, after which there will be no UTP unless students approve Measure A.

“(UTP) is so great because so many people have no other way of getting to school,” said Ewing. “It’d be a shame if someone couldn’t get to school because of something like that.”

The fees would not be covered by the Board of Governors (BOG) fee waiver, according to Juan Miguel Blanco, adviser for the Associated Student Body student government.

“That’s going to cause some difficulties for some students,” said Blanco. “That’s the honest truth.

“It is an ultimatum. Either students agree with the proposed agreement or students lose the bus pass.”

RT aims to increase the average fare for Los Rios students from 15 cents to 57 cents a trip.

If the cost falls below 50 cents per trip then, according to the draft terms for negotiation approved by the RT Board of Directors, RT can decide to terminate the agreement with a notice of one year.

Another change from the current agreement is that students taking three or less units would no longer be eligible for the UTP.

“Many disabled students take between two and three units,” said Laurie Jones, an American River College student who serves as treasurer for Region 2 of the Student Senate for California Community Colleges.

RT said it is working now to address these concerns.

“The concern relative to disabled students enrolled in three units or less has recently come to our attention,” said Rosemary Covington, the assistant general manager of planning and transit system development for RT, in an email. “We are working with Los Rios staff to address the issue.”

ARC student Bruce Rand said that allowing only students with more than three units at the school to have a UTP may encourage students to take more units at ARC.

“This seems quite important,” said Rand. “It gives encouragement for students to bump up their units a little bit.”

Students taking three units or less, however, would be eligible for a discounted monthly RT pass, which is currently priced at $100 but would be $50 with a discount.

Students taking three or less units have also been deemed ineligible to vote in the election.

“The reason why that’s happening is according to the education code, if you’re not impacted by this measure, (the Los Rios district is) allowed to say you don’t get to vote,” said Garrett Kegel, the student senate president.

Jones critiqued the decision to limit the election to students who are taking more than three units.

“(The district is) saying they won’t be impacted but they will be because they don’t get a bus pass,” said Jones. “That’s a bit interesting.”

Cameron Weaver, the Los Rios student trustee, expressed his frustration with Measure A.

“We’re kind of in a situation where we don’t have a choice,” said Weaver. “There’s kind of one hand holding the cards right now.”

“They’re playing hardball. It’s take it or leave it,” Jones said. “If we don’t pass it, there will be no student passes at all. It feels a little odd.”

According to RT, Los Rios students accounted for 4.4 million rides on buses and light rail in the 2014 fiscal year. RT claims that if approved, the new agreement could increase their revenue by $1.4 million in the first year.

RT said the move to limit the UTP to students taking more than three units is an effort to cut down on fraud.

“Limiting pass sales to students enrolled in more than three units is designed to remove what has become an incentive for individuals who enroll in classes for the sole purpose of obtaining a lower fare on RT,” said Covington. “No RT passenger pays the full cost of a transit trip and any form of fare abuse helps reduce the percentage of the cost of a trip paid by our riders.”

ASB President on resignation: “They do not care about us”