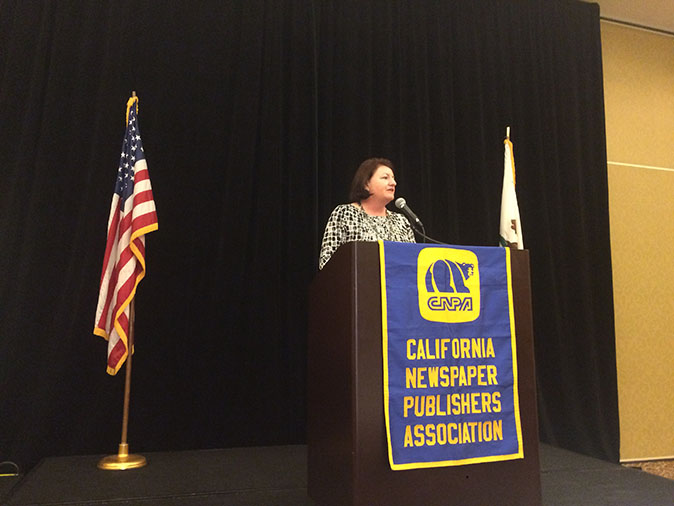 The CNPA is a trade group that represents over 800 newspapers in the state.

Assembly Speaker Toni Atkins, D-San Diego, was asked by the Current what proposals in the Assembly dealt with community colleges.

“The good news is that community colleges are getting an additional billion dollars this year because of Prop. 30, which is incredible because the community colleges ended up cutting so many classes during the recession,” said Atkins.

Proposition 30, which passed in 2012, increased taxes in California for the expressed intention of preventing cuts to education.

“There is a wonderful workforce development, apprenticeship, and training, all of this is starting to come together and we need to connect the kinds of jobs needed in our state with the kinds of workers. The community colleges have led the way on this,” said Atkins.

Kristin Olsen, R-Modesto, the California State Assembly minority leader, was asked by the Current if the Republican caucus has any proposals for the California Community College system.

“The number one issue in the northern part of the Central Valley I see is just being able to get into a classroom,” she added.

Olsen reiterated, however, that the mission of the California Community College system is to provide “lifelong learning” opportunities, according to the system’s strategic plan from the chancellor’s office.

“It’s not that everybody who goes to community college needs to transfer, they need to stay open for workplace training opportunities, et cetera,” she said. “I’m a musician and the opportunities that Modesto Junior College provides for musicians in their adult life is awesome.”

Assemblymember Jim Cooper, D-Elk Grove, said in an interview with the Current that he is concerned about helping improve the quality of high school education so as to make students better prepared for college.

“We’re getting our bill package together right now,” said Cooper. “I think we should put a lot of money towards education. It’s a lot easier to put money on the front end then to pay for the person in the jail that’s four blocks from here.”

Cooper went to American River College in the 1980s’ and taught public safety at the McClellan campus.

Kameron Schmid contributed to this report.