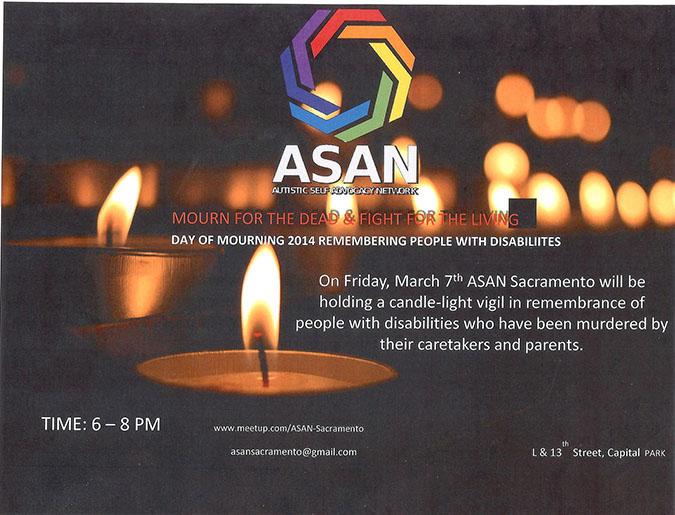 On March 7, a candle-light vigil will be held near the capitol, to remember those with disabilities who have been murdered by their parents or caretakers.

The vigil will be hosted by the Sacramento chapter of the Autistic Self Advocacy Network, a nonprofit organization.

ASANS is run by people with autism, including its president, American River College student Shayana Mendes.

During this annual vigil, Mendes will be making a speech and reading off a list of names of people with disabilities that have been murdered by their caretakers or parents and how they were killed.

“They feel stressed and frustrated, because they themselves don’t understand what disabled individuals go through,” said Mendes of those who kill people with disabilities.

Another reason she feels people do it is because they “are uncertain about what resources are available to them to assist in the process.”

Mendes, a senator in ARC’s Student Senate, hopes that people come out, support this event and remember those whose lives were taken from them because of their disability.

According to ASANS’s website, their mission is to inform “people about neurodiversity, which means that it is okay to be autistic and/or to have other neurological disabilities.”

Zachary Miller, vice president, who is also a second semester ARC student and one of the founders said this organization is very different from the popular organization Autism Speaks.

Mendes encourages students to bring candles and signs in support of the event.

How prepared is American River College for a mass shooting?