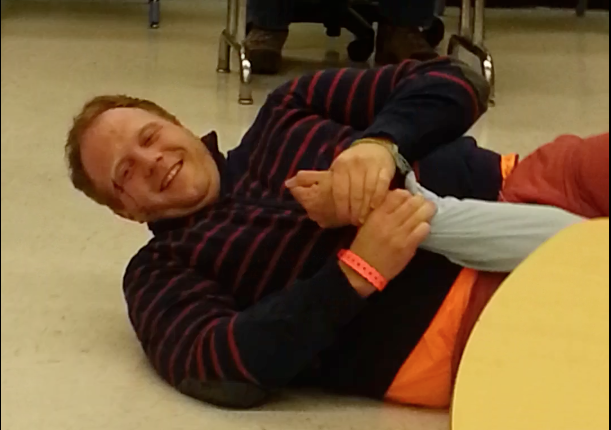 Screen capture from a YouTube video in which former student "Ross" is shown bleeding after wrestling with another student in professor Geoffrey Stockdale's interpersonal communications class on Oct. 14.

A video showing an impromptu wrestling demonstration in professor Geoffrey Stockdale’s interpersonal communications speech class in Davies Hall has caused the professor to be put on leave. The video ends with one participant bleeding from a wound on his head.

The humanities department office sent an email message Monday morning informing all the students of professor Geoffrey Stockdale that he is on leave. Stockdale’s various classes have been picked up by multiple ARC instructors for the rest of the semester according to Kate Jaques, humanities dean.

Communication and public information officer Scott Crow deferred all inquiries into the “professor Stockdale situation” to the district media spokesperson, Mitchel Benson. “(Stockdale) is on paid leave, and the investigation is ongoing,” Benson said, adding that colleagues at ARC agreed to takeover the course load so that no attending students would suffer as a result of Stockdale’s absence.

The demonstration in the video was an unplanned result of Stockdale’s class discussion; one participant, Kevin Messing, is in another of Stockdale’s courses the other is a former student, known only as “Ross.” These men were invited by Stockdale to the group discussion to spark better dialogue that evening in class.

The 56 second clip on YouTube got the attention of local news outlets including The Sacramento Bee, KCRA 3, and the Sacramento News & Review.  Messing and Ross are seen with shoes off preparing to demonstrate a single takedown. Ross hits his head on the ground and starts bleeding from a wound described by Messing later as “(needing) stitches.”

After the initial hit, Messing asks if Ross is all right to which he responds, “I’m good.” Messing then proceeds back toward his seat. This is when Ross grabs his legs, pulls him down and attempts to pin him. In an interview Stockdale said, “I didn’t expect it to degrade in the way that it did.”

“The professor was not aware of what we were doing and does not condone that kind of behavior,” Messing said in an interview with The Current.  “This is no more a story than if a student had stubbed his toe demonstrating a dance.” Messing was concerned that local media that came to the campus Oct. 17 would “sensationalize” the incident.  He said, “It was inappropriate, but it was an accident.”

No incident report was filed with the Los Rios Police Department and medical services were not summoned. Stockdale recalled, “Another student said ‘you need stitches or at least a butterfly, (the wound) won’t stay closed otherwise’ and (Ross) registered that and called someone.”

Students in Stockdale’s class the Wednesday after the incident had mixed reactions ranging from dismissal to concern. A majority of the people enrolled in the class didn’t feel this was a major issue that should have drawn local news media.

Communications major Alan Morte, who attended the class the night of the incident said, “It was interesting. It pressed some boundaries. We were off guard and we weren’t expecting it, but at the same time when I went home Monday night and really sat down and thought about it, there were so many rich elements that we pulled out of it. If you would have attended the following class on Wednesday you could have witnessed just how relevant it was to the topics being discussed in class.”