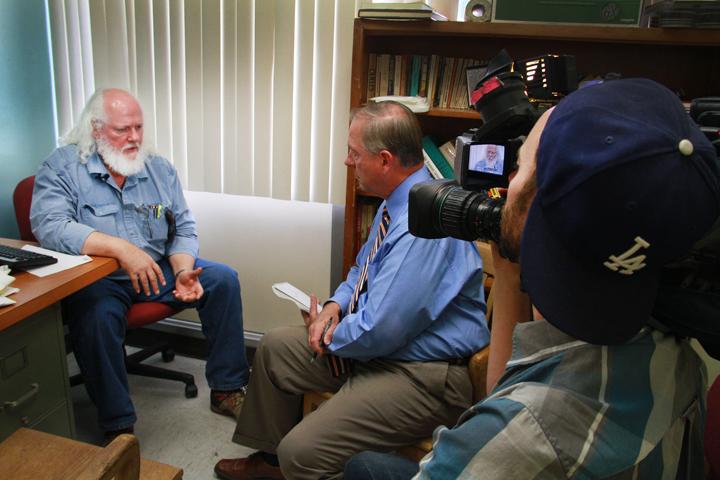 Professor Geoffrey Stockdale sits down with Tom DuHain of KCRA 3 to discuss the impromptu westling demonstration that occurred in his classroom the night of Oct. 14. (Photo by Alisha Kirby)

A student involved in the wrestling demonstration that took place in Professor Geoffrey Stockdale’s Interpersonal Communication classroom at American River College on Monday, spoke to The Current regarding his feelings on the situation.

“There was no altercation,” Kevin Messing, the student performing the take-down in the video, said. “I was demonstrating a grappling maneuver on my friend that caused a small cut above his eye. The professor was not aware of what we were doing and does not condone that kind of behavior. This is no more of a story than if a student had stubbed his toe demonstrating a dance. It was horseplay at best and nobody was hurt.”

Stockdale can be seen in the video sitting at a desk watching the demonstration.

Messing was concerned that local media that came to the campus on Thursday would “sensationalize” the incident.  He said, “it was inappropriate, but it was an accident.”

The Current will update the story as more information is available.

Art has a home at American River College

Be the first to comment on "Update: Student in classroom wrestling match speaks"