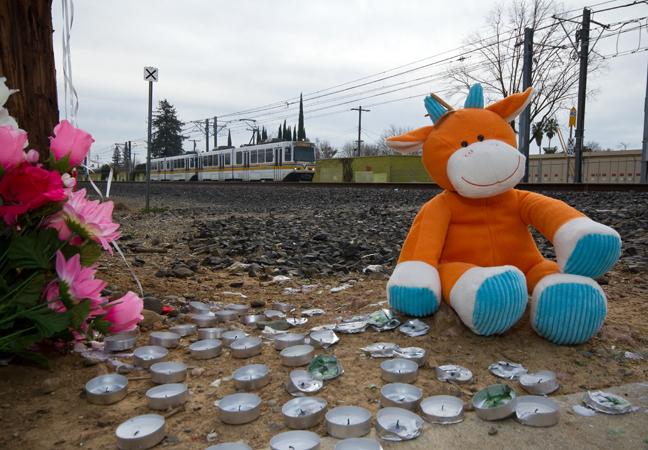 A vigil is set in place near the scene of the Jan. 28 light-rail accident that resulted in the death of two students. (Photo by Bryce Fraser)

Editor’s note: Funeral services for both Louis Leon Williams, Sr. and Shante Williams will be at the Allegheny Weslyn Methodist Church located on 6600 Steiner Drive on Monday, Feb. 20 from noon to 3 p.m. The family encourages those close to the deceased to attend.

The three adults who were in the sport utility vehicle that collided with a light-rail train in South Sacramento on Jan. 28 were all American River College students.

Two adults in the SUV were killed, as well as a 22-month-old toddler. The third adult in the vehicle survived the crash and is currently in stable condition.

Damian’s father Domonick Williams, who is also enrolled at ARC, was at the site of the crash on a recent afternoon, trying to make sense of the tragic event that took the lives of his son, his father and his sister.

At 4:10 p.m. on Jan. 28, the Nissan Pathfinder driven by Louis Williams Sr. was waiting at the intersection on 26th Avenue, near 25th Street, one block north of Fruitridge Avenue, according to information released by the police.

At that time, according to Sacramento Police Department Sgt. Andrew Pettit, “the driver went into the opposite lane, passed the crossing arms and came to rest on the tracks where it was hit by a Sacramento Regional Transit train traveling southbound at approximately 50 mph.”

Reports from the police also state the train, carrying approximately 50 passengers, was on the Meadowview line when it collided with the SUV. The vehicle flipped, coming to a stop on its roof as the train pushed it down the tracks for 20 yards. The train did not derail.

According to reports from the Sacramento Police, both Louis Williams Sr. and Shante Williams were pronounced dead at the scene. Damian Williams was later transported to a local hospital, where he was pronounced dead.

Medical personnel examined 17 train passengers at the scene, police said. Three adults and three minors were later taken to an area hospital and treated for injuries.

Demetric Good Williams, the only person in the SUV to survive, remains hospitalized but is in stable condition at University of California, Davis Medical Center.

“She’s up and talking.” Domonick Williams said. “She is recognizing faces. She knows who you are.”

Sacramento’s light-rail system began in 1987. In the past five years, there have been nine collisions between light-rail trains and vehicles at crossing sections in the Sacramento area, according to statistics given to the Associated Press.

From January 2007 until the accident on Jan. 28, of the nine accidents recorded, only one other was a fatality. An accident in April 2010 killed one individual.

“This is our worst gate-crossing accident we’ve experienced since we opened in 1987,” Mark Lonergan, chief operating officer for the Sacramento Regional Transit District, told the AP.

There are about 75 gate crossings along light-rail lines in the region similar to the one on 26th Avenue.

Sgt. Pettit confirmed that video evidence from both the train and cameras posted near the crossing intersection indicate that the SUV driven by Louis Williams drove into the opposite traffic lane to bypass a vehicle in front of it, around the downed crossing arm, and then onto the tracks where it was then struck by the light-rail train.

However, the idea that his father illegally changed lanes and drove in front of the moving train is still hard for Domonick Williams to believe.

“I refuse to think my dad was that reckless and that he would just jump the tracks knowing he had my son in his car,” Domonick Williams said. “It’s hard because he isn’t here to defend himself. Everyone is pointing a finger and accusing him … and at the same time, it is tearing my family apart.”

According to Demetrius Williams, Louis Leon Williams Sr., who was a registered student this semester at ARC, was born on Oct. 16, 1949 in Shreveport, La.

As a young man, he trained as an auto mechanic – a skill he would practice for 45 years before retiring. Louis Williams Sr. eventually made the cross-country journey to join family he had living in Fresno following the death of his grandfather. He would ultimately settle in Sacramento where he met his then-wife Demetric Good Williams. He is survived by 13 children.

Former ARC student Jennifer Neal was a classmate of Louis Williams Sr. in 2011.

“I met Louis while taking a writing class with him last semester and I remember getting to know him when we would meet in small groups to discuss our writing assignments,” Neal said. “There were times when I had to miss class and it was always Louis who was the first to help me catch up.”

According to her family, Shante Williams was pursing an associate degree in music. She loved to sing and her favorite musician was Justin Timberlake. To support herself, her children and her schooling, she worked at a local McDonald’s restaurant. An avid reader, she enjoyed romance novels and any book written by her favorite author, James Patterson.

Shante Williams is survived by two children of her own – son Jeremiah Williams who is believed to be between 8 and 9 years of age, and daughter Savriel Cohen, who is a toddler being cared for by her birth father Ryan Cohen.

Shante Williams’ brother Demetrius Williams will remember his sister’s warm personality. “She was a wonderful person who will be dearly missed,” he said.

Andrea Waite, a former ARC student and friend of Shante’s, recalls when “right out of high school, I came to American River College and (Shante) immediately be-friended me.” Describing the friend she’ll miss dearly, Waite spoke about Shante Williams’ free spirit and never-ending smile, noting she was “one of the best people you could ever even think of.”

Twenty-two-month-old Damian Williams was the son of Rosa Rubio and Domonick Williams. Damian was born on March 30, 2010.

Demetric Good Williams, who survived the crash, is a journalism major and former staff member at The American River Current.

According to Journalism Professor and Department Chair Tim Swanson, Demetric Good Williams is enrolled in a journalism lab class this semester and had been planning to start a blog about her family.

“She had been talking about writing a book about her children and her grandchildren for more than a year,” Swanson said. “We thought a blog might be a good way to jump-start the process.”

Domonick Williams stated that the family has yet to tell his mother about the deaths of her husband, daughter and grandson. Williams said the reason is because “we don’t think that she is ready, physically or emotionally.”

Williams said that moving forward, he will continue to focus on his mother’s recovery.

“I can’t lose her,” Domonick Williams said. “If there is anything I can do to preserve that and ease her mind, I will do that. When the time comes (to tell her about the accident), it is going to be unbearable.”

Sugarland show leaves a lot to be desired