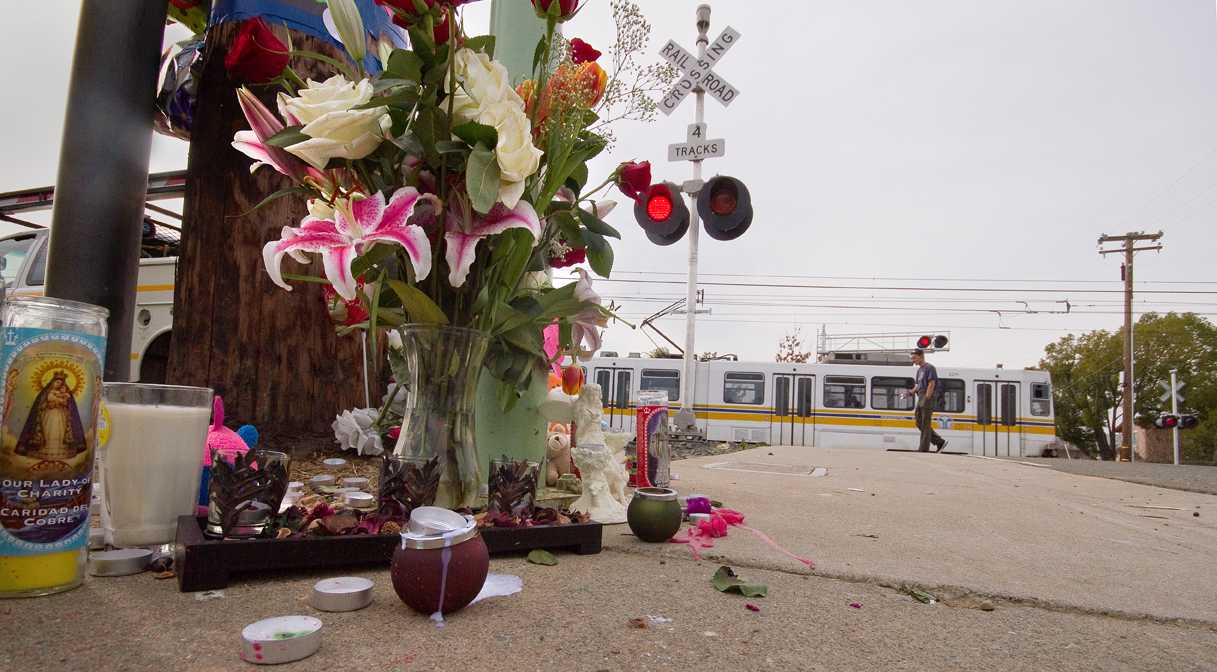 A southbound Meadowview line train travels behind a memorial placed near the crash site of an SUV driven by Louis Williams on Jan. 28. (Photo by Bryce Fraser)

The three adults who were in the sports utility vehicle that collided with a light-rail train in south Sacramento on Jan. 28 were all American River College students.

Two adults in the SUV were killed, as well as a 22-month-old toddler. The third adult in the vehicle survived the crash and is currently in critical but stable condition.

At 4:10 p.m., the Nissan Pathfinder driven by Louis Williams, was waiting at the intersection on 26th Avenue, near 25th Street, close to Sacramento City College, according to police reports. The vehicle went around the crossing arms and onto the tracks where it was hit by a Sacramento Regional Transit train traveling at approximately 50 mph.

According to Sgt. Andrew Pettit, a spokesperson for Sacramento Police Department, the train, carrying approximately 50 passengers, was heading southbound on the Meadowview line when it collided with the SUV. The vehicle flipped and the train pushed it down the tracks for 20 yards but did not derail.

Medical personnel examined 17 passengers at the scene, police said. Three adults and three minors were later taken to an area hospital and treated for injuries.

According to Journalism Professor and Department Chair Tim Swanson, Demetric Good is enrolled in a journalism lab class this semester and had been planning to start a blog about her family.

“She had been talking about writing a book about her children and her grandchildren for more than a year,” Swanson said. “We thought a blog might be a good way to jump start the process.”

Shante Williams was enrolled in five units at ARC this semester, including math, piano and a fitness class, according to those who knew her schedule. Enrollment services confirmed that Louis Williams was a student at the college, but would not confirm his class load.

The Fray tells their ‘Stories’