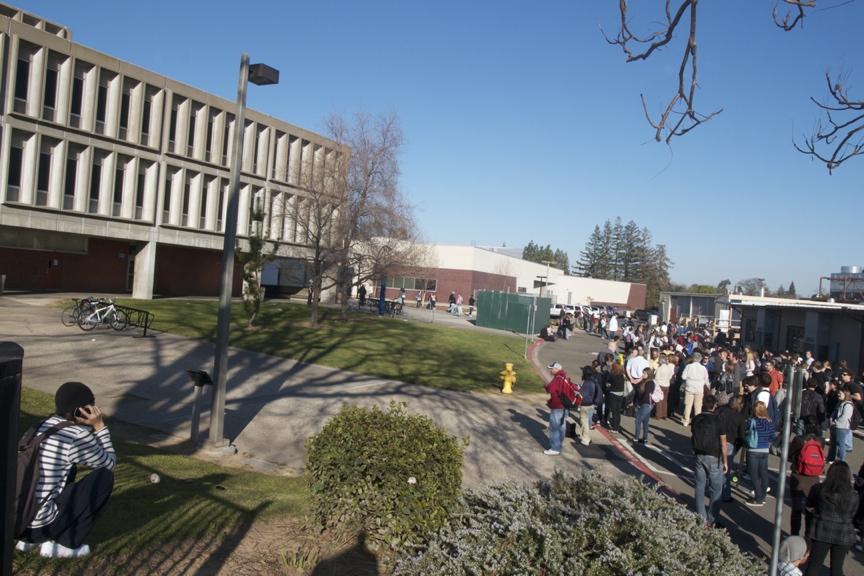 Students evacuate Davies Hall after a bomb threat was called in on Feb. 10, 2011. Photo by Andrew Vasquez

Matthew Todd Gibbs, an American River College student during the spring 2011 semester, has pleaded no contest to the charge that he made a false report of bombs planted in Davies Hall – a felony according to the California Penal Code.

In an e-mail to The American River Current, a remorseful Gibbs explained the reason why he made the first of three false bomb threats: “I wasn’t thinking with a clear head and I made a rash decision to call in a bomb threat in order to avoid taking (a) test.”

Gibbs, 21, was sentenced on Aug. 16 and received a sentence of 90 days to be served at the Rio Cosumnes Correctional Center, where he is set to report on Oct. 11. Upon release, he will be on formal probation for three years. The identification and capture of the bomb-threat caller has been met on campus with a collective sigh of relief.

“It was an outstanding job on behalf of our officers combined with the hard work of the (Information Technology) department,” said ARC Police Captain Chris Day. “I give our department all the credit in the world.”

It took authorities several months to solve the case, and involved setting a trap for the caller.
“A detailed investigation by college police, assisted by Los Rios Information Technology personnel, resulted in the identification of a suspect through the tracking of phone records, collection of additional evidence, and ultimately, questioning of the suspect by college police,” said ARC Public Information Officer Stephen Peithman in a statement.

Police desk clerk Alisha Britton received the first bomb threat on Feb. 10 at 2:45 p.m. as she monitored police dispatch at the Los Rios Police Department on the ARC campus. According to court documents, a male voice warned her that “there’s a bomb in Davies Hall” before hanging up the phone.

Within minutes of receiving the threat, ARC campus police engaged in a district-mandated, threat analysis procedure. They concluded that students and faculty were in danger.

ARC police notified the three faculty members trained by Los Rios District Police in evacuation techniques in the case of an emergency. They pulled the alarm and then worked to evacuate their designated floors in Davies Hall.
Twenty minutes later, as hundreds of confused students and faculty waited behind yellow blockade tape, Britton received another call at police dispatch. The male caller with a similar sounding voice warned her: “You’ll never find it.”

After a 90-minute sweep of Davies Hall, campus police cleared the building, as the search yielded no suspicious packages.

Reports of the bomb threats aired on local newscasts and featured Los Rios Community College District Police Chief Rick Jones explaining that “while no suspect has been identified, authorities are working with information technology experts to trace the origin of these calls.”

One such information technology expert enlisted by Chief Jones was John Parker of the Los Rios Community College District’s IT Technical Services Department. Parker coordinated with AT&amp;T’s Annoyance Call Bureau to develop a system which would allow the collection of data associated with identifying any future bomb-threat callers.
Another threat leads the case to a close

On April 7 at 2:48 p.m., nearly two months after the first bomb threat was received, Britton once again answered a police dispatch call at the campus police station. Once again, a caller claimed that a bomb and an additional explosive device had been placed in Davies Hall.

According to court documents, Britton “stated the caller’s voice and the verbiage were identical to the caller from Feb. 10, as well as the day of the week and the approximate time.”

“Any time we are able to carry out a fruitful investigation, it makes the campus just that much safer,” Quirarte said.

With the evidence on the desk of Sacramento District Attorney Scott Prentice, the Superior Court of California, County of Sacramento, filed a criminal case against Gibbs.

On May 6, “The people of the State of California vs. Matthew Todd Gibbs” was introduced in court. It charged the defendant with two felony counts of making a false bomb threat under Section 148.1(c) of the California Penal Code.

Gibbs remained out of jail save for a single day after posting a $50,000 bond following his arraignment on June 15.
The hearing was held on Aug. 16 at the Sacramento County Superior Courthouse. In return for pleading “Nolo Contendre” to one of the two felony counts, Judge Gary Ransom gave Gibbs a 90-day sentence to be served at Rio Cosumnes Correctional Center and three years of formal probation.

Gibb’s attorney, Eric Hintz, convinced the judge to drop one of the two felony charges. Ransom also allowed Gibbs to participate in a Sacramento County Sheriff Work Furlough program in lieu of continuous incarceration for the 90 days.

Gibbs said he successfully avoided taking a quiz that was worth ten percent of his overall history grade with the first bomb threat. “After feeling so bad about making the first call, I never anticipated making another,” Gibbs said.
In the email, Gibbs said that he was in his final semester at ARC and was planning on transferring to a university.

“All I had to do was pass my spring classes at ARC,” he said.

He said his lack of preparation for an April 7 test led him to call in another bomb threat. “I selfishly did what I thought I had to do to save my chance of getting into the university,” he wrote.

It’s unclear if Gibbs can return to ARC as a student in the future. ARC has a “Guide to Student Rights and Responsibilities,” which establishes a code of conduct by which students must abide. If a student’s action violates this code, “the student must be given a chance to explain and respond to a referral under the policy of due process,” said ARC Dean of Student Development Manuel Perez.

“ARC has treated me with nothing but respect, and I abused it,” Gibbs wrote in his e-mail.  “I cannot begin to apologize enough.  ARC is a wonderful institution, and should always be treated with the respect it gives its students.”

Be the first to comment on "Student admits to bomb threats"