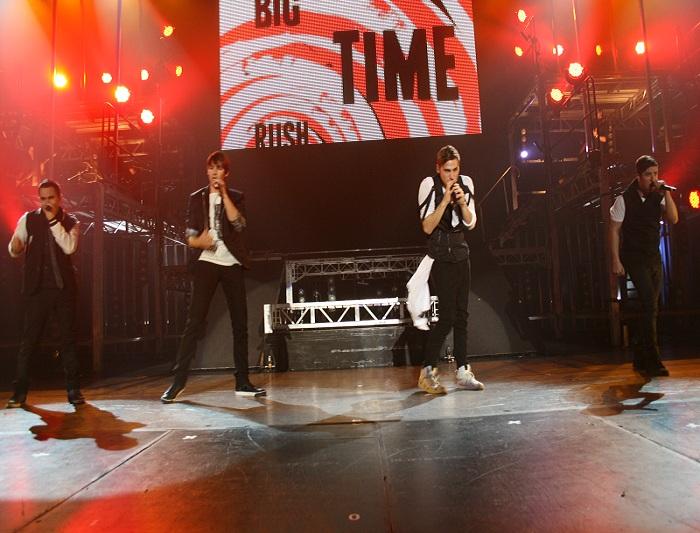 The four members of Big Time Rush performing in Sacramento on Feb. 20.

It was a show that time warped the audience back to the early 2000s, when young women notoriously fainted during live performances from groups such as the Backstreet Boys and *NSYNC (both of which were infamously manufactured by Lou Pearlman).

Big Time Rush is a band that breaks no molds and is content is being the genre’s latest flavor. Put simply, BTR is Kendall (the “Justin Timberlake” leader), Logan (the “Lance Bass” innocent), James (the stolid “J.C. Chasez” elder) and Carlos (the ethnically diverse “Chris Kirkpatrick”).

After watching *NSYNC ride mechanical bulls on stage during a concert at the Oakland Coliseum in 2001, I was sure I had seen it all. Big time wrong!  Kendall, Carlos, James and Logan (no last names needed for these young men … please) had a trampoline conveniently placed center stage where they could perform aerobatic jumps from platform to platform.

However, the visual spectacle of BTR was better than their music. Their set consisted of mostly uninspired songs that (if you dare read the lyrics) would cause most adults to chuckle at their pre-fab, jejune nature.

That is not to say that I agree with industry reviews which have been critical of Big Time Rush alongside creators Sony and Nickelodeon for forming a group whose sole purpose is to sell records. As the recent concert demonstrated, these young men certainly proved that they could hold an audience’s attention.

Put simply, BTR delivered on the hype that incited a crowd of young women to travel from as far as Fresno to catch a glimpse of their fresh-faced idols.

Sacramento’s Memorial Auditorium was filled to capacity over two hours before Kendall, James, Carlos and Logan took the stage.

Tasked with warming the audience was 21-year-old pop singer JoJo, who first bum rushed the music scene seven years ago at the age of 14, with her catchy debut single “Leave (Get Out).”

With two platinum albums under her belt, JoJo decided to leave the music business to attend college. However, petite songstress’ years away from the limelight seemed to have deflated both her fame and vocal ability.

JoJo’s seven-song set included her two most popular songs and a smattering of new material that perhaps signaled a comeback that just doesn’t seem to be in the cards.

For her closing song, the exhausted singer performed “Too Little Too Late” while seated on the edge of the stage. Sweating, she allowed her pre-recorded vocals to anchor the song as she interjected a series of “oooh”s and “yeahs.”

But the 3,000 people in the audience didn’t need a warm-up act to prepare them for the rush. While the show offered no real surprises, it certainly delivered on expectations for the hordes of screaming fans.

Standout songs: “Too Little Too Late” and “Disaster.”

Standout songs: “Superstar,” “Worldwide” and “If I Ruled The World.”

Were you there and didn’t feel the “rush?” Did JoJo’s return to Sacramento bring back memories of dumping that loser you dated in high school? Send me your feedback to [email protected] or follow me on Twitter @kingmlew – I want to hear from you.

311 dials in an indecent performance