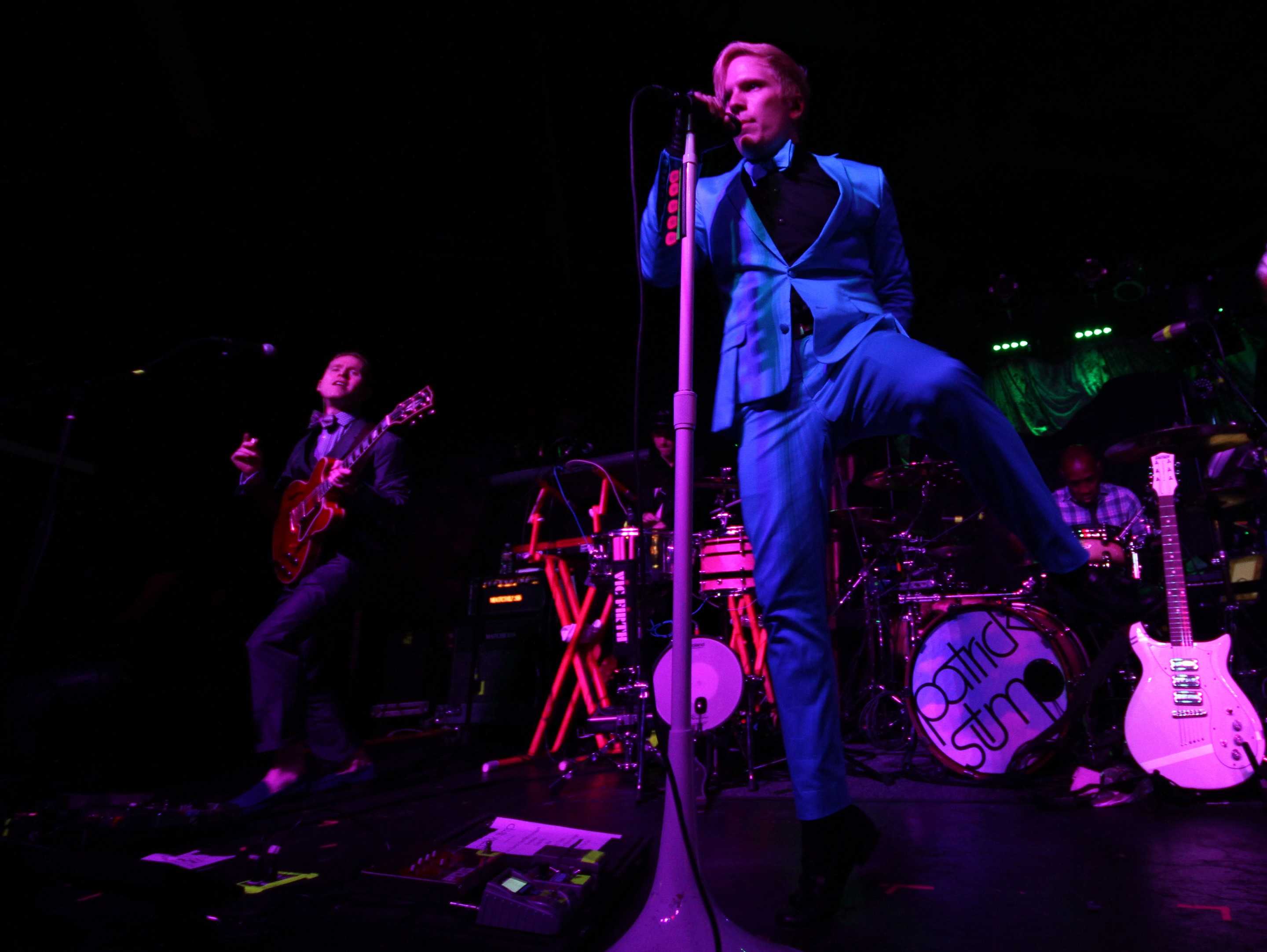 Mark Lewis, News Editor sits down with Fall Out Boy’s Patrick Stump, to discuss the band, his solo career, and his new album “Soul Punk.”

Mark Lewis:  Patrick you’ve acted on television, been the lead singer of an enormously popular punk band, produced music, learned to play multiple instruments and now you’re entering the arena of the solo artist. You’re only 27-years-old – what have you yet to accomplish that you’d like to?

Patrick Stump:  I mean I haven’t done… well I don’t know. I guess I haven’t made the perfect record yet but I don’t know that you ever get to that. It’s the thing that keeps me going. I was just watching an interview with Tony Bennett and he was asked how he keeps going after doing decades of shows and he’s like he wants to keep doing better than the one before. The longer I do it and the more I know – the more I want to do it.

Mark Lewis:  With February’s “Truant Wave – EP,” you wet you fans’ appetite for your first full length solo album, “Soul Punk,” which comes out on October 18th. What can we expect from the new record that is different from the six songs on “Truant Wave – EP?”

Patrick Stump:  It’s a lot funkier. On “Truant Wave” there was a few of songs that might have made sense musically with “Soul Punk” but not lyrically. “Soul Punk” is much more the funkier side of “Truant Wave.” I think “Soul Punk” is a lot funkier than “Truant Wave” and I don’t mean that word in the crappy high school flat-based punk band kind of way.  I mean Rhythm & Blues, Hip Hop and Soul music are all influences on what I do. The most recurring comparisons that I’ve gotten are to Prince and Michael Jackson. In fact, many people will say that my music is just a Prince knock-off or a Michael Jackson knock-off and I think people saying that makes me happy because it doesn’t sound like the same thing.

Mark Lewis:  I had the opportunity to talk to Jordan Pundik of the long time band New Found Glory during a concert stop on their “Pop Punk’s Not Dead Tour” and after years of having his band labeled as “pop punk,” Pundik told me that “this current tour is a way of accepting the pop punk genre badge which I know wear with pride.” Is “Soul Punk” a similar attempt on your part to really establish your own genre or carve-out a niche of sorts?

Patrick Stump:  I think it did very much help carving out my identity as a solo artist. I don’t know if Fall Out Boy is coming back but I think if Fall Out Boy does come back I think I’m personally leaning towards that New Found Glory aesthetic of just embracing the pop punk thing.  I’ve never had a problem with being in a popular punk band.  I’m into that but I also have to be who I am. When I’m not touring or recording with the band, this is the music that I’m playing and listening to. This is a big part of me – take it or leave it. I’m not trying to thumb anybody’s legacy or anything like that. I’m not trying to mess with Fall Out Boy’s legacy or anything like that. This is one of the reasons why I’m doing this as solo music and not trying to force Fall Out Boy to do soul music [chuckles].

Mark Lewis:  The first single released off of the new album is the track “This City.” Is the song about Glenview, Illinois where you were born?

Patrick Stump:  Well first-off, Glenview is not much of a city. I would say it’s more of a suburb. The song is partially about Chicago because I was thinking about the culture of cities. That was kind of the idea. It’s not necessarily fully auto-biographical by the way.  Ultimately, it’s not really important where it’s about. What’s most significant is the idea of community which is very essential and underrated. I was looking at songs like John Mellencamp’s “Small Town” which embraces the idea that “‘I grew up in a small town.’” Granted I grew-up in a suburb and spent a lot of time in the suburbs. Suburbs are just parts of cities and they don’t really have their own identities. They really belong to the city. I still have to pay taxes to the city and I still have to do jury duty in the city. A part of that like I said is the community aspect. When I look at cities like Detroit or I look at cities like New Orleans I feel like those are pretty viable cultures that people find socially acceptable to piss on and I think that’s really unfair and unreasonable. I wanted to have a rebuttal to that. So the song is actually really simple. Lyrically, I didn’t really pepper it with too many metaphors or similes. I wanted it to be straight ahead. I think embracing a city is a profound enough statement for me because I can’t pretend to be from the country because [chuckles] I’m definitely not.

Mark Lewis:  Through the windows of your touring but, what is your impression of our city of Sacramento?

Patrick Stump:  Well, today it’s raining but I’m a Chicagoan so I can respect that. It’s great actually and I really like what I’m seeing and what I’ve seen. My brother lives about three hours away from here and so I’ve been around here a few times. I’ve been in the city while on tour a few times and I’ve always liked it. [Pause] I’m trying to think of good descriptors for it. It’s a very tasteful city. It’s reserved in a great way. Sacramento is a dignified city which I like a lot. It’s not crazy, loud or obnoxious.

Mark Lewis:  I had the opportunity to see you perform in San Francisco a few months ago.

Mark Lewis:  Yeah and I remember you doing a fantastic cover of a Sinead O’Connor song                 however I also got this impression that you’re not that this prototypical piano ballad/acoustic/emo-type of solo artist. Playing tracks off of “Truant Wave” in that small venue – it really seemed to me that you were having a blast. When I think of an artist breaking away from a band and going solo – I think of a bunch of acoustic guitar-driven songs. What’s your mentality when it comes to that and being on hiatus doing your own thing?

Patrick Stump:  That’s something that I’ve kind of had to fight against. There is that natural expectation to be that type of solo artist you described because that’s what other people do and they figure that’s just what you are supposed to do. They figure you’re a guitar player and a singer in a band so that must be what you’re into. And it’s like no man. At the end of the day, I really love Fall Out Boy and I love what we did but I don’t like acoustic/singer-songwriter/emo stuff. That’s not what I would listen to so that’s not what I’m going to put out. For starters I’m first and foremost a drummer. Drums were my first instrument. Rhythm is really everything to me. The less rhythm music contains – the less interesting it is to me. Which leads me to Hip-Hop and Rhythm & Blues and Jazz and Soul and Funk and African music and… you know whatever. I absorb rhythm like a sponge. It’s my favorite thing.  Going solo is funny because there’s this idea that it’s going to be intimate and naked and I’m just going to go out there and play acoustic stuff and that’s really not the naked me.  Naked me involves drums and percussion and a whole slew of instruments. That’s what’s in my heart. Fall Out Boy instrumentally was you know – how do I take my ideas and try and force them through a guitar and bass and drums? If it were up to me, I’d have a hundred people up there playing shakers and things like that [chuckles].

Mark Lewis:  After this tour ends, will there be a Patrick Stump solo headlining tour?

Patrick Stump:  I may do another one. I don’t really know yet. This is really fun for me because I get to open for Panic! [at the Disco]. I haven’t had the chance to tour with them for a long time. They are all good friends of mine and Foxy Shazam seems really awesome. I’ve only seen him once so far but I’ve hung-out with him a lot. I’d love my next tour to be a total surprise and open for somebody totally out of left field. I’d love to open for someone where there aren’t any audience expectations. Most people at the Panic! [at the Disco] show know who I am. I’d love to open for. . . I don’t even know. I think that would be really where you can really earn your stripes and find-out if you’re worth your salt or not. If you can win over those audiences who’ve never heard of you, that’s saying something. I love challenges. I think it would be really fun to be thrown in the fire with some audience that has no idea who I am or what to expect. I’m just playing everything by ear right now because I just really want to get out there and play.

Mark Lewis:  Patrick, I want to thank you for taking the time to answer questions for our visitors to https://www.arcurrent.com/. Before I let you go – I’ve got to ask you if you’re watching your Chicago Bears play tonight on “Monday Night Football?”

Patrick Stump:  No problem man – thank you guys. [Laughs] No I’m not watching the Bears tonight. I actually don’t think we even have ESPN on the bus right now. It’s really hard to keep-up with sports when you’re on the road. I had a bunch of press earlier when I realized they were playing tonight and I was like damn! I have a lot of friends though who’ll keep me up to speed on the game I’m sure.

Mark Lewis:  Patrick thanks again for your time and the best of luck to you going forward with the new album and tour.

Patrick Stump:  Thanks a lot man. Thanks for having me.

Viar up for top position in Southern California