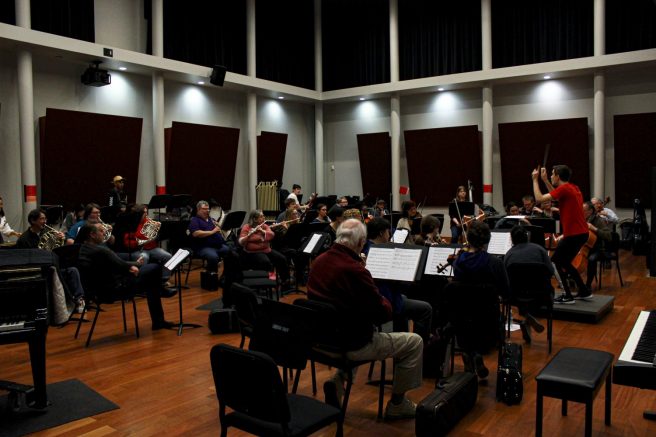 Composer Colin Regan conducts the orchestra practice for the Aria Concert, in the band room at American River College Main Theatre, every Wednesday at 7 p.m - 9:30 p.m. (Photo by Bram Martinez).

The orchestra concert “Aria Concerto” will premiere in the American River College Main Theatre on March 13-14. In preparation for this, the students involved haved practice every Wednesday from 7 – 9:30 p.m. This practice has included the composers, the soloists, etc, in preparation for the oncoming concert.

Jessica Esposito and Tyler Kashow are professional orchestra players who are paid to join the ARC orchestra to both balance out the orchestra and give the students experience to play with professionals. Esposito plays flute for the ensemble while Kashow plays the bassoon.  They are both playing Mozart, Esposito playing “Flute Concerto in D-Major” while Kashow plays the “Bassoon Concerto in Flat-D.” Essentially, the students got to choose what to play, and they auditioned to do a solo piece, according to Espositio and Kashow.

“There are 26 people who auditioned, and they chose 13 [soloists],” Kashow said.  “This concert will give a good number of people the spotlight, which is experience not many people get.”

Those that were chosen to do a soloist piece play in front of everyone, using their skill alone. The reason why this is important is that they have something to put on a musical resume for future musical use according to Esposito and Kashow.

“I am definitely going to use this experience for the future, because it is just a good experience to have,” Esposito said.

Not only are there musicians who are playing, but there are composition majors who constructed their own pieces that will be played for the first time. Composers like Connor Manion-Quiaoit  and Colin Regan, composed a piece that they will conduct at the concert. When the coordinator chooses composers for their pieces there is a range of factors, but the reasoning remains simple, through meaning and talent.

“The more meaning your piece has, the more likely your work will come through,” Manion-Quiaoit said.

Some of these composers have a good amount of experience under their belts.  Regan has been composing for seven years and has composed for the Camellia Symphony Orchestra and organized a few ensembles.  His piece is called “The Dream.”

“Compose the music that calls to you, stay true to the music your heart wants to compose,” Regan said.

Be the first to comment on "Upcoming noteworthy concert"