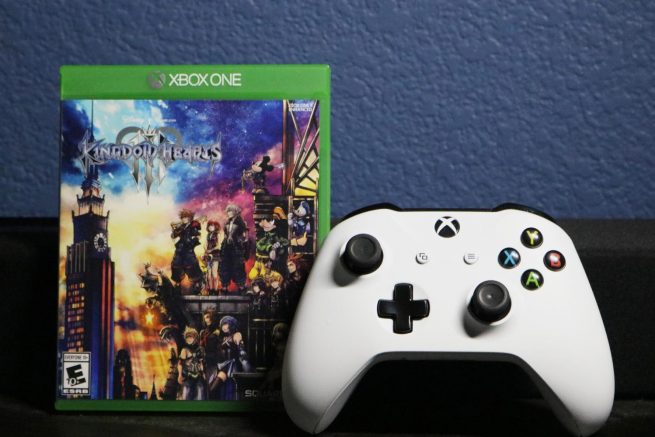 “Kingdom Hearts III” is the first game of the series released for the Xbox One console. (Photo illustration by Thomas Cathey)

“Kingdom Hearts” fans have been waiting nearly 14 years for the next main installment of the video game series. The time to rejoice has finally arrived. Amid high expectations, Square Enix released “Kingdom Hearts III” worldwide on Jan. 29 for Xbox One and PlayStation 4.

Was the wait worth it? Luckily, the game manages to quench the thirst of anticipating fans, while also giving newcomers a fun experience as well.

Square Enix and Disney first collaborated in 2002 to produce the original entry in the critically-acclaimed franchise. “Kingdom Hearts II” was released in December of 2005, and since then, faithful Kingdom Hearts fans have had plenty of remasters and spin-offs of the series to hold them over for the next 13 years. “Kingdom Hearts III” is the first game of the series released for Xbox One consoles; the other installments were all sold exclusively on PlayStation and Nintendo platforms.

The latest chapter in the Kingdom Hearts story picks up chronologically after the events of the 2012 Nintendo 3DS title, “Kingdom Hearts 3D: Dream Drop Distance.” The game follows the main playable character, Sora, as he teams up with some of the most beloved characters in the Disney universe. Donald Duck, Goofy, King Mickey, among others, make appearances in the game. Together — Sora, Donald, and Goofy — travel through multiple Disney-themed worlds, like Toy Box (from “Toy Story”), Monstropolis (“Monsters Inc.”), and San Fransokyo (“Big Hero 6”), to take on the Heartless and regain Sora’s “power of waking,” which is the ability to restore the lost hearts.

The latest chapter in the Kingdom Hearts saga is an aesthetically pleasing one, filled to the brim with colorful imagery during the cutscenes and gameplay. Each world is meticulously constructed, oozing with nostalgia and fantastic attention to detail. For example, Toy Story fans might recognize just how similar Andy’s room looks in the game compared to the movies.

Characters look and sound just how they should, as the game feels like a classic animated Disney movie mixed with “Final Fantasy” elements. Gamers who are familiar with the series — the harshest judges of the game — should be fairly satisfied with the way the game is designed.

As for gameplay, “Kingdom Hearts III” employs a ‘hack and slash’ combat system, with the all-righteous Keyblade being the main weapon of attack. After accruing a certain amount of damage with the Keyblade, Sora unlocks the ability to a perform special attack, and can even summon actual Disney theme park rides to deal out damage to his foes. These attacks vary depending on the world Sora is in, and this prevents the attacks from becoming too repetitive.

Although players might spend most of their time wielding the Keyblade, it is not the only weapon in Sora’s arsenal; players can choose from water, fire, thunder, and air-based magic spells to fight off their enemies.

Gamers who are new to the series may be hesitant to purchase the game, as 17 years of lore can be intimidating. There is a brief recap of past events in the “memory archive” feature located in the main menu, so new players will not feel as lost while following the story.

A large amount of the playtime is spent viewing cutscenes, and while it may be necessary to move the story along, it felt a little excessive. Waves of enemies are followed almost immediately by cutscenes, which can interrupt immersion at times.

Players can expect to spend at least 30 hours on the game if they only focus on the main story. Others who want to spend more time exploring the game can probably squeeze another 10 hours out of it.

After all of the hype built up over the years, it is remarkable that “Kingdom Hearts III” can satisfy the hunger of longtime fans, while also appealing to new fans that have never touched any of the previous installments. This, combined with the exciting and immersive gameplay and story, make this game worth every penny of its base $59.99 price.