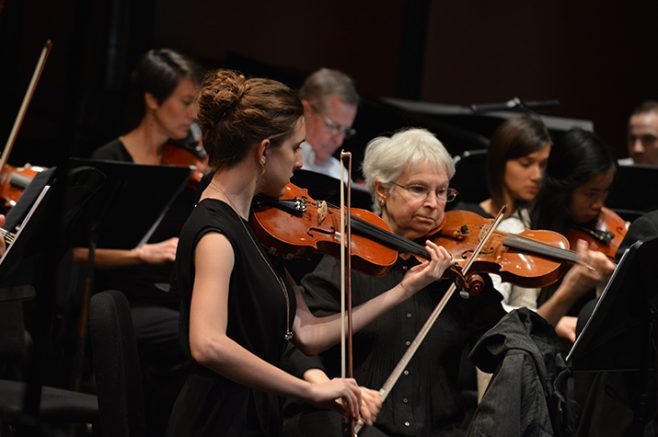 Members of American River College's Orchestra practice ahead of concert's on March 9 and 10. (Photo Courtesy of the ARC Orchestra)

The American River College Orchestra will unveil all the hard work of its soloists in a concert in ARC’s theater Friday and Saturday at 7:30 p.m.

“This concert is a chance for the soloists to shine, to show the audience what they’ve got, to display the reward for their blood, sweat, and tears,” composer Jonathan Fong said.

Two pianists, three vocalists and a violinist will be featured in the concert. Two composers on the orchestra will contributing two new compositions to the show.

For an extra treat, a bassoonist will perform a solo in the show as well.

Fong said the vocalists and instrumentalists have been working tirelessly since last semester to prepare for this concert.

“These are very challenging pieces our instrumentalists and vocalists are doing, and they’ve been working hard at them since last semester, when the auditions for this concert were held,” Fong said.

Composers on the orchestra had their work cut out for them as well.

“It wasn’t easy for the composers, either: a lot of sleepless nights were spent working on those pieces, with each individual part being written from scratch,” Fong said.

Olga Dubenchuk will perform a solo and is looking forward to showcasing her talents.

“I am looking forward to this concert with a great deal of excitement, – it’s always such a joy to see all sorts of people unite around music,” she said.

“Listening to [“Ave. Maria”] often brought tears to my eyes; it’s simple yet elegant melody touches the soul of listeners and carries them away from daily commotions to a heavenly place for a brief moment,” Dubenchuk said.

Fong believes this concert will be a great chance for students to explore different styles of music they don’t usually listen to.

“This is a great opportunity for people who aren’t typically interested in, and perhaps have never been to an orchestra concert to give it a try,” Fong said. “With such a mix of styles and performers, there’s a good chance that everyone will find something they like.”

Tickets are $15 for the general public and $10 for students.