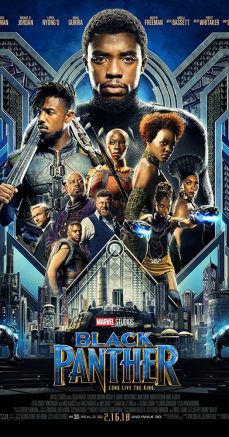 Marvel’s “Black Panther” franchise has it’s very first movie in the Marvel Cinematic Universe and thankfully, it is one for the ages.

The film has a predominately black cast with Chadwick Boseman as King T’Challa/ Black Panther, Michael B. Jordan as a U.S. black-ops soldier Erik “Killmonger” Stevens who wants to be King, and Lupita Nyong’o as Nakia — T’Challa’s lover and a spy.

The film also features Martin Freeman, Andy Serkis, and Daniel Kaluuya from the Oscar nominated and 2017 horror-thriller “Get Out.”

Just based-off of the quality of the cast, it would be apparent that “Black Panther” is one of the best Marvel films in its franchise, and but it also represents a big budget, honest portrait of what African-Americans in this country face, as well as respectfully honoring African culture.

The story starts long before T’Challa’s father’s death — which we saw in “Captain America: Civil War” — the film begins in Oakland, California, (where director Ryan Coogler, a Sacramento State graduate, happens to be from) with some young kids outside playing basketball, before it cuts to two men being questioned by King T’Chaka (T’Challa’s father) in an above apartment.

Here, without spoiling a major narrative thread, the film sets up the realities and the hardships of what the Black community faces within America’s broken societal structures and how that plays into T’Challa’s fictional home country of Wakanda.

Fast-forward to the present, where T’Challa is taking the throne as King of Wakanda, but his ceremony is cut short.

Ulysses Klaue, played by Serkis, steals an item with Killmonger that is from a museum in England, but is actually a valuable vibranium weapon from Wakanda. Because of this, along with Klaue’s past of stealing other vibranium weapons from Wakanda, T’Challa and the country want Klaue, but he is ultimately killed by Killmonger, which he then takes Klaue’s dead body to Wakanda.

From there, Killmonger challenges T’Challa for a chance as King, and his motivations are to put Wakanda on the map and start giving their vibranium weapons to the other countries. Vibranium is what Wakanda found thousands of years ago and is what built the city.

Fans of the Marvel Cinematic Universe will recognize vibranium as the material that  Captain America’s shield is made out of.

Wakanda is the most advanced technology in the world and having vibranium, the strongest metal in the world. The country is built-off it and “haven’t even scratched the surface,” says Klaue. This is exactly what Coogler wanted in this film, Wakanda being a third-world African nation that has hope, and serves pride, as to where some African nations in reality serve today. What Killmonger wanted in this film was to stop being in the shadow and no longer isolate themselves from the rest of the world and to start helping other countries who don’t have the type of technology and food to survive.

Coogler’s idea of Wakanda was to be something more than a third-world country, it’s a country that provides to support the people that are there and that everyone isn’t singled out and each have a role.

“Black Panther” is a cultural movement for black people everywhere. The film represents the African experience and politicalness. From earlier, Wakanda is a sign of nobility and pride that will come in the future. For the African-Americans in this country today as it secretly talks about racism that is continues.

But along with illustrating a film about, for and promoting Black excellence, the film also has a welcoming feminist slant.

This is seen most heavily with the film showcasing an all-women army in Wakanda, an element we rarely see in films. It expresses women, African women specifically, in a way that shows the massive importance women can play in society, in politics, and in the a country’s defense system. It shows powerful messages throughout the film, and the writing brings the significance of it all.

The film is also accompanied by the “Black Panther Soundtrack” album that was created entirely by rapper Kendrick Lamar and T.D.E. The soundtrack has features from T.D.E. members ScHoolboy Q, Ab-Soul, Jay Rock and SZA. Other features from Future, Travis Scott, The Weeknd, and northern California’s SOB x RBE from Vallejo and Mozzy who is from Sacramento. It was released one week before the film.

“Black Panther” made over $240M over four day weekend, highest since “Star Wars: The Force Awakens” in 2015. It will be one of the highest grossing Marvel films, outside of the first “Avengers.”

That said, is “Black Panther” one of the—or the—greatest superhero films of all time? Of course, it’s up to anyone’s opinion but let’s take a look back on some other great superhero films.

There is famously Christopher Nolan’s “The Dark Knight,” which came out in 2008 with Christian Bale and the legend Heath Ledger. There are comparisons that Jordan’s “Killmonger” is the best villain since Ledger’s “Joker.”

We got “Wonder Woman” just last year and that was indeed thrilling, with an outstanding performance by Gal Gadot, Chris Pine and Robin Wright. The film was great, but more importantly proved superhero films are not just for the men, but that women play a role in being a superhero’s themselves.

Lastly, there is Pixar’s own “The Incredibles” that came out in 2004, and was something that provides young kids at the time, like myself, and even today, some superhero action with some comedy. This is one of the better superhero films that has the great power of bringing the family around and watching an awesome movie.

But “Black Panther” rises above each with its immense real world power, and proves to be absolutely phenomenal in every way. It is an early Christmas present for Marvel, and one that they would have all dreamed to have. It’s the movie that we have been waiting for and it’s revolutionary, both in production and in release to the public. The society should all be proud of this film, as Coogler doesn’t disappoint. Everyone that was apart of this film made history and Coogler set the bar with “Black Panther.”

All hail the King.

Be the first to comment on "‘Black Panther’ shines, expresses black excellence"